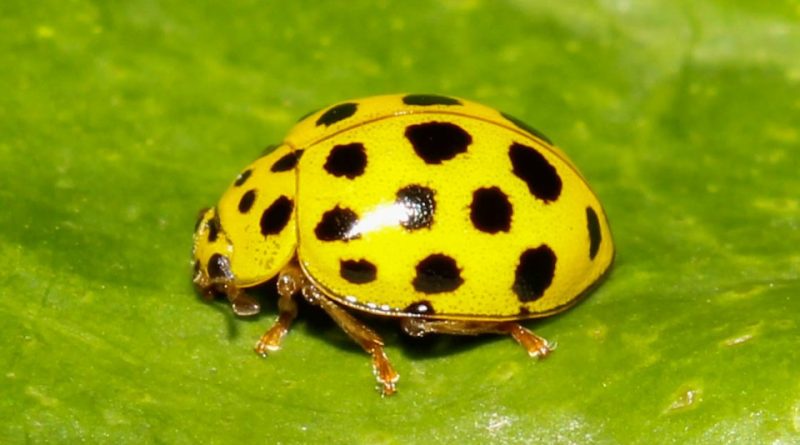 The 22-spot Ladybird (Psyllobora vigintiduopunctata Linnaeus, 1758) is a beetle belonging to the Coccinellidae family.

Geographic Distribution and Habitat –
The 22-spot Ladybird is a beetle that lives, indicatively, throughout the Palearctic region and the oases of the deserts, with the exception of the tundra. It has also been reported in the United States but does not appear to be widespread.
It is widespread throughout Europe and also in Asia, particularly in Iran.
It is present in Italy, including the islands, from the plain up to 1200 meters.
Its habitat is that of gardens and fields on grass, shrubs and low branches of trees, where it feeds on molds and will therefore usually be found on plant essences where these concentrations appear more frequently, such as oak, sycamore maple. and the dogwood. Among the herbaceous plants, the favorite seems to be the hogweed. It should be noted that some authors also mention it on most of the Apiaceae, Fabaceae but also on other common plants (roses, nettles, bracken, brambles, thistles, burdock, ivy, etc.).

Morphology –
Psyllobora vigintiduopunctata is a 3-5 mm long ladybug with yellow elytra with 22 black points with darker yellow antennae and limbs, with the outer edge of the tibia black and with the presence of sexual dimorphism.
It has a yellow or white pronotum with 5 black spots.
The adult has a yellow head with a black mark on the vertex or on the back of the head, with a shield often bimaculated in the male and with a black spot in the female that extends over the upper lip.
The design of the two elytra can vary but chromatic variations nevertheless seem rare. It should be noted that in the male, the pronotum is sometimes lighter than the elytra. The belly is usually black while the legs are often dark or entirely brown.
The larvae have a blackish head speckled with yellow and the integument, also yellow in color, is marked on the pronotum by 4 black macules united in lateral pairs. There are also 4 black spots on the abdomen, also grouped in pairs on the sides (sometimes only two lateral black spots on the first visible segment).
The chrysalises are fixed on a vegetal support, often a leaf and have a smooth yellowish body, with four or five black spots arranged linearly on each single segment.

Attitude and Life Cycle –
Psyllobora vigintiduopunctata has a distinctly out of phase annual cycle if compared to that of ladybugs that feed on aphids. In Western Europe, the larvae are observed mainly from late July to early September, the optimal period for the development of rust on hogweed. The birth of the new generation takes place towards the end of summer and the winter diapause also begins later and lasts until the following spring. The larva feeds on molds.
At the adult stage, it spends the winter near the ground, sometimes heaped in tufts of grass, among the dead barks and also among the felted and rolled leaves.
Its complete development in nature has not yet been well determined but in a controlled condition in the laboratory, it takes 18 to 24 days to complete the egg – larva – adult cycle, depending on the type of mold used as nourishment. The higher the average temperature, the shorter the development. Fertility also varies enormously, ranging from 20 to 100 eggs and is partly linked to temperature and nutrition.
The period of activity goes from March to November and feeds mainly on aphids and fumaggini, microscopic parasitic fungi that cover the leaves with a thin white patina, such as cochineal. The feeding of the larvae is very similar to that of the adults, in fact they also feed on aphids and fumaggini.

Ecological Role –
The Swedish naturalist Carl Von Linné was the first to describe this species, placing it in the genus Coccinella along with 36 species, among which are the well-known Seven-point Ladybird and the Colonial Ladybird.
This yellow ladybird is part of some phytophagous species but unlike others, their larvae and adults are strictly mycetophagous, frequenting trees and shrubs, where they feed exclusively on molds of the order of Erysiphales (ascomycetes fungi), which they find on the leaves. More precisely, they devour the hyphae (vegetative mechanisms composed of basic filaments) and the conidiospores (spores) of these molds.
The Ladybird lives in the herbaceous and shrubby layer, rarely above one meter from the ground while other species live among the fronds of the trees. This does not prevent it from assiduously frequenting the foliage of woody plants but it is always about young suckers, bushes or low branches.
Extensive studies have shown that this ladybug, from the first larval stage up to the adult state, consumes the quantity of mold spread over an area of ​​30 cm² every day.
Given the nutritional characteristics of Psyllobora vigintiduopunctata, some American agronomists thought they could use its micophageal abilities to clean the vines from rust but soon abandoned their attempts. In fact, the ladybug consumed molds but at the same time reinfected the plant by carrying the powdery mildew conidia on the skin.
As for the threats and protection measures of this species, it is emphasized that in Western Europe the populations of this ladybug do not seem to be threatened by human activities. It is also true that they live on plant species that are poorly sprayed with pesticides.
The populations seem stable and Psyllobora vigintiduopunctata does not appear, as for the other ladybirds, on the list of protected species by the European Community, as well as on a national scale, on the French and Belgian lists.
This ladybird is also affected by some parasites which, albeit in limited numbers, must be reported; in particular some flies such as Phalacrotophora fasciata (Phoridae family) and Homalotylus flaminius (Encyrtidae family) as well as small wasps of the Braconidae family such as Dinocampus coccinelae. The populations of Psyllabora seem, however, little affected by the parasitism.
Furthermore, this species is not used in biological control.