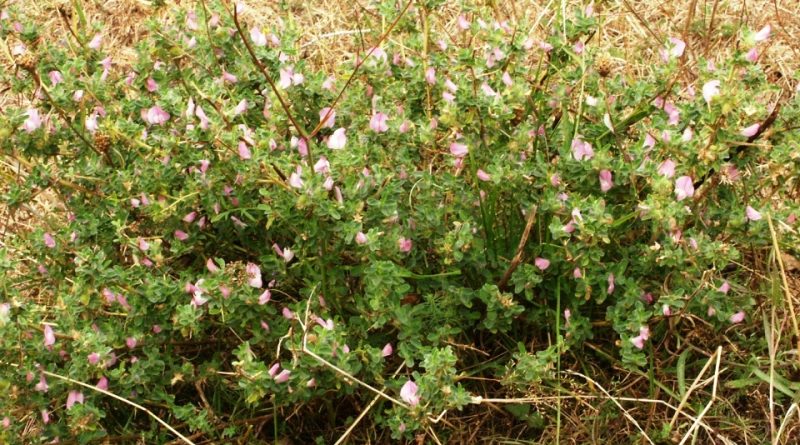 The spiny restharrow (Ononis spinosa L.) is a small thorny shrub belonging to the Fabaceae family.

Etymology –
The term Ononis comes from the Greek ὄνος ónos donkey: good plant for donkeys.
The specific spiny epithet comes from spina spina: as a thorny species, covered with thorns.

Geographic Distribution and Habitat –
Ononis spinosa is a Euro-Mediterranean species with an area centered on the Mediterranean coasts. The plant is widespread in Europe but is also found in Asia Minor and North Africa.
In Italy it is found in arid or uncultivated meadows and at the edge of paths with an altitudinal distribution that goes from the plain to about 1300 m s.l.m.
Its habitat is that of arid meadows and pastures, along the edges of roads and fields, on sand dunes. This plant is found mainly in clay or limestone soils in sufficiently sunny areas. It contributes to the improvement of the soil in poor and sandy soils as it fixes atmospheric nitrogen. 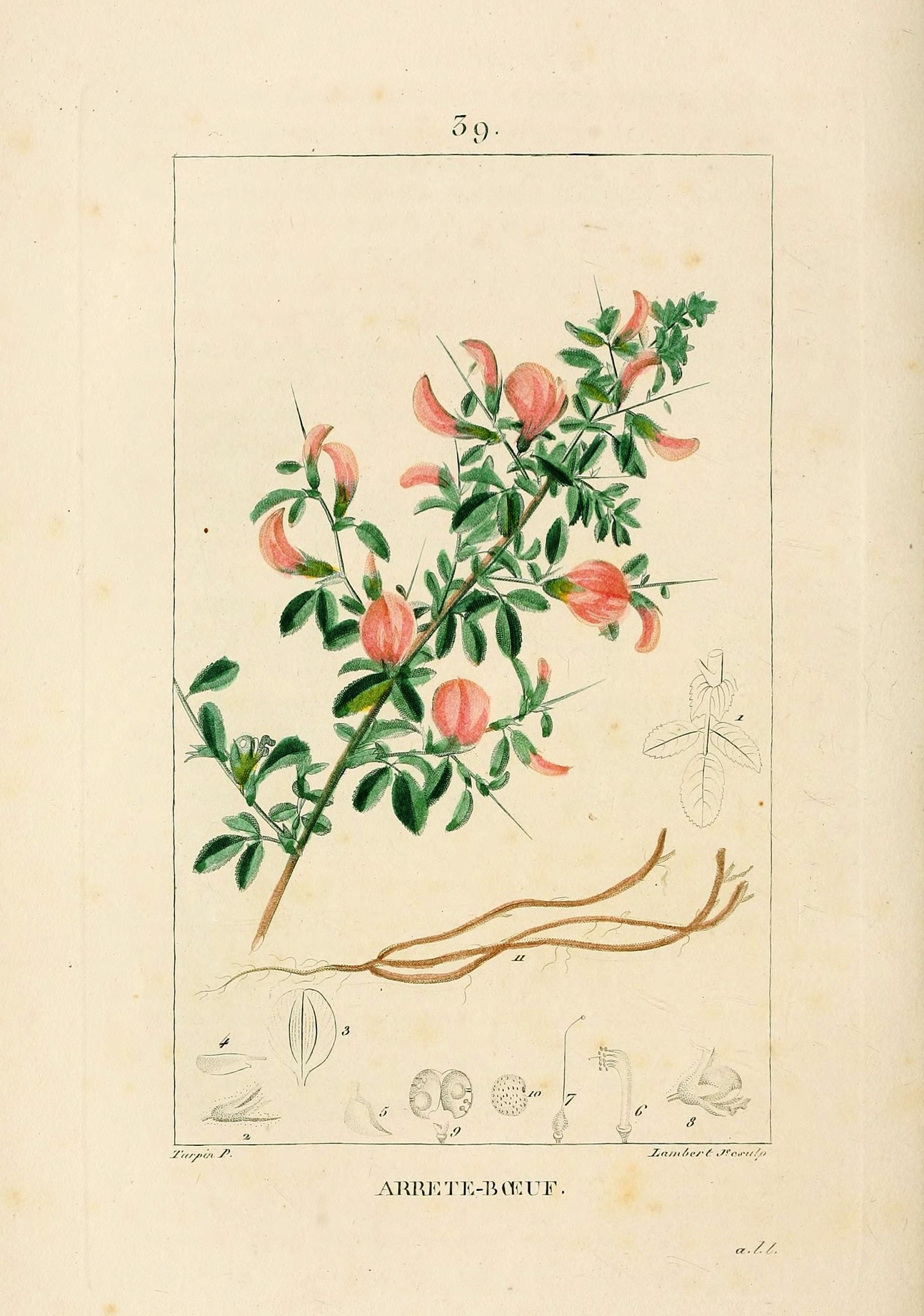 Description –
Ononis spinosa is a small perennial thorny shrub, erect, with the stem often lignified at the base and up to 60-70 cm tall.
The stem is bristly, branched and fluffy and almost always thorny.
The leaves are small, dark green, oval or trefoil, with toothed leaf stipules at the base. The flowers are deep pink and white, fragrant, with shorter wings than the hooked keel and the calyx usually shorter than the pod.
The fruit is a hairy legume, as long as the calyx. The surface of the fruit is glandular and hairy. Inside there are one to four dark-colored rounded seeds.

Cultivation –
Ononis spinosa is a plant that was harvested, especially in the past, in its natural state for local use as a medicine and occasionally as a food.
The plant mainly prefers stony and dry soils in solitary formations or not in meadows, edges of fields, scrub and sometimes river banks; it grows on clayey and calcareous soil.
It is a moderately cold hardy plant, able to tolerate temperatures down to around -20 ° C when fully dormant.
For its cultivation it should be taken into account that it prefers a sunny position in a well-drained soil with a neutral to alkaline pH.
This species has a symbiotic relationship with some soil bacteria, these bacteria form nodules on the roots and fix atmospheric nitrogen. Some of this nitrogen is used by the growing plant, but some can also be used by other plants growing nearby.
Propagation can take place by seed which must be scarified or pre-immersed for 24 hours in warm water. It can be sown directly in the open field in mid-spring or in seedbeds and then transplanted.
Propagation can also occur by division just before the start of new growth in spring.
Larger divisions can be planted directly in their permanent locations. It has been seen that it is better to repot the smaller divisions and grow them in a slightly shaded area and then transplant them in late spring or early summer.
Another method of propagation can be by cuttings in the period of September.

Customs and Traditions –
Ononis spinosa has a historical use in various countries.
In medieval Russia, it was used for the production of Bulat steel. Although the original process has been lost, it is known that it involved immersing the finished weapon in a tank containing a special liquid of which the extract of this plant was part (the name of the plant in Russian, stalnik, reflects its role. historical).
Also in traditional Russian herbal medicine it was used as anodyne, antiphlogistic, aperient, coagulant and diuretic.
A decoction of restharrow was used for eczema and other skin problems, hemorrhoids, chronic constipation and infections of the anus.
The roots of this plant are an ingredient in herbal blends that are used for use as a diuretic and antidiabetic.
It is sometimes grown as an ornamental plant in gardens.
The whole plant is pleasantly scented when stepped on or shredded.
It is also used edible and the young cooked shoots are consumed.
The roots are chewed for their licorice flavor.
The flowers are used as a decoration on salads.
In the medicinal use of Ononis spinosa, the roots, leaves and flowers are used which are antibacterial, antifungal, antitussive, antiviral, aperitif, cytotoxic, diuretic and lithotripic.
The root contains an antidiuretic fixed oil and a diuretic essential oil. If diuretic action is required then the root must be infused and not decocted or the essential oil will be evaporated.
An infusion is used in the treatment of dropsy, inflammation of the bladder and kidneys, kidney stones and rheumatism.
The plant is used externally to aid in wound healing and to treat gout, eczema and other chronic skin ailments.
A cough mixture is made from the bark.
The roots contain the ononin glycoside which acts as a mild diuretic.
The plant contains among other things: isoflavonic glucoses, saponin, ononin, onocerin, biocanine, menthol, tannin, citric acid.
Among other uses, in ancient times the young ends of this plant were used to obtain dyes of various colors (green, yellow but also red).

Preparation Method –
As seen, various parts of the plant are used of Ononis spinosa.
The roots are used occasionally; they are harvested in the fall, sliced ​​and carefully dried for later use.
Young shoots are most commonly used, fresh or dried, and can be harvested all summer long.
The young leaves, still forming young shoots, can be used in salads with a flavor that is close to that of broad beans.
Flowers are also used.
According to some sources it should be used sparingly for an alleged toxicity.