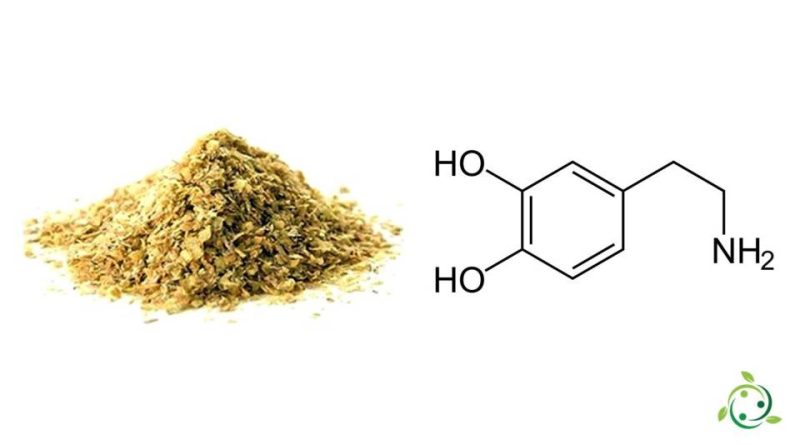 Dopamine, whose term in the official IUPAC nomenclature is: 4- (2-aminoethyl) benzen-1,2-diol.
Dopamine is a hormone also known by the alternative names of: 2- (3,4-dihydroxyphenyl) ethylamine, 3,4-dihydroxyphenylethylamine or 3-hydroxytyramine.
This molecule has a brute or molecular formula: C8H11NO2 and is an endogenous neurotransmitter of the catecholamine family. Within the brain, this phenylethylamine functions as a neurotransmitter by activating specific dopamine receptors and subreceptors.
Dopamine is produced in several areas of the brain, including the substantia nigra and the ventral tegmental area (ATV). Large quantities are found in the basal ganglia, especially in the telencephalon, the accumbens, the olfactory tubercle, the central nucleus of the amygdala, the median eminence and some areas of the frontal cortex.
Dopamine is also a “neurohormone” released by the hypothalamus. Its main function as a hormone is to inhibit the release of prolactin from the anterior pituitary lobe. At the gastrointestinal level, its main effect is emesis.
Dopamine is known as the euphoria hormone, as its presence is linked to the sphere of pleasure and the reward mechanism. Anything that gives us pleasure, such as food, sex, but also music or the consumption of drugs, is capable of arousing a feeling of fulfillment and gratification by increasing dopamine levels.
However, this neurotransmitter also intervenes in the regulation of other very important functions of the body, at the level of the central and peripheral nervous system. It is responsible for muscle control, but also for personal motivation, sleep, mood, memory and learning.
In addition, it behaves like a hormone preventing the release of prolactin by the lactotropic cells of the pituitary. Finally, at the level of the gastrointestinal system, it is responsible for the sensation of nausea and vomiting.

Dopamine functions –
The functions performed by dopamine in the central nervous system can be summarized as follows:
– movement control: dopamine is essential to allow a correct balance of motor activity. Low levels of this hormone are at the origin of Parkinson’s disease, while excessive dopamine secretion causes the onset of nervous tics;
– feeling of pleasure: it is certainly the best known function of dopamine. This chemical mediator is able to release a feeling of psychophysical well-being and deep satisfaction;
– reward mechanism: dopamine predicts reward, in the sense that it gives us the right motivation to reach our goals;
– inhibition of prolactin production: this hormone is able to inhibit the secretion of prolactin by the anterior pituitary lobe. In this case, dopamine is called Pif (prolactin inhibiting factor);
– warning: low levels of this hormone are associated with distraction and inability to concentrate;
– memory: dopamine is essential above all to stimulate the so-called ‘working memory’, that is, that part of short-term memory that allows us to store and process fundamental data and concepts in our daily activities;
– learning: high dopamine levels are associated with a high learning ability, also favored by the stimulation of memory;
– sleep: this hormone regulates the body’s circadian rhythm, favoring the alternation between sleep / wakefulness;
– mood: like serotonin, this neurotransmitter is able to affect mood, resulting in a state of general psychophysical well-being.

Defect in dopamine –
Dopamine being essential to ensure skeletal motility and the control of muscle movements, its insufficiency can be at the origin of some diseases, including serious ones, including:
– Parkinson’s disease;
– attention deficit hyperactivity disorder (ADHD);
– fibromyalgia;
– depression;
– restless legs syndrome;
– burning mouth syndrome (severe burning in the mouth in the absence of lesions);
– addiction to psychotropic substances.

Excess dopamine –
On the contrary, high levels of dopamine do not allow the muscles of the body to be controlled, and are often the cause of nervous tics and uncontrolled movements. Furthermore, excessive levels of this hormone can lead to schizophrenia and psychotic behaviors.
The irrepressible pursuit of pleasure and gratification, associated with a high level of dopamine, finally characterizes the manic (euphoric) states of bipolar syndrome. In this phase, inhibitions of any kind fall, and the subject experiences intense sexual activity and an irrepressible compulsion towards shopping.
Remember that endogenous dopamine, that is, the dopamine produced by our body, cannot be increased orally, since this molecule is unable to cross the blood-brain barrier, which divides the blood from the central nervous system.
Therefore, to increase the levels of this hormone, it is necessary to administer it directly in the form of a drug, or to take substances that mimic its action or even molecules that promote its secretion.
The chemical process through which dopamine is produced is characterized by a series of reactions, which follow one another according to the following scheme:
phenylalanine -> tyrosine -> levodopa -> dopamine
Through drugs, we generally intervene on levodopa levels, while with food we can help increase tyrosine or phenylalanine, amino acids that are able to stimulate dopamine synthesis.

Dopamine in nutrition –
Dopamine cannot be directly increased through food, since, if introduced with food, it would remain in the bloodstream, causing nausea and vomiting, but would not be able to reach the central nervous system.
However, with food we can indirectly stimulate the production of dopamine, increasing the levels of phenylalanine and tyrosine, its important precursors, able to promote its synthesis in the nervous system.
Phenylalanine and tyrosine are amino acids derived from the digestion of food proteins. They are formed in the plasma, but are able to cross the blood brain barrier, making themselves available to the dopaminergic neurons located in the central nervous system.
Foods with high phenylalanine content:
– wheat germ;
– legumes;
– meat;
– egg;
– fish:
Among the foods particularly rich in tyrosine, we remember instead:
– dried fruit (almonds, walnuts);
– bananas;
– avocado;
– oil seeds (sesame, pumpkin, sunflower seeds);
– dairy product;
– cocoa;
– turmeric.
Since dopamine is a substance that tends to oxidize easily, to obviate the production of free radicals produced, it is advisable to take fresh seasonal fruit and green leafy vegetables, rich in antioxidants and vitamins of the C and E complex. In particular, to counteract the presence of free radicals, it is recommended to take the following foods:
– apples;
– beets;
– green leafy vegetables;
– orange fruits and vegetables (oranges, squash, carrots);
– asparagus;
– broccoli, cauliflower, Brussels sprouts;
– peppers;
– strawberries.