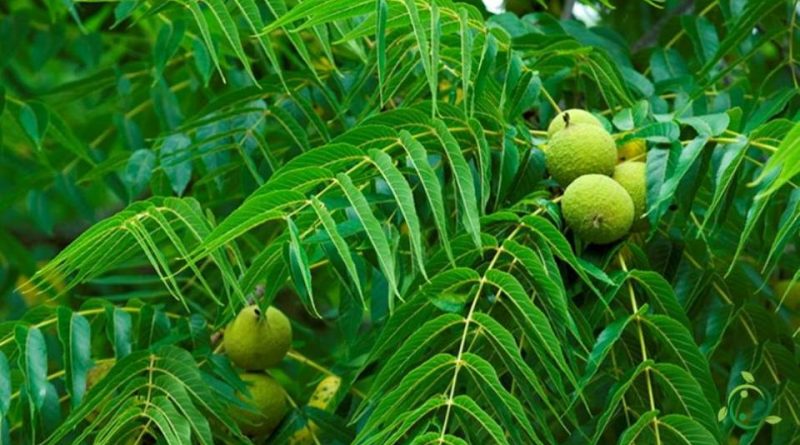 The Eastern American black walnut (Juglans nigra L., 1753) is a fruit tree of the Juglandaceae family, native to the eastern North American continent, from which it was introduced in Europe around 1630 and widely used in parks and gardens, as well as having been experienced as a forest essence, as in Germany.
The plant is widespread in North America and in the eastern United States it forms mixed forests, from the plains to the lower mountainous belt.
It is a monoecious plant with unisexual flowers: the male ones are gathered in pendulous axillary catkins, provided with bracts and numerous stamens; the female ones are terminal and gathered in groups of 1-3.
The fruits are roundish drupes solitary or in pairs; the husk of the drupe has a wrinkled surface and contains a blackish, very woody and wrinkled round nut that contains a seed with a strong and unpleasant taste.

Cultivation –
The Eastern American black walnut is a plant characterized by a fairly rapid growth; in the areas of origin it exceeds 40 m in height, while in Italy it can reach a maximum of 20 – 25 m.
This tree can be grown for its edible fruit; as a rule, it reaches its maximum productivity around 30 years of age and continues to produce walnuts for about 100 years.
Propagation occurs by seed, in the autumn-winter period; usually spontaneously following the fall of the fruit due to atmospheric agents or the action of animals.
From a pedological point of view, it prefers neutral, humid and above all well-drained soils. Even better if it is fertile soils, while it grows more slowly in arid soils, in which it still manages to survive.
For its cultivation, it should be borne in mind that the ideal climate is typical of North America, with cold winters, hot summers, mild springs and autumns. It also prefers sheltered locations.
The plant, except in the first years after planting, does not need irrigation or fertilization.
Furthermore, pruning is not necessary if it is cultivated for ornamental purposes, while if the goal is to produce wood, it is necessary to intervene, annually removing the damaged branches, those withered inside and always giving a balanced shape to the plant.
It should be remembered that for its cultivation the black walnut produces juglone with the roots, which due to allelopathy, is toxic to other species of plants and does not allow them to grow near the walnut tree.

Uses –
The wood of Juglans nigra, although less valuable, has the same characteristics as the European walnut, but the plant has a faster growth.
In various cities of central Europe it is widely used for road trees and for parks and gardens.
The wood has a specific weight of about -700 kg / m3, white sapwood tending to yellow, chocolate-colored heartwood, sometimes characterized by purple streaks. Very marked differentiation between sapwood and heartwood. Open and diffuse pore, characteristic of the Juglans genus.
It has a high stability, if the wood is treated with the vaporization process, medium-high hardness, high durability for the heartwood, poor for the sapwood, very good workability. Odorless.
The crust phenomenon that characterizes dried but not evaporated wood is typical. The dark color allows it to be combined with Juglans regia wood (European walnut), after appropriate bleaching with bleaching agents, such as hydrogen peroxide.