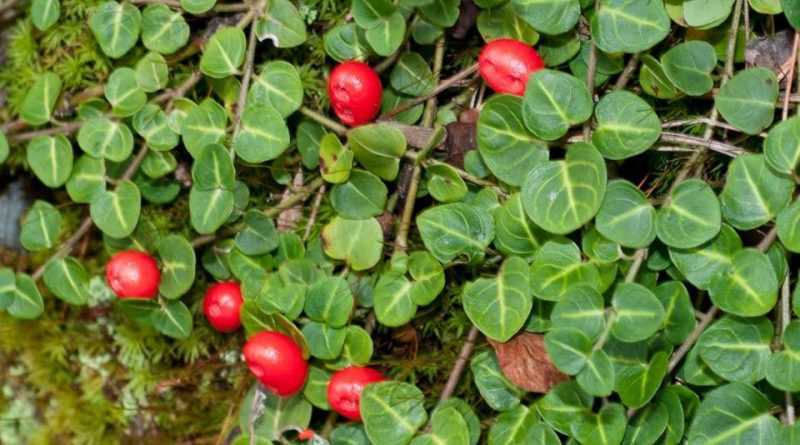 Etymology –
The term Mitchella of the genus was dedicated by Linnaeus to the American physician and botanist John Mitchell (1711-1768).
The specific epithet repens is the participle of répo crawl: creeping.

Geographic Distribution and Habitat –
Mitchella repens is a plant found in North America especially throughout eastern North America, from southeastern Canada in the south to Florida and Texas and Guatemala.
Its habitat is that of dry or humid woods, along the banks of streams and on sandy slopes. 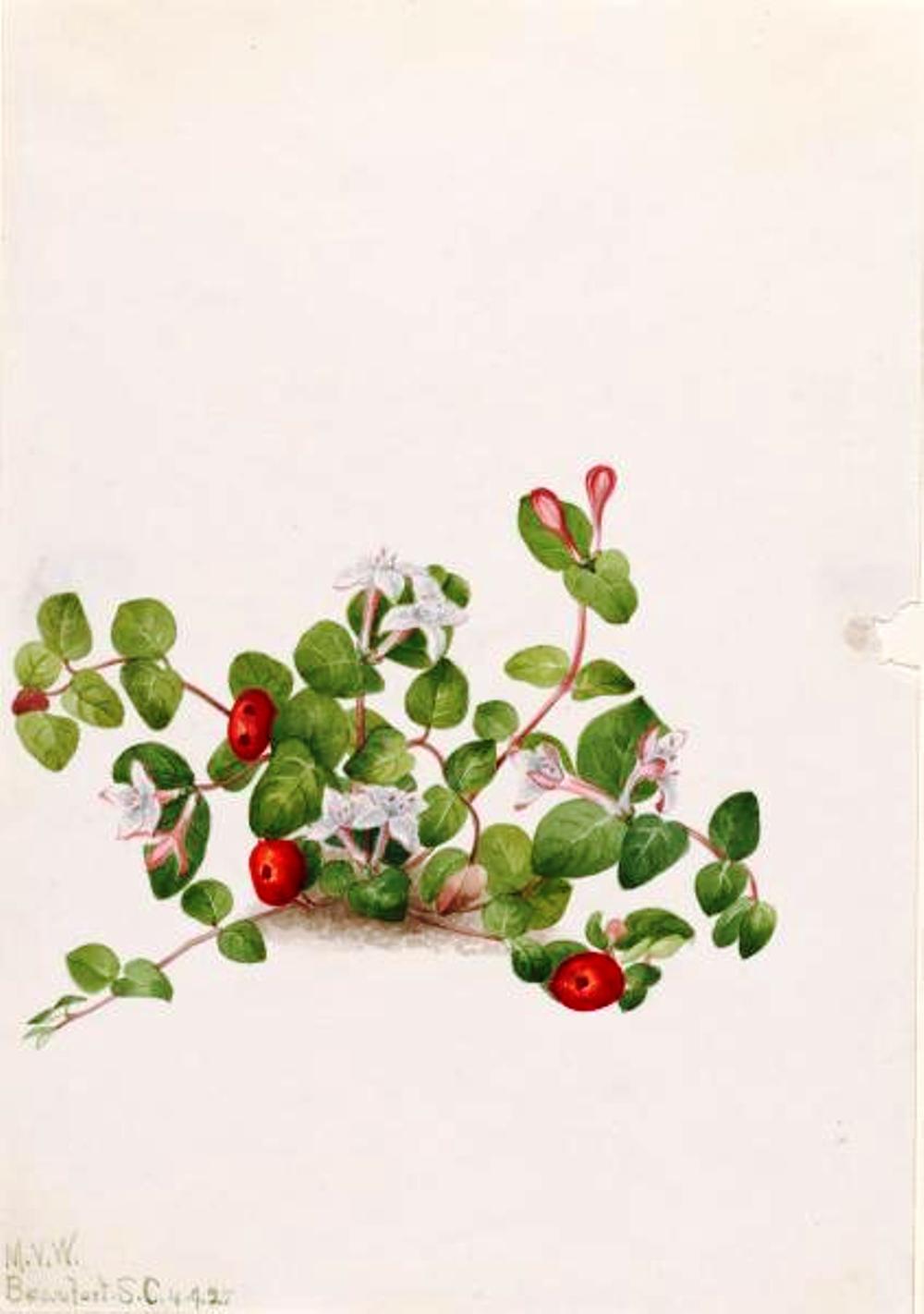 Description –
Mitchella repens is an evergreen plant that grows as a non-climbing vine, no more than 6cm tall with 15 to 30cm long creeping stems.
The leaves are evergreen, dark green and shiny and are ovate to cordate in shape. The leaves have a pale yellow midrib. They have short petioles and the leaves are paired opposite on the stems.
Adventitious roots can grow at nodes and rooting stems can branch and root repeatedly, producing expanded mats.
The flowers are small, axillary, trumpet-shaped, and are produced in pairs, and each pair of flowers is born from a common calyx that is covered with fine hair. Each flower has four white petals, a pistil and four stamens.
The plants have a bimorphism and may have flowers with long pistils and short stamens (long-styled flowers), or have short pistils and long stamens (short-styled flowers).
The two morphisms are genetically determined, so pollen from one form does not fertilize the other form, resulting in a form of heteromorphic self-incompatibility.
The twin flower ovaries blend together, so that there are two flowers for each berry. The two bright red spots on each berry are vestiges of this process.
The fruit, which has a diameter of about 8 mm, ripens between July and October and can persist through the winter. The fruit is a drupe containing up to eight seeds.

Cultivation –
Mitchella repens is a plant that is harvested in nature for local use as a food and medicine. However, it is sometimes grown as an ornamental, where it can be used as a ground cover.
This plant requires moist but well-drained soil free of limestone and some shade to grow and prefers peaty but not clayey soil.
It grows on both neutral and acid soils and is resistant down to at least -20 ° C.
It is a climbing plant, whose stems form new roots at the nodes.
Propagation can take place by seed but common reproduction is vegetative, with plants forming extensive colonies. In fact it is rarely propagated by seeds, but the cuttings are easy to make.

Customs and Traditions –
Mitchella repens is one of the many species described for the first time by Carlo Linneo. In the Mohawk language his name is Noon kie oo nah yeah.
This plant as well as in the wild is cultivated for its ornamental red berries and bright green foliage. It is grown as a plant to create ground cover in shady places.
The plants have been extensively harvested for Christmas decorations, and over-harvesting has negatively impacted some local populations.
The dried leaves have a freshly mown hay scent and the flowers have a pleasant sweet fragrance.
This plant has both food and medicinal uses.
The fruits can be eaten raw and are slightly aromatic but almost tasteless, reminiscent of cranberries, and with many seeds.
A tea is made from the leaves. For medicinal use it was once used by several Indian tribes in North America to speed up childbirth. However, this tea should not be used during the first six months of labor, as it can induce a miscarriage.
Tea is also used to treat delayed, painful or irregular menstruation.
The tea was also used externally as a cleanser for hives, swelling, sore nipples, rheumatism, etc.
A tea made from berries has a very definite sedative effect on the nervous system.
It was also occasionally used to treat a variety of other ailments, including insomnia, rheumatic pain, and fluid retention.
The plant is still used in modern herbal medicine as an adjuvant in childbirth and is also believed to have a tonic effect on the uterus and ovaries.
The herb is astringent, diuretic, hypnotic and tonic.
Among other uses we remember those agroforestry as it can be used as a ground cover plant in a shady position. The plants form an extended carpet, rooting along the stems.
Furthermore, the fruits, which are never abundant, can be part of the diets of different birds, such as the capercaillie, the northern bobwhite and the wild turkey. They are also consumed by foxes, white-footed mice, and skunks.
The foliage is occasionally consumed by the white-tailed deer.

Preparation Method –
Mitchella repens is a plant that has various uses, from ornamental to forest or for food or medicinal uses.
The fruits can be eaten raw, while the leaves are harvested in the summer and dried for later use.
From these you can prepare a tea that is used for different purposes.