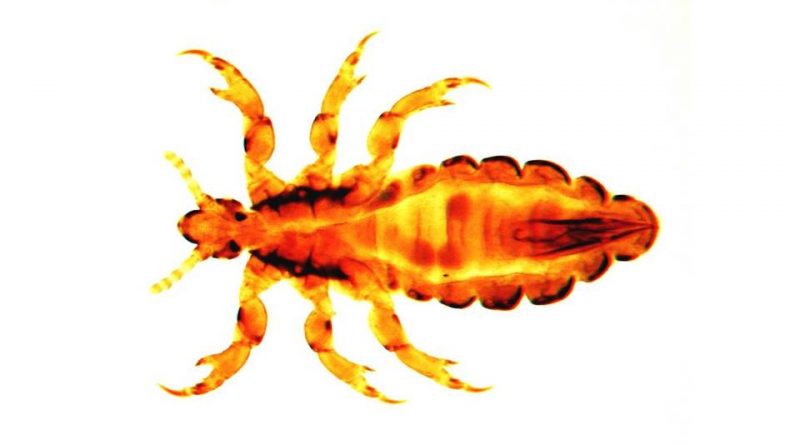 The head louse (Pediculus humanus capitis De Geer, 1778) is an insect belonging to the Pediculidae family.

Geographic Distribution and Habitat –
The head louse is an insect that lives in human hair, developing mainly on the nape and on the area above the ears, where it carries out its entire life cycle.
This louse is an obligate permanent and strictly host-specific ectoparasite: that is, it carries out the entire life cycle on the human scalp. Lice can therefore only live in contact with the human body (they cannot infect animals). They leave a head only when forced to move to a new host: this happens, for example, in case of a high and prolonged fever or after the death of the host.

Morphology –
Adult lice are small (2.5-3 mm long), flattened back ventrally and wingless.
The thoracic segments are fused, but otherwise distinct from the head and abdomen, the latter consisting of seven visible segments.
They are generally gray in color, but their precise color varies depending on the environment in which they were raised.
After feeding, the consumed blood causes the louse’s body to take on a reddish color.
On the insect’s head there are a pair of antennae, each with five segments.
Head lice have a pair of eyes that are present in all species within the Pediculidae family, but are reduced or absent in most other members of the Anoplura suborder.
Like other members of the Anoplura, the mouthparts of the head louse are well suited for piercing the skin and sucking blood.
These mouth parts are retracted into the insect’s head except during feeding.
From the fused segments of the thorax there are six protruding legs which are short and end with a single claw and opposite “thumb”.
Between the claw and thumb, the louse grabs its host’s fur.
With their short legs and large claws, lice are well adapted to clinging to their host’s hair. These adaptations make them unable to jump or even walk efficiently on flat surfaces. Head lice can climb into strands of hair very quickly, allowing them to move quickly and reach another host.
In addition, seven segments are visible in the abdomen, of which the first six each have a pair of spiracles through which the insect breathes; the last segment contains the anus and (separately) the genitals.
There are differences between the two sexes.
In male lice, the two front legs are slightly larger than the other four. This specialized pair of legs are used to restrain the female during mating. Males are slightly smaller than females and are characterized by a pointed end of the abdomen and a well-developed genital system visible within the abdomen. Females are characterized by two W-shaped gonopods at the end of the abdomen.
The eggs are oval in shape and about 0.8 mm long. They are bright, transparent and light brown in color as long as they contain an embryo, but appear white after hatching.

Attitude and Life Cycle –
The life cycle of the head louse consists of three stages:
The female lays the eggs, individually on the hair, attaching them to them by means of saliva which contains compounds based on keratin, therefore the eggs are resistant to both water and brushes, but not to dilute and hot acetic acid. After 7/10 days the nits hatch.
Like most insects, lice are oviparous. Females lay about three to four eggs per day. Louse eggs (also mistakenly called nits) are attached near the base of the host’s hair bulb.
Eggs are usually laid at the base of the hair, i.e. 3-5 mm of the surface of the scalp.
In warm climates, and especially in the tropics, eggs can be laid 15 cm or longer along the hair shaft.
To attack an egg, the adult female, as mentioned above, secretes a sticky substance from her reproductive organ. This glue quickly hardens into a sheath that covers the hair and much of the egg with the exception of the operculum, a hood through which the embryo breathes.
Lice hatch from eggs typically six to nine days after oviposition.
After hatching, the louse nymph leaves its egg shell still attached to the hair shaft. The empty eggshell stays in place until it is physically removed by the abrasion or host, or until it slowly disintegrates, which can take 6 or more months.

Ecological Role –
The head louse is an insect that, together with other species, carries out its cycle on the human body.
Other lice species that live on the human body include the body or clothing louse (Pediculus humanus corporis L.) and the pubic lice (Phthirus pubis L.). In addition to causing irritation, the human louse can transmit various diseases such as exanthematous Typhus, caused by a Rickettsia.
Man can therefore be parasitized by Pediculus humanus capitis (pediculosis of the head), Pediculus humanus corporis (pediculosis of the body) and Pthirus pubis (pediculosis of the pubis).
Over time, the body louse has evolved from the head louse: the two subspecies of P. humanus (capitis and corporis) are indistinguishable from each other and, raised in the laboratory, mate without problems, giving fertile and inter-fertile offspring.
Pthirus pubis preferentially infests the pubis, but also other sites such as armpits, eyelashes and eyebrows.
The lice that parasitize humans today may have evolved from Homo erectus parasites.
It is believed that six million years ago the ancestors of humans were entirely covered in hair and a single species of lice moved freely from head to toe. The louse belonging to the genus Pediculus, divided into two species: the human lice, known with the scientific name of Pediculus humanus, and those of the chimpanzee as Pediculus schaeffi. When humans lost their body hair about 1.8 million years ago, the lice found themselves confined to the head, leaving the rest of the body. Later, possibly due to the Ice Age, men began to wear clothes regularly, allowing the body to develop pediculosis.
Today more lice afflict many populations especially where sanitary conditions are poorer.
The safest way to prevent lice infestation is to observe the state of the scalp daily, if nits are found, they must be removed immediately. This operation can be done manually or with the help of a thick comb soaked in hot vinegar. The vinegar thanks to the acid pH dissolves the adhesive substance that fixes the nits to the hair.
However, in the case of lice infestations, it is good to apply a shampoo or antiparasitic powders. It is useless to repeat the application before a week.
If a family member has pediculosis it is advisable to check everyone’s head. When a child is hit, the school must be notified immediately, so that other classmates are also monitored.