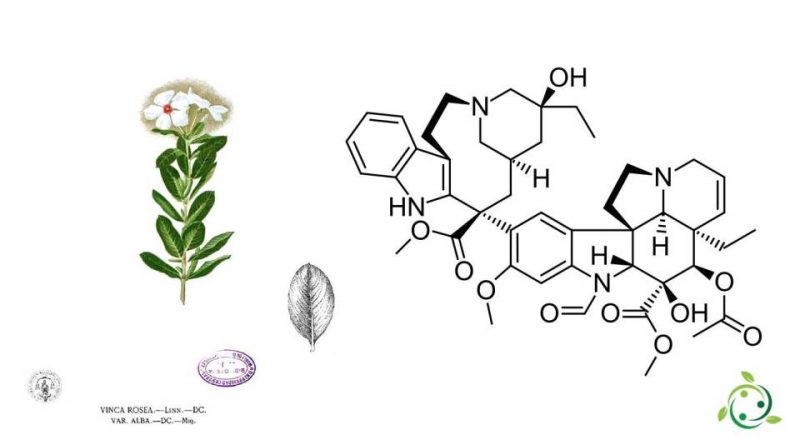 Vincristine is a monoterpene indole alkaloid with a very complex chemical structure and with a brute or molecular formula: C46H56N4O10.
This substance also called leurocristine or vincaleucoblastine, together with its methylated congener on nitrogen in position 1 of the indole nucleus called vinblastine and other congeneric alkaloids called cataranthine and vindoline, are present in nature in a species of periwinkle (Catharanthus roseus (L.) G. Don).
Vincristine is a substance that can be synthesized by a complex process and is an antineoplastic drug.
It is used to treat a variety of cancers including acute lymphocytic leukemia, Hodgkin’s lymphoma, non-Hodgkin’s lymphoma, small cell lung cancer, rhabdomyosarcoma, Ewing’s sarcoma, cancer of the adrenal medulla, primary neuroectodermal tumor, Wilms tumor (a type of kidney cancer), breast cancer that has spread to other parts of the body, multiple myeloma, retin other oblastoma. Vincristine can be given alone or in combination with other anticancer agents.
Vinca alkaloids, as the drugs belonging to this class are defined, work by blocking the formation of a structure essential for cell division, the mitotic spindle. In the absence of a functioning mitotic spindle, the chromosomes fragment and the cell dies as a result of the alteration produced.
Vincristine’s anticancer properties derive from its ability to inhibit cell division at the early stages of the mitosis process. Vincristine binds to tubulin monomers, preventing the formation of microtubules of the mitotic spindle fibers during the cell replication process. By binding to the constituent elements of microtubules, vincristine disables cellular mechanisms capable of aligning and moving chromosomes within the parent cell. Vincristine blocks the separation of chromosomes that have duplicated and prevents cell division for this reason it finds wide application as an antineoplastic drug. Although vincristine works by preventing cancer cells from dividing, it does not selectively inhibit the division of cancer cells.

Side effects –
The use of vincristine can lead to marked side effects due to the fact that, in addition to inhibiting the duplication of cancer cells, it also blocks the replication of healthy cells, especially at the level of hematopoietic tissues. This can lead to deficiency of blood corpuscle elements such as anemia and reduced immune response by blocking the lymphoid and myeloid precursors of the immune system cells. Vincristine, compared to the other Vinca alkaloids, demonstrates a particular toxic activity at the level of the central and peripheral nervous system and only to a lesser extent at the level of the bone marrow and the digestive and skin systems. Toxicity is manifested by the appearance of paraesthesia, decreased reflexes and sensitivity to the peripheral nerves, disorders of the autonomic nervous system (for example, constipation, which can even reach paralytic ileus), as well as minor manifestations.