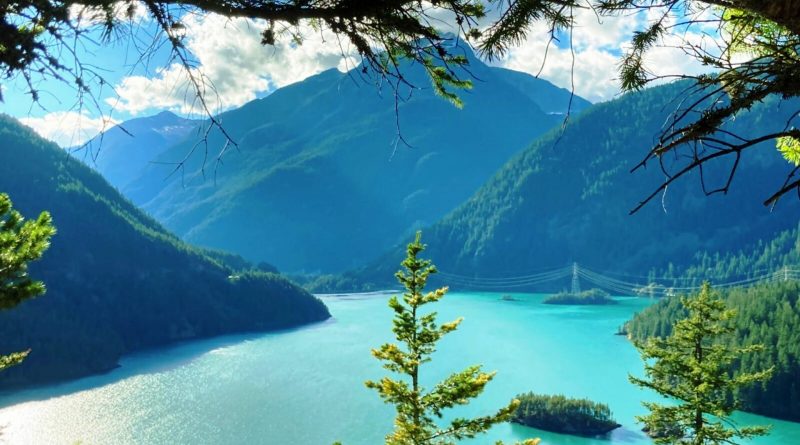 North Cascades National Park, whose WDPA code is: 979 is a United States National Park located in Washington state.
This park has a land area of ​​2,042.78 km², was established in 1968 and is managed by the National Park Service.
North Cascades National Park consists of a northern and southern section, divided in two by the Skagit River which flows through the Ross Lake National Recreation Area’s reservoirs. Lake Chelan National Recreation Area is located on the southern boundary of the park’s southern unit. In addition to the two national recreation areas, other protected lands including several national forests and wilderness areas as well as Canadian provincial parks in British Columbia almost surround the park.
North Cascades National Park features the rugged mountain peaks of the North Cascades Range, the largest glacial system in the contiguous United States, the headwaters of numerous waterways and vast forests with the highest degree of flora biodiversity of any park American national team.
This region was initially colonized by Paleo-Indian Native Americans; when the European American explorers arrived, it was inhabited by the Skagit tribes. In the early 19th century, the region was visited by fur hunters, and several British and American companies vied for control of the fur trade. After the Canada-United States border was set at the 49th parallel in 1846, explorers came to plot potential routes through the mountains for roads and railways. Limited mining and logging occurred from the late 19th century to the early 20th century. The first significant human impact in the region occurred in the 1920s, when several dams were built in the Skagit River Valley to generate hydroelectricity. Environmentalists then campaigned to preserve the remaining wilderness, which culminated on October 2, 1968, with the designation of the North Cascades National Park.
The visit to this park is limited in winter by heavy snowfall and a high risk of avalanches due to the steep terrain, especially on the western slopes.
Most access to the park is from State Route 20, which follows the Skagit River, although this road is closed for a few months in the winter. Most of the plant and animal species native to the park region are still found there, although climate change and pollutants from the industrialized regions to the west pose risks to the environment. The park has one of the oldest and most enduring research programs dedicated to studying climate change, primarily through examining the effects of glacier retreat.
North Cascades National Park is almost entirely protected as wilderness, so the park has few facilities, roads, or other improvements. Visitors wishing to go to a campsite must do so in the adjacent national forests or national recreation areas. Camping within the park requires hiking, horseback, or boating, and camping is regulated by a permit system to ensure that the wilderness is not over-exploited. Mountaineering is popular in the park and only clean and discreet climbing is allowed.
Within the North Cascades National Park there are sensitive archaeological resources. Investigations are conducted to inventory archaeological sites prior to any undertaking. Currently, 260 prehistoric sites have been identified, some dating back more than 8,500 years. As a result of these studies, it is now widely recognized that the expansive subalpine landscape of the North Cascades National Park has made an important contribution to the Northwest Coast Indian economies. Historic archaeological sites include mines and mining fields, firefighters, sheep herding fields, sawmills, farms and a “lost” hotel.

Geography –
North Cascades National Park is located in portions of Whatcom, Skagit, and Chelan counties in the US state of Washington. Divided in two by the Ross Lake National Recreation Area (NRA), the park is made up of two districts; the north and the south. The northern border of the northern district is also the international border between the United States and Canada; the latter manages adjacent Chilliwack Lake and Skagit Valley Provincial Park. The entire eastern and southern boundary of the northern district is bordered by Ross Lake NRA. The western side of the northern district is bordered by the Mount Baker-Snoqualmie National Forest, within which are the wilds of Mount Baker and Noisy-Diobsud, both bordering the park. Mount Baker-Snoqualmie National Forest also borders part of the park’s southern district to the southwest. Along the southwestern border is the Wenatchee National Forest, within which lies the Glacier Peak Wilderness.
The park’s southern boundary is shared with the Lake Chelan NRA, and a small section of the eastern boundary is shared with the Okanogan National Forest. Lake Chelan-Sawtooth Wilderness is found in the Wenatchee and Okanogan National Forests along the park’s southeastern boundary.
North Cascades National Park has nearly 2,700m of vertical relief, with the park’s highest point atop Goode Mountain and the western valleys located just 120m above mean sea level, the park has an ecosystem, which includes eight life zones.
The erosion of water and glacial ice has created some of the steepest mountain ranges in the contiguous United States, which rise between 1,200 and 1,800 m above their bases.The park is home to over 300 glaciers and 300 lakes and contains the springs of some streams that flow into the Skagit River, as well as the Stehekin and Nooksack Rivers. The harshness of the terrain was an obstacle to human invasion and, as a result, the park is almost entirely wild. 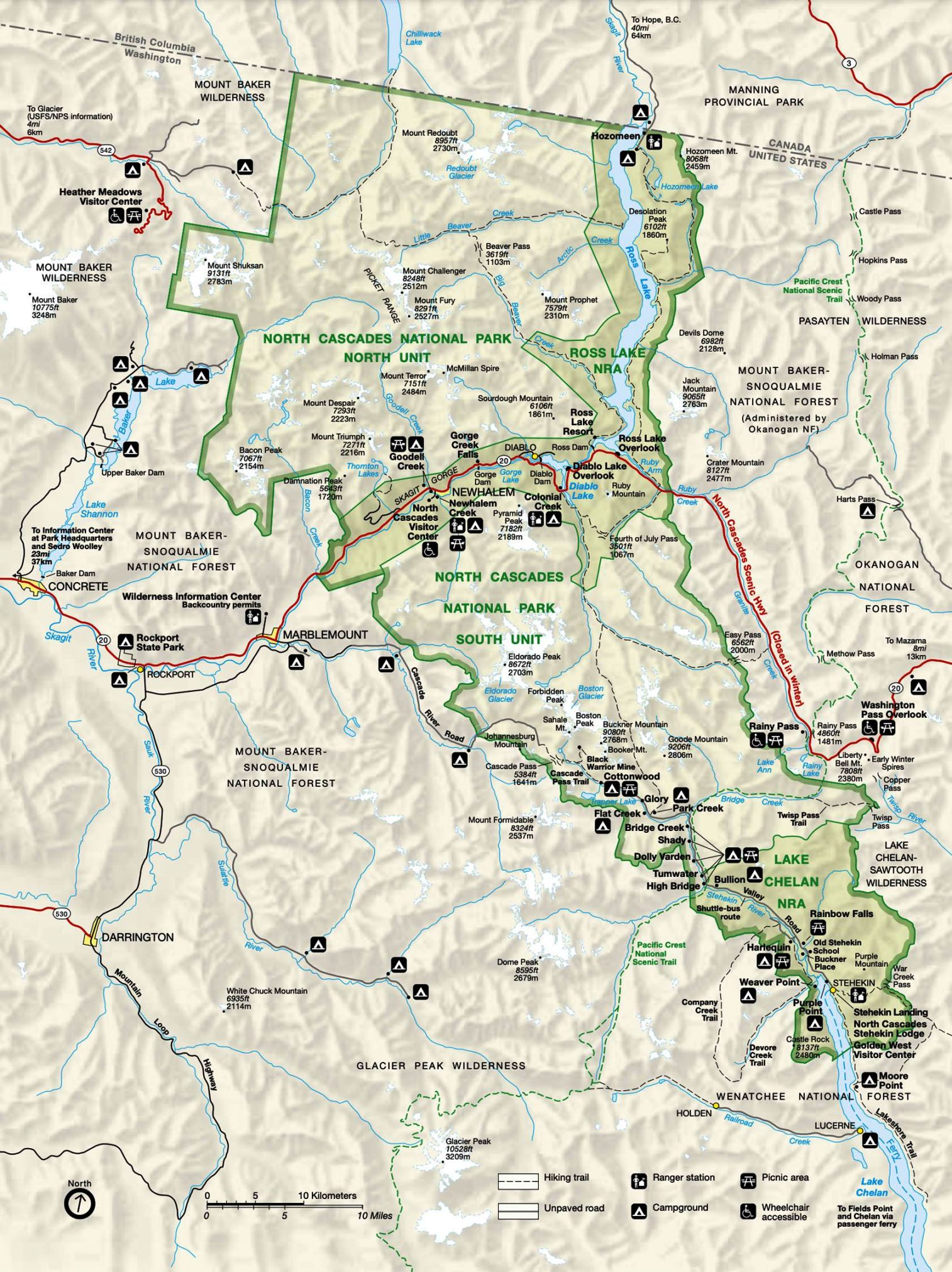 Geology –
North Cascades National Park gets its name from the North Cascades Mountains, which are a subsection of the Cascade Range that stretches from Northern California to British Columbia. The North Cascades are the northernmost section of the mountain range, and unlike their southern counterparts which consist of volcanic rocks from the Tertiary to the Holocene, the North Cascades are composed primarily of crystalline and metamorphic rocks from the Mesozoic. Although most of the rocks in the park are from the more recent Mesozoic, the oldest rocks are 400 million years old, dating back to the Devonian. A complex assemblage of various rock formations has been repeatedly eroded, buried, subjected to fracturing and heat, creating a geological puzzle that is one of the most complicated and least understood geological records in North America. These forces are underway and the region continues to see uprisings and faults.
Evidence from fossils and magnetism found in the rocks indicates that the soils that make up the North Falls moved thousands of miles north until they hit the North American plate 90 million years ago. The collision between the rocks caused fracturing and folding, as well as uplift and the soils were further fractured into north or south-facing faults. The raised rocks have mostly eroded; 40 million years ago the heavier basalt rocks of the ocean floor began to push up the lighter granite rocks that are the core of the mountains, a process that continues. Subjected to intense heat, the rocks deep underground near the collision zone recrystallized into granite rocks, which form the backbone of the highest peaks. The continued uplift and erosion and eventually the action of glacial ice on the landscape during the Holocene exposed the rocks that are visible today.
Much tougher and more resilient than the younger volcanic rocks of the Southern Falls, the Northern Falls are accordingly more rugged, with steep terrain as the norm due to severe water and ice erosion. The continuous rise in conjunction with the erosion of water and ice has created deep valleys and significant vertical reliefs comparable to much higher mountain ranges.

Flora –
Among the national park areas of North America, the North Cascades are nearly unsurpassed in their botanical diversity. Extreme variation in rock and soil types, exposure, slope, elevation and rainfall create many different habitats within a relatively small area. About 1,630 species of vascular plants have been identified in the eight different life zones of the park.
Plant life in North Cascades National Park is extremely diverse, reflecting differences in rock and soil types, exposure, slope, elevation, and rainfall. Eight distinctive life zones support thousands of different plant species in the large ecosystem of North Cascades National Park. No other National Park in the United States surpasses North Cascades National Park in the number of plant species recorded. More than 1,627 vascular plant species have been identified, and estimates of non-vascular and fungal species could more than double this number for total plant species in the North Cascades. Some of these plants are threatened or endangered, and changes such as air pollution and global warming could affect their survival. Other threats include invasive non-native plants which are referred to as exotic species. Exotic species are capable of replacing native species and modifying biotic communities. North Cascades National Park resource managers are taking steps to reduce this threat by removing these invasive plants. This can be particularly difficult as these plants use trails, waterways, wind, and roads to colonize the area. Restoring human-modified habitats has been a priority since the park was established in 1968. As a leader in developing revegetation methods in North Cascades National Park, the plant propagation crew has cultivated thousands of native plants from seeds and cuttings. Taken from areas adjacent to damaged sites, these seeds and cuttings are later returned as young plants to restore the park’s campgrounds and trampled areas.

Fauna –
The North Falls are one of the most diverse ecosystems on earth. Animals with fins, fur, feathers and scales are all at ease in this dramatic and beautiful setting. Elusive mammals like the gray wolf, fisherman, and wolverine roam the wilderness in small numbers, while Columbia’s more adaptable black-tailed deer, Douglas squirrels, and pikas delight park visitors in abundance. A wide variety of birds breed within the park boundaries, including rare animals such as the bald eagle, osprey, harlequin duck, and a variety of neotropical migrants. Fish and amphibians nestle in clear mountain lakes and streams. Rich forests, rocky slopes, and clean waters teem with invertebrate life, such as butterflies, dragonflies, stone flies, and mayflies. Every creature, regardless of its size, plays an intricate role in North Falls, be it a grizzly bear or a banana slug. North Cascades National Park is home to approximately 75 mammal species in 20 families; about 21 species of reptiles and amphibians representing at least four orders; about 200 bird species in 38 families; at least 28 species of fish; and recent investigations have documented over 500 types of terrestrial insects and about 250 species of aquatic invertebrates.