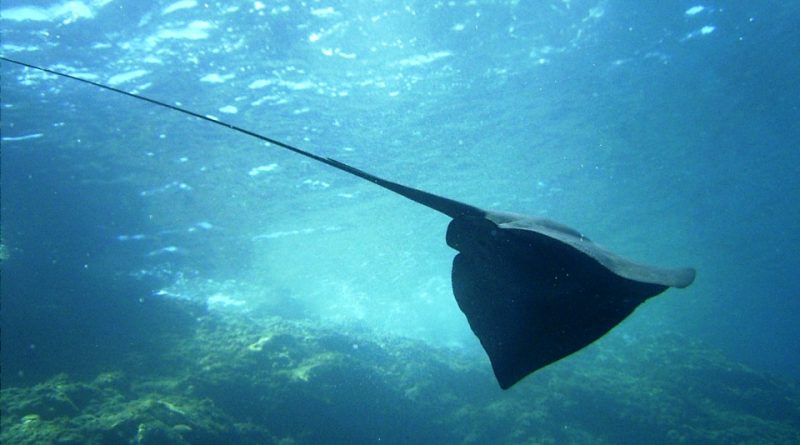 The common eagle ray (Myliobatis aquila Linnaeus, 1758) is a cartilaginous fish belonging to the Myliobatidae family.

Geographic Distribution and Habitat –
The common eagle ray is a fish found in the eastern Atlantic Ocean from the UK south to South Africa, including the North Sea and the Mediterranean Sea. It is also found in the Indian Ocean, from Kenya to South Africa. It lives both near the coast and further away, at depths of up to about 800m but spends most of its time in very shallow water less than 50m.
In addition to being present in the Mediterranean, it is also common in the Adriatic and less common in the Tyrrhenian Sea.
Its habitat is often coastal and sometimes oceanic of tropical and temperate waters, which lives from a few meters to 300 m of depth, often swimming in mid-water or near the surface, preferably on the sandy bottoms of bays and estuaries. 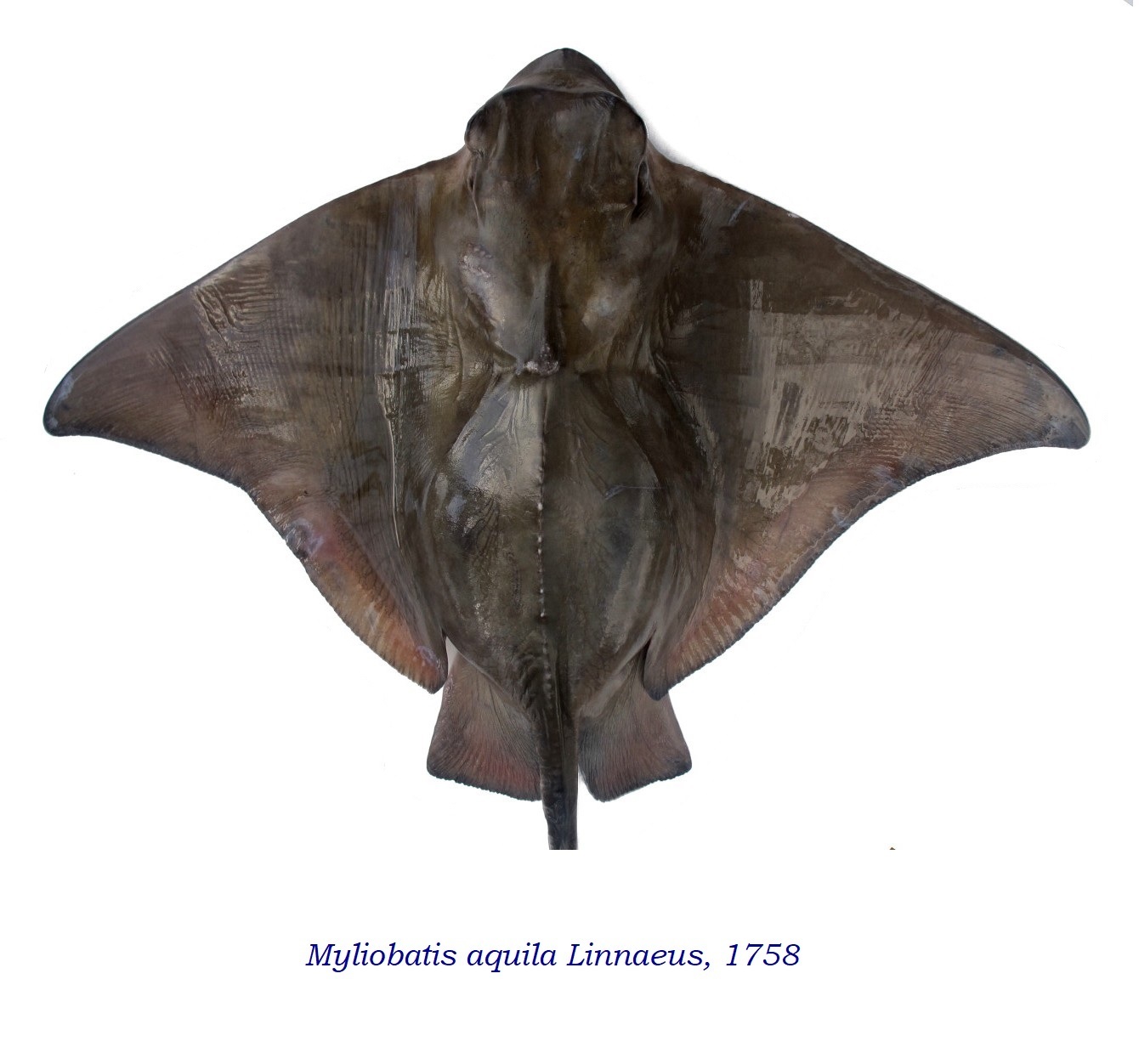 Description –
The Myliobatis aquila is recognized by the body with the classic discoid shape, with the horizontal diameter wider than the vertical one; measures up to 1.5m wide and 2.5m long.
The head, raised above the back, protrudes with the muzzle, which has a semicircular front edge. The eyes are in a lateral position and are followed by the spiracles. The tail, more than twice as long as the disc, is whip-like and has a spine on its dorsal side. The skin is smooth and covered with slippery mucus. The nasal openings are ventral and connected to the mouth by two lateral grooves. In the jaws there are dental plates formed by flattened polygonal teeth and arranged in 7 series.
The cephalus-pectoral fins form a disk almost double the height and have pointed apexes; the anterior margins are convex and the posterior ones are concave, so as to make the fins assume the appearance of falcate wings. The pelvic fins are quadrangular with a straight posterior margin. There is only one dorsal fin which is rounded and inserted on the tail, behind the apexes of the ventral ones and just before the sting, which is robust and with serrated margins. The anal and caudal fins are absent.
This fish has a dark ash brown color, with greenish or dirty bronze reflections.
It has a whitish belly, with the outer edge of the pectoral and pelvic muscles darker or reddish brown.
The tail is black and the caudal sting is equipped with a toxic liquid contained in a special venom gland.

Biology –
The common eagle ray is an ovoviviparous species which, after a gestation of 6 to 8 months, gives birth, in the autumn-winter period, from three to seven embryos at a time.
The young develop inside the mother, receiving nourishment first from the egg yolks, but later from the fluids secreted by the mother in her uterus.
The embryos at birth already have the appearance of adults.
The time of a generation is 5 years.

Ecological Role –
The Myliobatis aquila is a fish that feeds on gastropods and lamellibranchs and also on large crustaceans, crabs and hermit crabs; often it helps with the flapping of the pectorals to capture the prey.
Instead of having pointed teeth, it has flattened hexagonal bars and mosaic-like plates on the jaws; with these it crushes the shells of its prey.
The taxonomic position of Myliobatis aquila is unclear as the populations in the Mediterranean Sea may be a different species from those in the south-east Atlantic. In the Gulf of Lion, the northwestern Mediterranean Sea and other areas, populations have declined since the 1970s.
The fish is threatened by intensive fishing. Along the West African coast it is also subject to artisanal fishing activities but these are less intense and populations can be stable.
It is fished with trawl or gill nets and with bottom longlines. Its meat is soft and viscous and is marketed and consumed fresh only locally.
The little information available shows a trend with strong fluctuations with apparent decline. This is due to both lifestyle and type of sampling. In fact, this species lives in areas with little trawling (Relini et al. 2010, Mannini & Relini 2012).
The main threats are associated with the fact that it is caught as a bycatch from both commercial and artisanal fishing. Sensitive to various fishing gear, such as bottom trawls, gillnets and longlines.
The IUCN classified it as “critically endangered”.