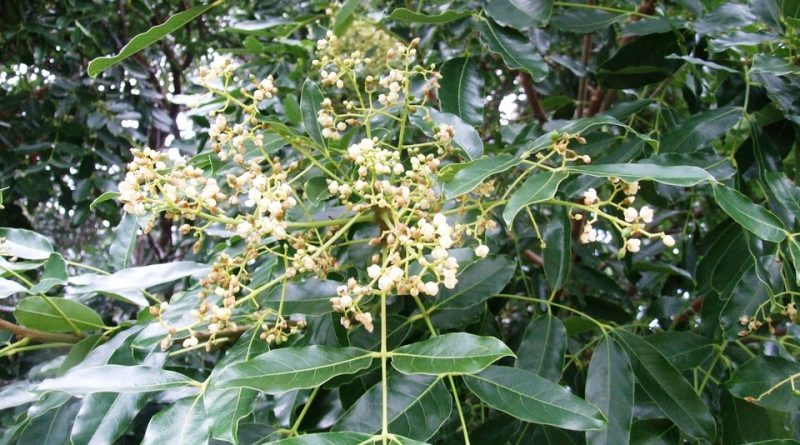 African mahogany or dry zone mahogany (Khaya senegalensis (Desr.) A. Juss.) is an arboreal species belonging to the Meliaceae family.

Etymology –
The term Khaya comes from the vernacular language for the Wolof language of Senegal used for this plant.
The specific epithet senegalensis comes from Senegal, a West African nation overlooking the Atlantic Ocean.

Geographic Distribution and Habitat –
Khaya senegalensis is a plant that grows in the tropical regions of West Africa; the tree is native to an area that includes: Benin, Burkina Faso, Cameroon, Central African Republic, Chad, Ivory Coast, Gabon, Gambia, Ghana, Guinea, Guinea-Bissau, Mali, Niger, Nigeria, Senegal, Sierra Leone , Sudan, Togo and Uganda.
Its natural habitat is that of riparian forests and the wettest savannah woods; in humid regions it is found on higher soils and at altitudes of up to 1,800 meters. By its first year, the seedling develops a deep root system making it the most drought tolerant member of its kind. 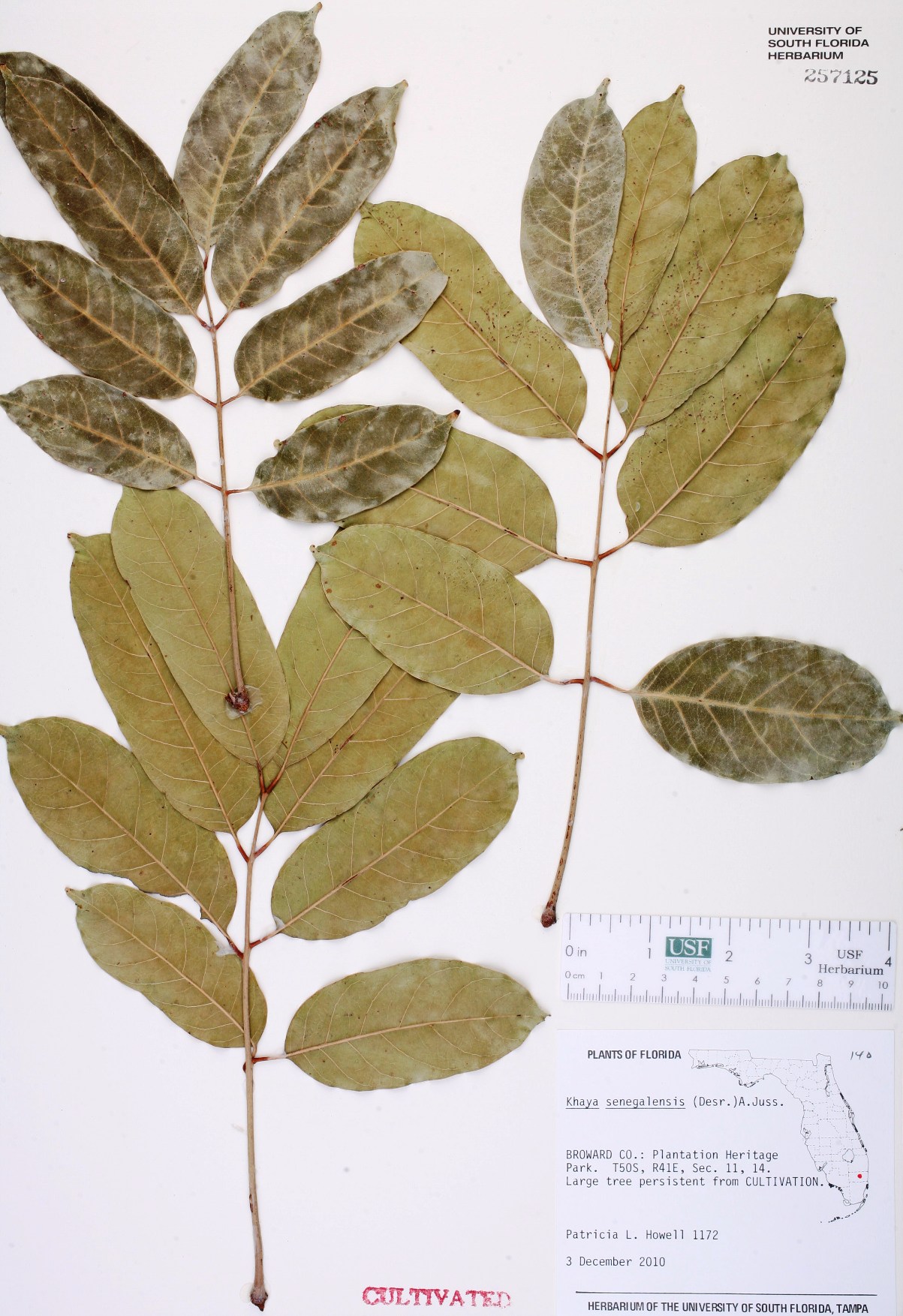 Description –
The African mahogany is a fast-growing medium-sized tree that can reach a height of up to 15-30 m in height and 1 m in diameter and with a rounded crown. It is a usually evergreen tree that can be deciduous in drier climates.
The bark ranges from dark gray to gray-brown while the heartwood is brown with a pink-red pigment made up of interlocking coarse grains.
The tree is characterized by leaves arranged in a spiral formation grouped at the ends of the branches.
The flowers are white and fragrant.
When ripe, the fruit turns from gray to black.

Cultivation –
Khaya senegalensis is a plant of the humid tropics, where it is found at altitudes of up to 1,800 meters. It grows best in areas where annual daytime temperatures are between 29 and 38 ° C, but can tolerate 13 – 42 ° C. this tree prefers an average annual rainfall in the range 800 – 1,300 mm, but tolerates 650 – 1,500 mm.
It grows spontaneously in areas with a dry season of 4 – 7 months and the plants are moderately shade tolerant, especially when young, although older trees prefer sunny locations.
It grows best in deep, fertile and moist soil; it is very resistant to flooding, the tree can be considered for planting on marshy soils and prefers a pH in the range of 5 – 6, tolerating 4.5 – 7.5.
The now established plants are very resistant to drought and the young trees have a rapid growth rate.
During the first year, the seedling develops a strong and deep taproot, making it the most drought tolerant of all members of this genus.
If not used for deforestation, this plant remains a dominant species in most of its range.
Successful plantations of dryland Khaya senegalensis in other parts of the world have generally been in areas with short dry seasons and high rainfall.
Trees start producing seeds when they are 20-25 years old and can be grown in coppice.
Natural regeneration by seed is poor, although the tree produces suckers and can grow back from them; furthermore, although older trees are fire resistant, young seedlings are quite susceptible.
However, propagation occurs by seed which can remain viable for a year or more, but germination is much better from fresh sown seed.
Sowing in lightly shaded nursery seedbeds has been shown to give better results than sowing in containers. Germination can begin in about 3 weeks.
The technique involves placing the potted seedlings in individual containers when they are about 5 cm tall and then grown for about 12 months until they are 30 cm tall and ready to be planted.
Trees are successfully planted bare root, but using containerized seedlings produces better results.
The seed pods are cut out of the trees as the pods begin to divide. The capsules are dried in the sun until they split and then shelled by hand. The seed is further dried and then stored in sealed containers in the refrigerator, as viability is quickly lost at room temperature.

Customs and Traditions –
Khaya senegalensis is a plant widely used in its range and in the countries where it is cultivated and in addition to the use of timber it is used during the dry season as forage for livestock. In addition, the bark is often collected on plantations by indigenous peoples and used for the treatment of many diseases. The seeds of the plant have an oil content of 52.5%, consisting of 21% palmitic acid, 10% stearic acid, 65% oleic acid, and 4% other acid compounds.
The oil is used in West Africa for cooking.
Wood is used for a variety of purposes. It is often used conventionally for carpentry, interior finishing and construction. Traditionally the wood was used for canoes, household tools, djembe and firewood. The bitter-tasting bark is used for a variety of medical purposes; it is taken against fever caused by malaria, stomach upset and headache. It is applied externally to heal rashes, wounds or any abnormalities. It has been exported from West Africa (Gambia) to Europe since the first half of the 19th century and has been extensively exploited for its timber.
Now this plant is used more locally and is also planted as an ornamental to form tree-lined avenues.
The timber of this plant is very important and valuable, the tree is widely exploited throughout its range and is also cultivated in plantations. It is one of the hardest African mahogany and is the hardest of the Khaya species. It is widely used on a commercial scale, particularly in West Africa.
Unfortunately, logging and local exploitation are largely uncontrolled and poorly monitored. In the northern parts of the range, exploitation can lead to genetic erosion. Natural regeneration from seed is poor but occurs from suckers. The tree was classified as “vulnerable” on the IUCN Red List of Threatened Species (2010).
As a medicine it is used in the Ivory Coast as an ingredient in arrow poison. The flakes of the bark are sometimes used as a poison for fish.
The very bitter bark has a considerable reputation in its natural area as a remedy for fever. It is also used as a laxative, vermifuge, tenicide, purifier and to treat syphilis.
The bark extract is used to treat jaundice, dermatosis, scorpion bite, allergies, gum infections, hookworm, bleeding wounds and as a disinfectant.
Crushed bark and seeds are considered an emmenagogue.
The seeds and leaves are used to treat fever and headache.
The roots are used as a cure against infertility, for the treatment of mental illnesses, against syphilis, leprosy and as an aphrodisiac.
Among other uses, it should be remembered that the presence of oleoresin in the vessels of the Khaya species explains the durability of the wood and its resistance to attack by insects and fungi.
The bark is in fact used in tanning.
The young twigs are used as toothbrushes, while the peeled stem or root is used as chewing sticks to maintain oral hygiene.
Wood ashes are used to store millet seeds.
The heartwood is an attractive dark brown-red color, often with a purple tinge; usually, but not always, it is clearly delimited by the 3 – 8 cm broad band of the pinkish-brown sapwood. The texture is medium; the intertwined grain; the shiny wood. The wood is hard enough; moderately heavy; moderately durable, being resistant to woodworm attacks, moderately resistant to fungi, but susceptible to termites. Wood ages normally, with only a slight risk of resistance to distortion in the presence of highly intertwined taut wood and veins; once dried it is stable in operation. Wood works well with normal tools, although these need to be sharpened as there is a tendency to be woolly to cross grain; nailing and screwing are good, although pre-drilling is recommended; gluing is correct. Wood is preferred for good quality furniture, high class woodworking, finishing and boat building. Wood is also used locally for railway sleepers, flooring, turning and veneer. Due to its decorative appearance it is a very popular wood.
Wood is used in West Africa for pulp and only limited quantities of firewood are available and larger trees are undesirable due to the difficulties of splitting and cross cutting. So even if firewood is in short supply, larger diameter sections are not used. The gross energy value of wood is 19 990 kJ / kg.

Preparation Method –
Khaya senegalensis is a plant that is greatly exploited both for the use of its wood for various uses and for medicinal and food purposes.
In the diet, the oil from its seeds is used for cooking.
In the medicinal field, the bark is used, which is very bitter, and has a considerable use against fever but is also used as a laxative, vermifuge, tenicide, purifying and to treat syphilis.
The bark extract is used to treat jaundice, dermatosis, scorpion bite, allergies, gum infections, hookworm, bleeding wounds and as a disinfectant.
Crushed bark and seeds are considered an emmenagogue.
The seeds and leaves are used to treat fever and headache.
The roots are used as a cure against infertility, for the treatment of mental illnesses, against syphilis, leprosy and as an aphrodisiac.