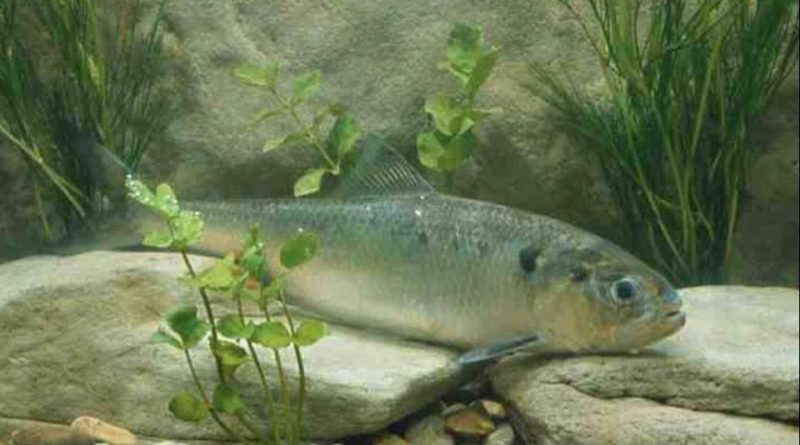 The Allis shad (Alosa alosa Linnaeus, 1758) is a fresh and marine water fish belonging to the Clupeidae family.

Geographic Distribution and Habitat –
The Alosa alosa is a fish found in the eastern Atlantic Ocean, between Norway and Mauritania, it is also found in the western Mediterranean Sea and in the western part of the Baltic Sea. In the Mediterranean it is very rare and only a few reports are known for Italy.
Its habitat is that of the sea, in open waters at 200 to 300 m. deep, with a pelagic lifestyle and makes long migrations. It becomes gregarious in the moment that it goes up the rivers in the period of reproduction. 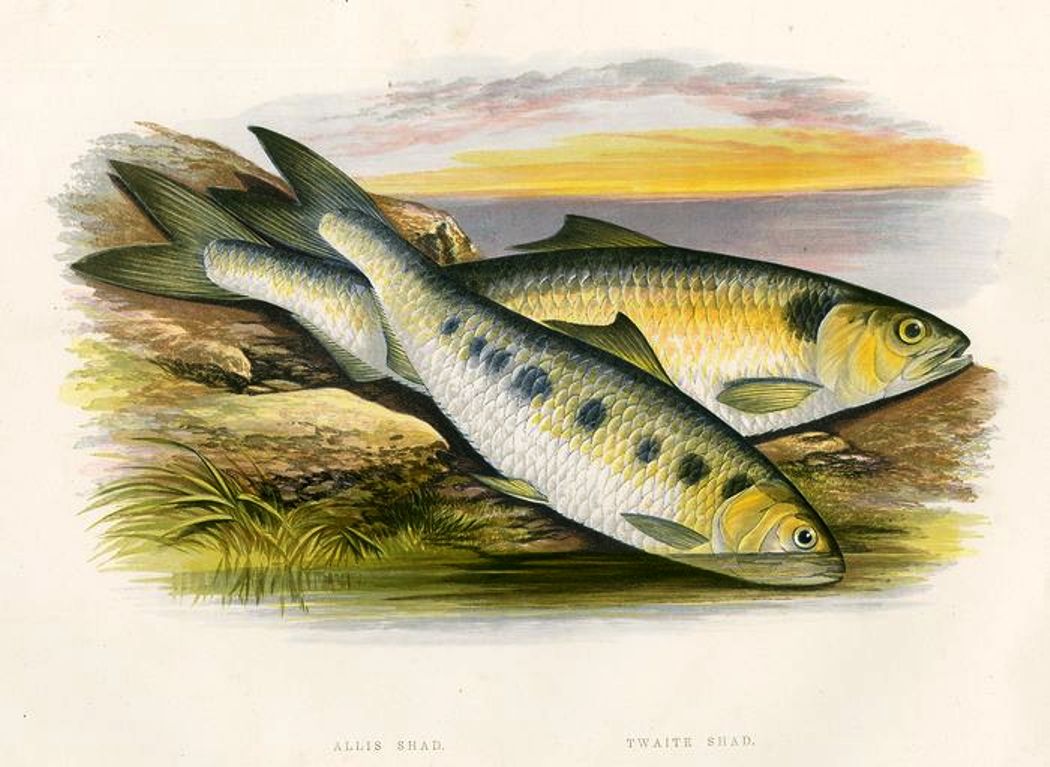 Description –
The Alosa alosa is a fish with minimal sexual dimorphism except for the females which tend only to be a little larger than the males and which reaches dimensions up to 4 kg by 70 cm in length.
It has a tapered and laterally compressed body, covered with caducous cycloid scales (on the lateral line 70-80). The scales along the ventral surface form a sharp keel, before and after the ventral fins.
The head is high, compressed and wedge-shaped. The eye is covered by an extended adipose eyelid, which opens with an elliptical vertical slit at the pupil.
The mouth is wide, with teeth on the jaws, but not on the palatine. The spines are numerous and thin.
The dorsal fin is inserted about the same vertical as the base of the ventral fins; the anal does not have the last two elongated rays and the pectorals are inserted a little further forward than in A. fallax. At the base of the ventral there is a large elongated scale and others, two on each side, are at the base of the caudal.
This fish has a greenish blue color on the back, silvery flanks, in those caught in the rivers the back is more greenish. There is a black spot behind the postero-superior corner of the operculum, sometimes followed by other spots.

Biology –
Adult individuals of the Alosa alosa reach the coastal waters towards the end of February, while the ascent of the rivers begins when the water reaches a temperature of about 10 – 12 ° C, generally in late spring. The resporudizone takes place in the main course of the river or in the tributaries of greater flow, when the water temperature exceeds 15 ° C (thermal optimum between 22 and 24 ° C).
The deposition and the fertilization are collective, they take place on the surface during the night, in areas with a strong current, often at the confluence of a tributary. Each female lays on average from 50,000 to over 200,000 eggs, which are whitish in color, with a diameter of about 2 mm.
After fertilization, the eggs descend to the bottom and drift carried by the current. At temperatures between 20 and 24 ° C, embryonic development takes about 4 – 5 days. After reproduction, the adults almost always die and, in any case, have an average life span of 5-6 years (maximum age 10 years) and reach sexual maturity starting from the fourth year, moreover most of the fry go down to the sea during the first summer. of life.

Ecological Role –
In the marine environment, the adults of Alosa alosa feed on plankton, small fish and fry. The main components of the diet are represented by copepod crustaceans (Calanus sp.), Decapods (Pandalus sp.) And eufausids (Meganyctiphanes sp.). From a study carried out on adults of A. alosa captured in Irish waters, the crustacean Praunus neglectus emerged as the main prey, which constituted 99.9% by number and 96.8% by weight of the stomach contents, the remaining component of the diet was represented by small fish (Sprattus sprattus). During the reproductive migrations, the adults do not feed. In fresh water the “landlocked” and immature populations feed mainly on cladocera and copepod crustaceans.
This species is occasionally fished with bottom trawls.
Once the Alosa alosa fishing was an important source of income for the populations of northern Europe. In the Dutch stretch of the Rhine, up to 136,000 individuals per year were captured in the early 1900s. Today the quantity of catches is almost nil. Its commercial value is not relevant. The meats are considered fair (better those of freshwater subjects) and are sold fresh, smoked or dried. The discarded shads are made into fishmeal or used as bait to catch other marine fish.
This species was also the object of intensive professional fishing in the estuaries, with trammel nets and purse seines; today it is occasionally fished with trawl nets. Sport fishing is practiced in river waters during the reproductive whipping, with casting rods and artificial baits (rotating spoons with 1-2 blades, small undulating spoons with simple hook, large artificial flies).
Even if it is not of great importance for fishing because of its meat, good but full of bones, for the sport fisherman it represents a respectable prey for the strength it opposes to the capture. It is fished with the technique of fly or spinning.
As for the status of the species, with the exception of French waters, where it appears relatively numerous, A. alosa has a very localized distribution. In the past, the species has been affected by pollution, by the loss of suitable places to scrub due to the construction of impassable barriers on the main rivers and by excessive pressure due to fishing. It now appears that the decline, which began in the early decades of the 20th century, has come to a halt, and populations have stabilized at medium and low levels. In fact, the species has returned to populate those rivers where special passages have been built to allow the passage towards the breeding grounds and the sea.
This species is mentioned in Appendix III of the Bern Convention (protected fauna). In the IUCN Red List (International Union for Conservation of Nature and Natural Resources) the species is classified as Least Concern (LC).
Furthermore, this fish is preyed upon by various species of fish and ichthyophagous birds. Various species of parasites have been observed, including the monogenous fluke Mazocraes alosae, the digenei flukes Pronoprymna ventricosa, Diplostomum gasterostei, Diplostomum spathaceum and Hemiurus appendiculateus, the nematodes Hysterthylacium osculatum and Hysterthylacium ile clavothosa fragile.