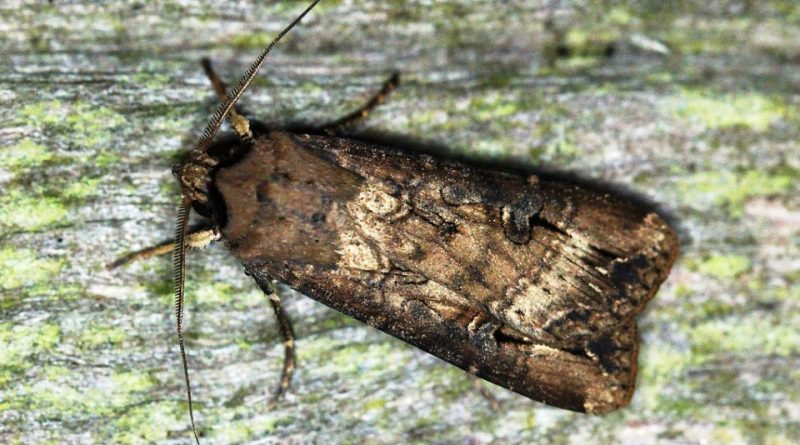 The dark sword-grass or black cutworm (Agrotis ipsilon Hufnagel, 1766) is an insect belonging to the Noctuidae family.

Geographic Distribution and Habitat –
Agrotis ipsilon is a small nocturnal moth found all over the world.
Populations of this species have been found in southern Canada, the United States (including Hawaii), Mexico, Central and South America, Australia, New Zealand, the Pacific, North Africa, Europe and Asia.
However, these insects are absent in some tropical regions and colder areas and are more common in the northern than the southern hemisphere.
In addition, this species is also known to migrate north in spring and migrate south in autumn.
The caterpillars of this butterfly can feed on many cultivated plants including: Potato, Cereals, Tobacco, Corn, Beetroot, Asparagus, Onion, Lettuce, Chicory, Tomato, etc.

Morphology –
Agrotis ipsilon is a medium-sized butterfly, whose adults have a wingspan of about 50 mm, with brownish front wings and very pale beige hind wings; the livery is enriched by a characteristic blackish design in the shape of an arrow or Y placed on the wings.
The larvae measure on average 45 mm, are gray in color with, on each of the segments, with 4 black points arranged in a trapezium and yellowish brown head.

Attitude and Life Cycle –
The Agrotis ipsilon is a nocturnal subject subject to seasonal migratory phases; these migrations are carried out by adults who move from dry and arid areas to more humid areas, causing concentrations that are harmful to crops. This nocturnal overwinters as a larva or as a chrysalis.
In the spring period the larvae can have a short trophic activity and therefore they crystallize; adults flicker in late March-early April.
In certain climatic conditions, migrant adults can arrive from the warmer countries of the South.
To attract males to mating, females release sex pheromones. The production and release of pheromones in females and the response to pheromones in males depend on the juvenile hormone (JH) and the pheromone biosynthesis activating neuropeptide (BPAN).
After mating, the females lay eggs in the ground or at the base of the host plants; from these eggs we have the first larval generation, which is active from late spring-early summer. From these larvae, once the development cycle is complete, the second generation of adults originates and flickers in June-July.
The larvae of this second generation are active in the middle of summer.
These two generations can be followed, depending on the climatic conditions, by a third and a fourth generation while some adults can migrate to other areas.
This insect thus completes from 2 to 4 generations depending on the climatic conditions.
The transition between the various stages of this insect can take place within just two months.
The damage is determined by the larval stages, which with their trophic activity create small erosions of the leaves by the young larvae and, subsequently, deeper damage occurs on the collar and to the hypogeal organs, by the more developed larvae.

Ecological Role –
The dark sword-grass is a moth whose larval form can cause various damage to cultivated plants.
To define the possible intervention threshold, it is necessary to monitor with sexual traps. This monitoring can be done using both typical monitoring traps and bulk (funnel) traps.
The traps should be placed in the vegetation towards the end of March, generally at the edges of the field.
It is difficult to establish a precise intervention threshold both for the great diffusion of this insect and for the great polyphagia of the phytophagous; nevertheless, following the flickering and eventual presence peaks, constitutes an important parameter for the timely detection of the first massive attacks.
It is therefore necessary to carry out a direct survey especially in the early stages of development and in flight periods, to signal the first attacks on the plants.
The recommended threshold for intervention corresponds to the presence of 1-2 larvae of 3rd or 4th age or 1-2 plants with detectable damage per square meter (up to the stage of 8-10 leaves). The fight can be done both with treatments on the vegetation and with poisoned baits, depending on the type of larvae present.
The fight in the open field is carried out on the young larvae that do not exceed 2 cm in length, with insecticides.
The products used, to have a better efficacy of the treatment, can be mixed with sugary products (molasses or sucrose). The treatments must be performed at dusk, with moist soil and with a lot of carrier liquid, to leach the insecticide also on the collar.
Poisoned baits are used against already developed and buried larvae; these baits are prepared with molasses or sugar and vegetable residues or bran. The baits should be distributed in the evening, with moist soil and placed in sectors and not across the board.
However, it should be remembered that during the biological cycle of Agrotis ipsilon, this can be parasitized by some organisms such as the nematode Hexamermis arvalis or by the insect Archytas cirphis.
For this reason it is appropriate to apply agroecological techniques in crops avoiding specialization, favoring rotations and some appropriate associations.