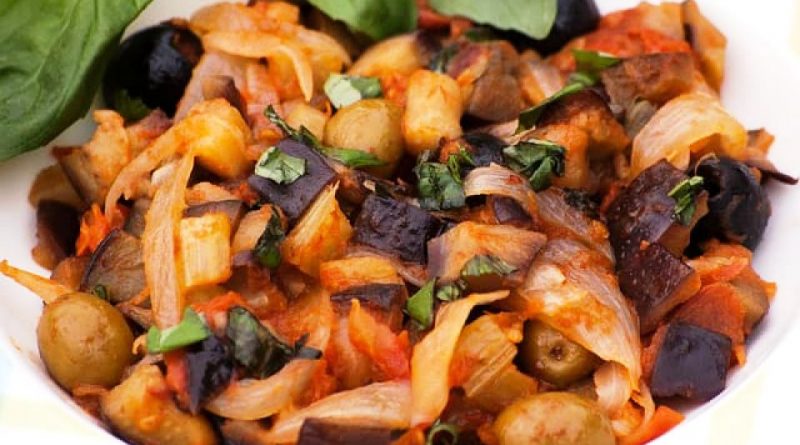 Caponata is a typical product of Sicilian cuisine and listed in the list of traditional Italian food products (PAT) established by the Ministry of Agricultural, Food and Forestry Policies (MIPAAF) with the collaboration of the Regions.

Origins and History –
The caponata, is a culinary preparation, widespread throughout the Mediterranean Sea, is generally used today as a side dish or appetizer, but since the eighteenth century it was a single dish, accompanied by bread.
The etymology of the word refers to the Spanish caponada, an entry with a similar meaning. A real popular etymology should be considered that which traces “caponata” to “capone”, the name with which in some areas of Sicily the dolphin fish is called, a fish with a fine but rather dry meat that was served in the tables of the aristocracy seasoned with the sweet and sour sauce typical of caponata.
In fact, since, at that time, the people could not afford the expensive fish, they replaced it with cheap aubergines. And this is the recipe that has come down to us. Some say that the name of the dish derives from “caupone”, taverns of sailors.
According to others, the term is, on the other hand, probably more ancient and is the one that could give us the direct meaning, akin to the way of cutting vegetables and therefore from Captos, Capto or cut.
In fact, the characteristic of Caponata is precisely the presence of various vegetables cut into pieces of more or less the same size, in reference to the variety of vegetables. The Caponata that we all know, has dozens of variations.
Another school of thought brings us back to the Latin one, Caponata – Caupona – Cauponium or tavern. The tavern is actually not a place to be underestimated, because it can be traced back to that meeting place of all the sailors who, tired from work, went to drink a glass of wine and eat a piece of toast seasoned with garlic, oil, olives, capers and anchovy. Poor food, but of particular satisfaction.
Cappon magro is an ancient traditional Ligurian dish based on fish and vegetables. The term “lean” indicates a dish reserved for days of penance and Lent. The fish and vegetables of which it is composed are arranged on a biscuit base. The cappon magro could also be a reference to the base of dry bread or biscuit, similar to the French ‘chapon’, a large crouton of toasted bread rubbed with garlic and used for soups.
Reflecting on the method of execution of the Caponata it is obvious the gastronomic growth linked to the different dominations that over time have been present in Sicily and that have left their gastronomic imprint: Greeks, Arabs, Romans, French.
In any case, the first written document that refers to caponata is the Etimologicum Siculum of S.Vinci, which in 1709 defines it very generically “acetarium et variis rebus minuteum conficis”, that is, “salad and various small things prepared”. Later, in 1853, the Palermo historian Vincenzo Mortillaro speaks of it as an “appetizing delicacy” and in his Sicilian-Italian Dictionary he describes it as follows: “fish, petronciane (ancient name of aubergines) or artichokes and other condiments, it is eaten for the mostly cold, or between one dish and the other for the sake of taste, or after hot first courses “.
But there are numerous variations of caponata, according to some 37, and among the main ones we can include the Palermo version, which is the simplest and most classic, the version from Agrigento, the Catania variant, the Trapani variant and the variant with peppers of a portion of province of Agrigento.
The main versions of caponata are:
– the one from Palermo, which is the simplest and most classic version, in which the ingredients are: eggplant (the long Palermo violet or the long black), green or white olives, onion, celery, capers, tomato sauce, oil, salt, vinegar and sugar. In some variations basil, pine nuts and grated toasted almonds are added. The original recipe strictly requires that the aubergines to be fried are cut into not small touches (about 4-5 cm per side) – whole Sicilian olives crushed and without pits (never pitted olives like aperitif) clearly visible chunks of celery, Sicilian capers and sweet and sour marked, onions cut into small pieces;
– that of Agrigento, in which the ingredients are aubergines, arramascati peppers (friggitelli in Rome), tomato, white or red onion, celery, green olives, black olives, capers, vinegar, honey, sugar, garlic, oil and chilli, basil, pine nuts o almonds (very present in the area) dried raisins;
– the Catania caponata which is distinguished from the other caponata for the predominance of aubergine and tomato, combined with pine nuts and fresh basil;
– the Trapani caponata, which together with aubergines, peppers, onions, ripe tomatoes, celery, green olives, capers, vinegar and sugar, are added toasted almonds;
– the variant with peppers, typical of the municipalities of Platani, Quisquina and Magazzolo; there are two variants of this: the first Ciancianese foresees the prevalence of artichokes, in addition to peeled tomatoes, green olives, lemon juice, celery, and onion; the second version of Bivona involves combining the basic ingredients of caponata and local peaches and seasonal pears;
– to these are added some variations, some use artichokes and others where the percentages of the various ingredients and the way of preparing them changes.

Geographic area –
Sicilian caponata is a dish that is known and appreciated not only in Sicily, but also in the rest of Italy and a little around the world.
Over time, the caponata, from a dish known and consumed only locally in the Sicilian territory, has become known throughout the world thanks to the industrial activity started in 1869 by the Pensabene family and subsequently by the Fratelli Contorno, an ancient family of canneries from Palermo. It was produced industrially in the ancient factory in Corso Tukory in Palermo (still visible today but in disuse), canned in cans made and welded by hand, and from there it was spread, marketed and appreciated by consumers from various parts of the world, especially in the USA where Sicilian emigrants rediscovered the flavor of their cuisine.

Raw material –
The caponata is made up of different raw materials which, also depending on the different variants, complicates even more a unitary description. However, in the simplest and most classic version, which is the Palermo one, the ingredients are: aubergines (the long Violetta from Palermo or the long Nera), green or white olives, onion, celery, capers, tomato sauce, oil, salt, vinegar and sugar. In some variations basil, pine nuts and grated toasted almonds are added. The original recipe strictly requires that the aubergines to be fried are cut into not small touches (about 4-5 cm per side) – whole Sicilian olives crushed and without pits (never pitted olives like aperitif) clearly visible chunks of celery, Sicilian capers and sweet and sour marked, onions cut into small pieces.
Other ingredients are then added to this basic recipe, as seen in some variations, and different methods of preparation even if the final overall appearance is always very similar.

Description –
It is in fact the method of processing vegetables and greens and the way of assembling them that make caponata a dish, as well as typical, quite characteristic.
The caponata is in fact a set of vegetables (mostly aubergines), seasoned with tomato sauce, celery, onion, olives and capers, in a sweet and sour sauce.
The different versions differ mainly on the presence and percentage of the various ingredients.

Production Method –
For the preparation of the caponata it is necessary to proceed to a preventive cutting of various vegetables in pieces of a few centimeters. This is done by cutting the aubergines into chunks, frying them in plenty of hot oil and leaving them to drain.
Then cut the onion into thin slices and fry it in a pan with extra virgin olive oil, then leave it aside.
At this point, cut pieces of the celery stalks and blanch them. When these are cooked, they are drained and browned in the pan where the onion was previously fried.
Then add the green olives cut into small pieces and the previously desalted capers.
The preparation ends by adding the tomato paste, sugar, vinegar and a glass of water and let it cook until everything is flavored (at least 30 minutes).
At this point, add the previously fried aubergines, making them flavor and turning off the heat.
To this basic version must then be added, as mentioned, some variations in the ingredients and in some preparation procedures.

Gastronomic use –
The gastronomic destiny of caponata is that of a vegetarian side dish; to accompany dishes of all kinds: from a main course of meat, fish, eggs, cheeses; just like the peperonata, also the caponata, can be served both hot and cold.
Caponata is also excellent for filling sandwiches, pizzas, focaccia, cold pasta, croutons, bruschetta and friselle and as an appetizer.