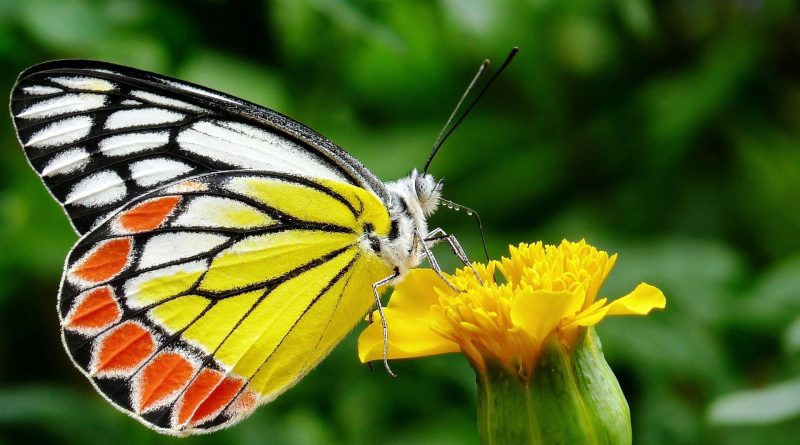 The extraordinary life of butterflies

Butterflies, together with moths, are insects that belong to the order of Lepidoptera.
The distinction between butterflies and moths does not respond to a taxonomic scientific classification but derives from common usage.
Butterflies generally have diurnal habits and have club-like antennae, unlike those of moths which are often combed or thread-like and close their folding wings in a resting position.
Although this distinction is no longer considered valid, it is still sometimes used by entomologists for practical reasons, since it corresponds to differences in the methods of study of the different groups.
What all butterflies have in common is that they have a fascinating and complex life cycle.
These insects, in fact, undergo a complete metamorphosis with four completely different life stages:
– egg;
– caterpillar (or larva);
– chrysalis (or pupa);
– adult individual.
At each stage there is a close dependence on its own “host plants”, that is, those plants on which the adult lays its eggs, which the caterpillar feeds on exclusively and where it often fixes itself once it has transformed into a chrysalis.
The life of a new butterfly individual begins with spawning.
The mode of spawning in these animals is twofold. In species that have a close relationship with the host plant, a few dozen eggs are laid, this is because the larvae enjoy an immediate availability of food.
In other species, on the other hand, such as the Galatea (Melanargia galathea Linnaeus, 1758), these scatter hundreds of eggs while flying over a grassy area, because in this case the task of finding the host plant is delegated to the larvae and, consequently, the risks of predation increase.

The eggs, just before the time of hatching, turn dark and the young caterpillar can be seen moving inside.
The caterpillar has a slightly flattened cylindrical shape, often camouflage but sometimes very colorful and usually numerous hairs and bristles on the body. It moves by means of three pairs of short thoracic legs and to move easily on the vegetation it uses special false abdominal legs equipped with a structure similar to a sucker. It has a chewing-like mouthparts, with powerful mandibles that greedily grind the leaves of the host plant. During growth, the caterpillar must make a series of moults, on average 4-5 during its larval life, after which it transforms into a chrysalis, closing itself in a hard and leathery cocoon in which it will undergo a series of transformations until it becomes a butterfly.
The chrysalis, in most cases, by means of silky threads, is fixed to the host plant, but many prefer to hide among the stones or in the herbaceous layer. The chrysalises have generally mimetic coloring: they preferably simulate parts of the plant, but at times they have an appearance similar to that of a bird droppings to escape predators.
When the environmental conditions and especially the temperature are optimal, the chrysalis coating begins to break, allowing the adult butterfly to escape. As soon as it comes out, the adult has still damp and crumpled wings and is therefore unable to fly; before being able to take off the maiden flight, it must, therefore, wait for the wings to dry and warm up and for the hemolymph to begin to flow inside them to allow them to fully expand.
Particular is the life span of butterflies.
These can live on average for a month, but some species die only after a few hours, while others reach the age of one year. Monarch butterflies (Danaus plexippus Linnaeus, 1758), which live between the United States and Mexico and migrate thousands of kilometers, can live from two weeks to eight months. In Costa Rica there are butterflies that do not live more than two days, while the Vanessa antiopa (Nymphalis antiopa Linnaeus, 1758) can reach almost one year of life. The longevity record belongs to a moth, which feeds on a plant called Yucca baccata: its pupa can live up to 30 years before emerging as an adult.