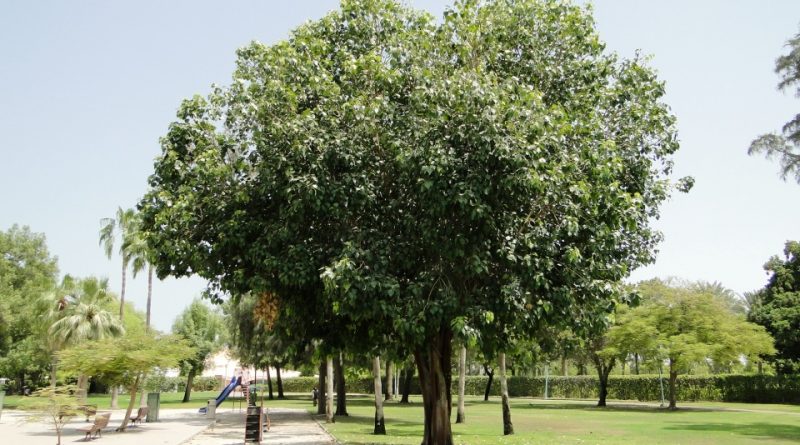 Etymology –
The term Ficus is the classical Latin name of the fig, a genus already known then, probably derived from Hebrew.
The specific religious epithet comes from religio, veneration of the gods, sacred, venerable for ancient rituals connected to these entities or for the imposing bearing.

Geographic Distribution and Habitat –
Sacred fig is a plant native to India, southwestern China and the part of Indochina east of Vietnam. Its distribution range includes East Asia: Bangladesh, India, Nepal, Pakistan, Myanmar.
Its habitat is that of the submontane forest at altitudes of up to 1,520 meters. 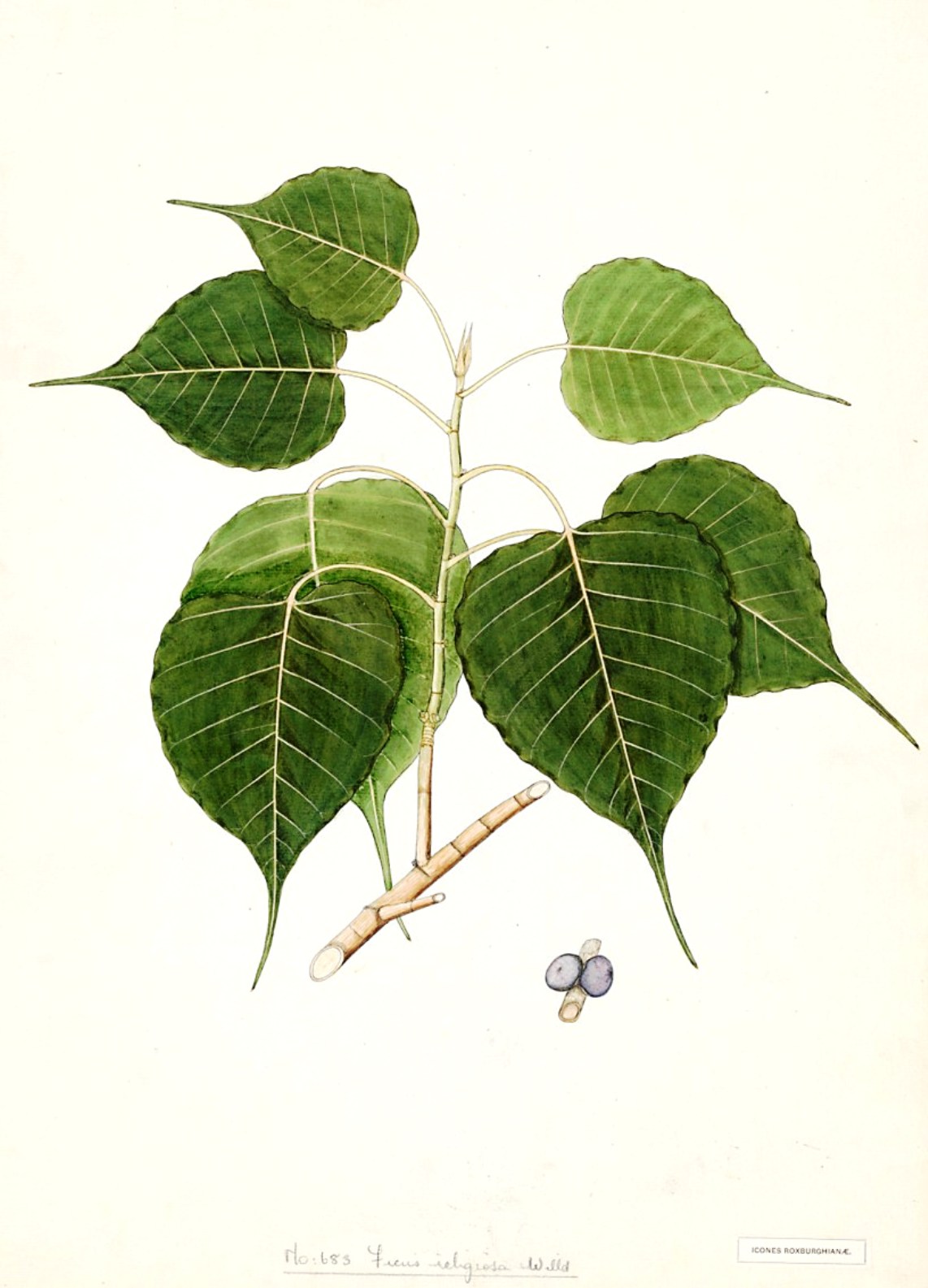 Description –
Sacred fig is a semi-evergreen tree, with a large crown whose deciduous leaves fall in the dry season, up to 30 m tall, with a stem diameter of up to 3 m. In older trees the trunk can become reinforced by and have a diameter of up to 270 cm
The leaves are cordate (ie heart-shaped) with a particularly elongated tip, 10–17 cm long and 8–12 cm broad, with a 6–10 cm petiole.
The fruit is a small syconium 1-1.5 cm in diameter, green which ripens to purple.

Cultivation –
The sacred fig is a semi-evergreen tree that often begins life as an epiphyte in the branch of a tree; as it ages it sends down aerial roots which, when they reach the ground, quickly form roots and become much thicker and more vigorous. These provide nutrients to the fig tree, allowing it to grow faster than the host tree. The aerial roots gradually surround the host tree, preventing its main trunk from expanding, while at the same time the foliage suffocates the host’s foliage. Eventually the host dies, letting the fig tree continue to grow without competition.
This plant grows in tropical and subtropical areas at altitudes up to 1,520 meters and prefers areas where average annual temperatures are between 16 and 35 ° C and average annual rainfall is between 500 and 5,000 mm.
Even if it prefers a position in full sun, it can also grow in dim light and prefers a good moist but well drained soil.
From a pedological point of view it grows on a wide variety of soils but prefers deep alluvial sandy soils and is also found on shallow soils, including rocky crevices.
This ficus, like others of its genus, has a particular form of gamic production. Each species in this genus relies on a single, highly specialized wasp species that is itself totally dependent on that fig species to reproduce. Trees produce three types of flowers; male, a long-styled female, and a short-styled female flower, often called the gall flower. All three types of flower are contained within the structure which is usually improperly called fruit.
The female wasp enters a fig tree and lays eggs on the short-styled female flowers while pollinating the short-styled female flowers. Wingless male fig wasps emerge first, inseminate emerging females, and then pierce the fig tree exit tunnels for winged females. Females emerge, collect pollen from male flowers and fly away in search of figs whose female flowers are receptive. To support a population of its pollinator, individuals of a Ficus spp. it must flourish asynchronously. A population must exceed a critical minimum size to ensure that at any time of the year at least some plants have the emission and reception overlap of specific Ficus wasps. Without this temporal overlap, short-lived pollinating wasps will become locally extinct.
The propagation of this plant can take place by seed with sowing to be carried out, preferably, at a temperature of about 20 ° C. sowing must be done outdoors.
It can also be propagated by cuttings by arranging cuttings about 4 – 12 cm long, taken from the lateral branches.

Customs and Traditions –
The Sacred fig is called in Sinhalese bo, in Sanskrit pipal or aśvattha.
The tree is harvested in its natural state for local use as a food, medicine and source of materials. It is grown in the tropical regions of the world, mainly as an ornamental tree with various uses.
This is the species under which the Buddha sat when he reached realization. As such it is a sacred tree for Buddhists and has been introduced to many other predominantly Buddhist countries, such as Myanmar, Malaysia, Thailand, Vietnam, and southern China.
Among the various uses we mention the edible ones; fruits are eaten which, however, are not tasty. Small figs are mainly used as food in times of greatest famine, when nothing better is available.
Among the medicinal uses are used the leaves and twigs that are used as alterative, antidote, aphrodisiac, astringent, antigorrhoeic and laxative.
Its use as an antidote is against the bites of poisonous animals and for the treatment of hemoptysis and fistulas.
The fresh sap from the leaves is used to treat diarrhea, cholera, and for wound healing.
An infusion of bark is drunk as an antidiabetic while a decoction of the bark is used as a skin cleanser to treat scabies, ulcers and skin diseases.
The aerial roots are diuretic and are used in the treatment of ascites and are chewed by women to promote fertility.
The bark contains tannins and is used as a dye for fabrics.
A latex obtained from the plant is used for the production of paints.
From this a gum is obtained which is used as a sealing wax. It is used by craftsmen to fill the cavities of the ornaments.
The fibrous bark is used to make paper. The wood is greyish-white in color and is very light and very soft. It is moderately durable indoors and tough enough underwater. The wood is still of low quality but can be used to pack boxes and matches; it is also used as a fuel.
Among the various specimens of this plant we remember the Sri Maha Bodhi which is a famous specimen, which is found at the Mahabodhi temple; it is known that it was planted in 288 BC, and this is the greatest verified age of a specimen of the angiosperms, and of any tree planted by man; he was born from the Bodhi tree, under which the bodhisattva Gautama is said to have meditated when he attained bodhi (enlightenment) and became the Buddha; even today monks and lay people often meditate under this tree.