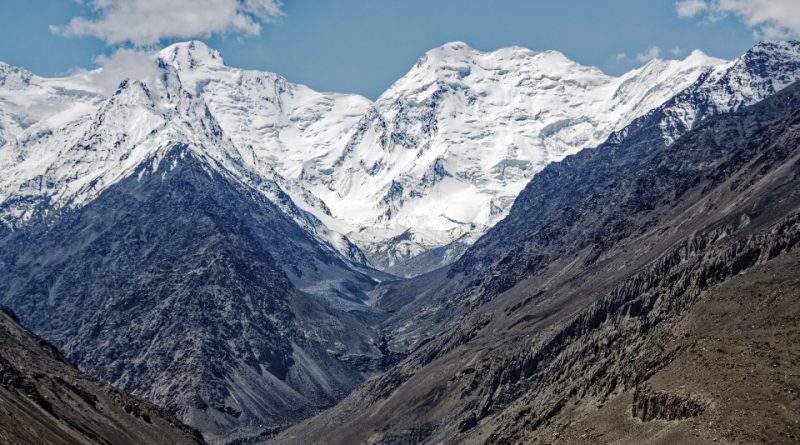 Pakistan is a South Asian state and is the fifth most populous state in the world, with a population exceeding 233 million people: this country has an area of ​​803 940 km².
In the southern part it has a coastline that stretches for 4,600 miles (4,600 kilometers) on the Arabian Sea and the Gulf of Oman; it borders to the east with India, to the west with Afghanistan, while with Iran and China it borders respectively to the south-west and the extreme north-east. To the north it is separated from Tajikistan by the Afghanistan Wacan corridor, while also sharing a maritime border with Oman.
The territory of this country has been populated since ancient times by major civilizations, including the Mehrgarh of the Neolithic and the Indus Valley Civilization of the Bronze Age. It was later succeeded by kingdoms ruled by people of different faiths and cultures, including Hindus, Indo-Greeks, Buddhists, Muslims, Turkish-Mongols, Afghans and Sikhs. Numerous empires and dynasties ruled there, including the Bengali Maurya Empire, the Persian Achaemenid Empire, Alexander of Macedon, the Umayyad Arab Caliphate, the Sultanate of Delhi, the Mongol Empire, the Mughal Empire, the Durrani Empire, the Sikh Empire and the British Empire.
Politically, Pakistan is a federal parliamentary republic composed of four provinces and four federal territories. It is an ethnically and linguistically diverse country, with a similar variation in its geography and wildlife.
From a geographical point of view, Pakistan is located in South Asia, between 24 ° and 37 ° north latitude and 61 ° and 77 ° east longitude.
The northern and western areas of Pakistan are mountainous. The Pakistani-administered part of Kashmir includes some of the tallest mountains in the world, including the second highest, K2. In this area are concentrated the highest percentages of forests, pastures, biodiversity, medicinal plants, and protected areas in the nation. The territory is used as arable land, for grazing or for forestry, based on both the climate and the altitude, the physical-geographical aspect, the soil moisture and socio-economic conditions. Over 90% of the region is made up of steeply sloping mountains with a very thin and fragile layer of soil. Generally, the instability of these territories makes them scarcely cultivable and rather arid.
The Indus River basin plays an important role in the economy and ecology of this country. The territory, with the exception of the Dashte and Hingol rivers, includes a large part of the Indus basin, which is very important if we consider that the economy of Pakistan, a very arid country, is essentially conditioned by the availability of water that this river and its tributaries can provide.
Like those of the Ganges, the floods of the Indus are experiencing incalculable violence, also due to their enormous flood masses; On the other hand, the beneficial effect of these colossal floods is evident: they allow the irrigation of summer crops and, where possible, the damming of water, including winter ones. 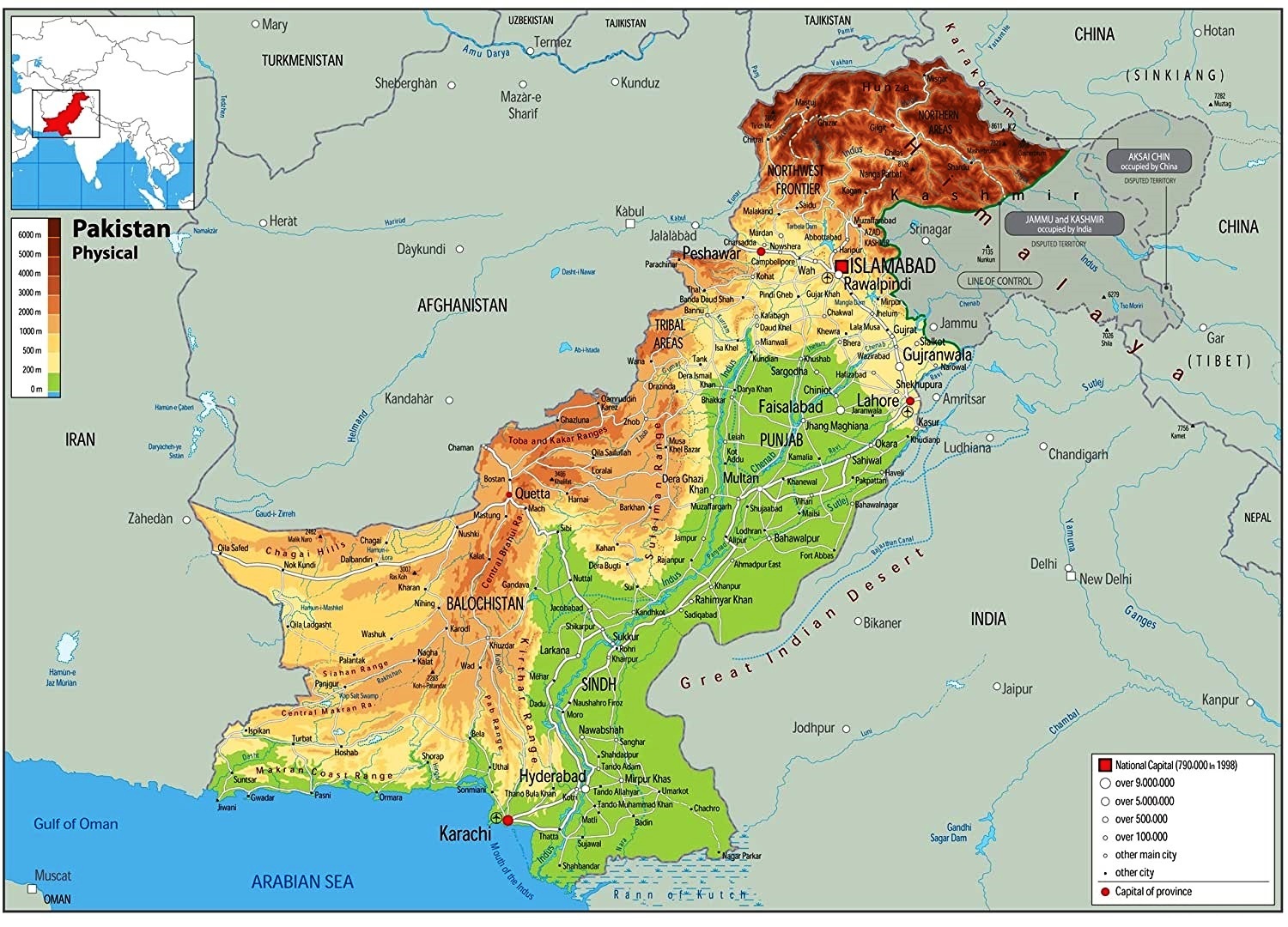 Climate –
Pakistan is characterized by a basically arid climate, with some characteristics similar to those of the Mediterranean, which is therefore quite distinct from the tropical monsoon climate that is prevalent in India. In fact on the territory of Pakistan the monsoon influences of the Indian Ocean reach very attenuated and are felt above all on the Himalayan slopes, while Pakistan is open to hot and dry winds coming from the southwest.
During the summer, rainfall becomes very scarce in most parts of the country. On the other hand, winter precipitations are more relevant, determined by the low pressure regime that forms at the margins of the high continental pressures, as well as in the Mediterranean.
The total annual rainfall, which varies from area to area, in the whole central and southern section of the country does not exceed 400 mm; there are greater peaks in the Punjab area and even more in the early reliefs. On average, however, they rarely exceed 500 mm per year and in some areas they do not even reach 200 mm.
The mountainous areas of Pakistan are characterized, on the other hand, by the same seasonal excursions, but with significantly lower values. There are different conditions in the coastal strip: due to the mitigating action of the ocean, temperatures in the cold months are higher with averages of 22-23 ° C and much lower in the summer months (28 ° C).

Flora –
The flora of Pakistan is very variable and influenced both by the great difference in latitude and in the altitudes present in this country. The Indus river basins and periodic monsoon winds also play an important role.
The various forests can be formed by alpine and sub-alpine conifers, such as firs, pines and cedars of the Himalayas, in the northern mountains or by deciduous trees, such as the mulberry-like shisham, in the Sulaiman Mountains to the south. On the western hills, junipers and tamarisks grow, as well as sparse tufts of grass and shrubs. Along the southern coasts much of the coastal swamps are made up of mangrove forests.

Fauna –
The fauna is also varied and with considerable differences linked to the diversity of habitats.
Pakistan’s national animal is the markhor and its national bird is the chukar, also called chakhoor in Urdu.
In the south, crocodiles swim in the muddy waters of the Indus estuary, while wild boars, deer, porcupines and small rodents live on the banks of the river. In the sandy thickets of central Pakistan there are jackals, hyenas, wild cats, panthers and leopards and in the blue skies above fly hawks, hawks and eagles. In the south-western deserts survive the very rare Asian cheetahs. A variety of endangered species are found in the northern mountains, including Marco Polo sheep, urial sheep, markhor, ibex, Asiatic black bear, Himalayan brown bear and the very rare snow leopard. Another rare species is the completely blind Indus River Dolphin, of which approximately 1100 are believed to survive, protected in the Indus River Dolphin Reserve in Sindh. In recent years the number of wild animals killed for the trade in skins and furs has led to the establishment of a new law banning their killing and the creation of numerous wildlife sanctuaries and game reserves. Since then, the number of hunters has declined considerably.