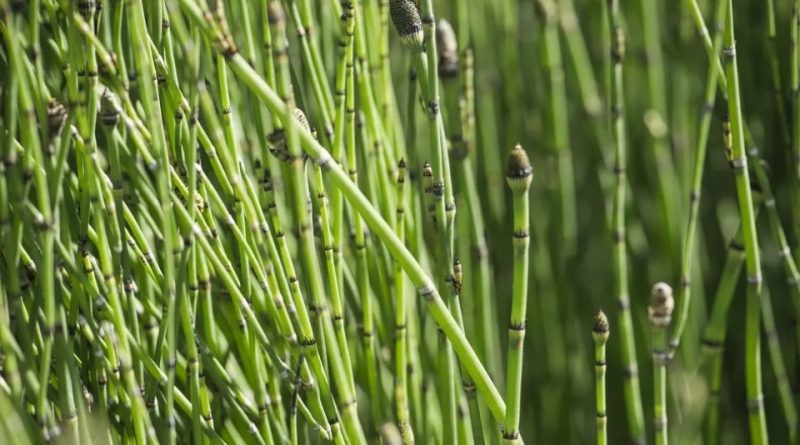 The Rough horsetail (Equisetum hyemale L.) is a fern belonging to the Equisetaceae family.

Etymology –
The term Equisetum comes from the genitive of equus horse and from sétum setola, horsehair: reminiscent of the hair of the horse tail.
The specific hyemale epithet comes from hi Thems winter: winter, for the flowering or growing season; alternative form and valid for hiemalis.

Geographic Distribution and Habitat –
Equisetum hyemale is a plant native to the entire Olarctic Kingdom and we find it in North America, Europe, and northern Asia.
Its habitat is that of shady banks, mesic environments, often in sandy or gravelly areas. It is found mainly in riparian areas of rivers and streams where it can withstand seasonal flooding. It is also found around springs and infiltrations and may indicate their presence when they are not flowing. Other habitats include moist forests and wooded openings, shores of lakes and ponds, ditches and swamps and swamps.
It grows from sea level up to 2,530 meters above sea level. 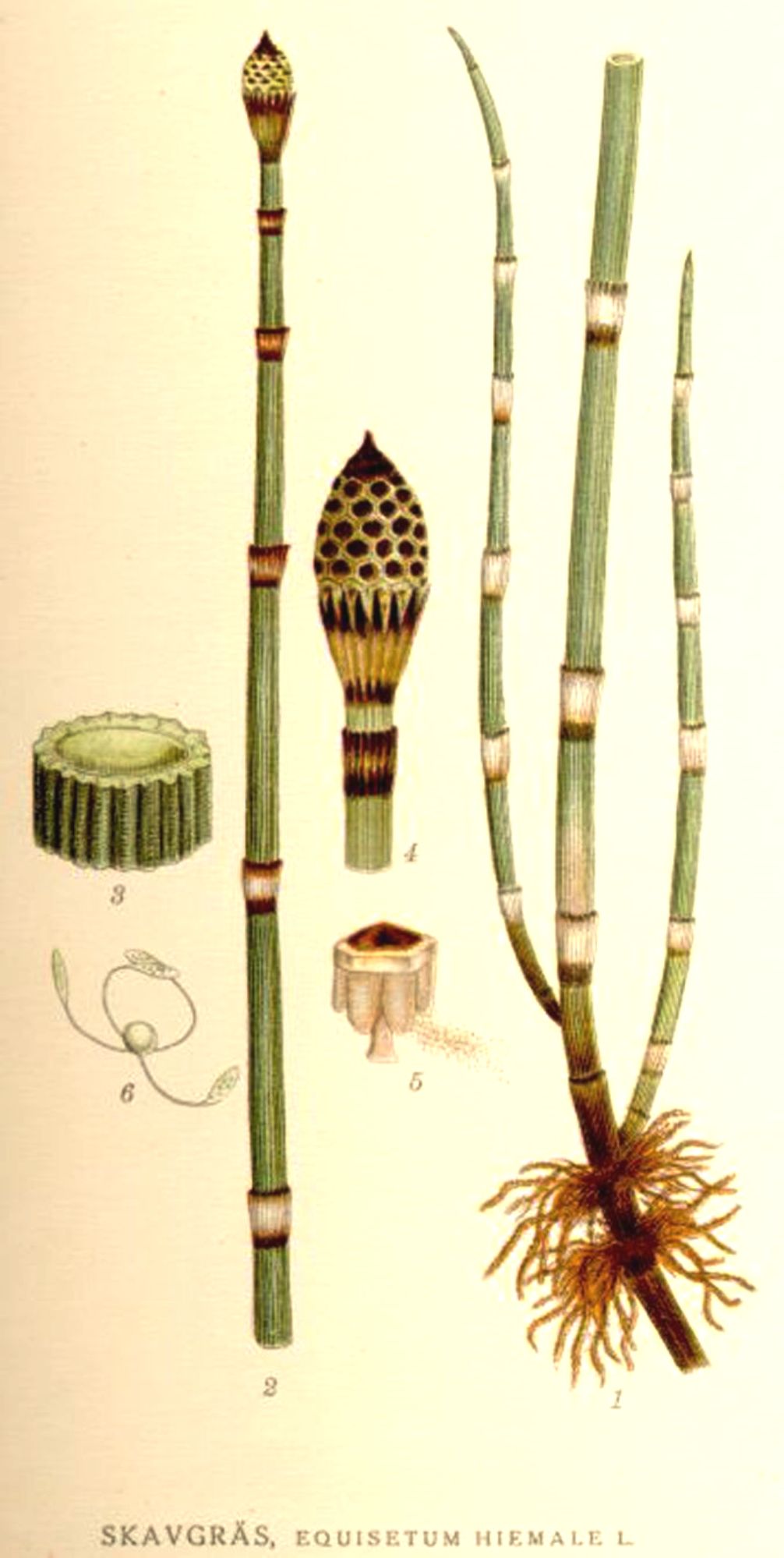 Description –
The Rough horsetail is a perennial herbaceous vascular plant with reed-like vertical jointed stems, medium to dark green in color.
The hollow stems are up to about 0 feet (0.9 m); these are rarely branched. The same stems have vist crests, which are impregnated with silica that makes them rough and hard.
The stems are generally deciduous in cold climates and remain during the winter in warmer climates. It forms dense and widespread colonies in areas with partial insolation.
The tiny leaves are joined together around the stem, forming a narrow black-green band or sheath at each joint.
As with other ferns, the plant reproduces by spores and does not produce flowers or seeds.
The spore production period is in late summer.

Cultivation –
Rough horsetail is a plant that prefers moist soil with a pH of 6.5 to 7.5. Withstands temperatures of about -30 ° C (-30 ° C). It is also a very slow growing plant.
Plants have a deep, penetrating root system and can be invasive. If grown in the garden they are best kept in perimeter areas by planting them in a large container that can be sunk into the ground.
The propagation takes place by spores that must be collected as soon as they are ripe in spring and sown immediately on the surface on a sterile compound. This must be kept moist and transplanted in pots as soon as the plants are large enough to be handled.
Plants usually spread very freely however when well positioned and should not really need any assistance.
Equisetum hyemale is often grown as an ornamental plant and is used in contained and potted flower beds and planters. Its vertical bearing makes it preferable in narrow planting spaces between walkways and walls and on small balconies.
It is also used as a plant in garden ponds and ornamental pools and other water features, planted in submerged pots.
Remember that this plant can be invasive and spreads very aggressively by underground runners, reaching pavements and garden walls. For this reason, in some cases, it is necessary to create anti-root barriers or large recessed planters that facilitate containment in gardens.
In South Africa and Australia, this plant is an invasive species of moist natural habitats.

Customs and Traditions –
Equisetum hyemale, also known as rough ponytail, abrasive rush, garbage ponytail and, in South Africa, snake grass, is an ancient plant, existing on earth as early as 350 million years ago.
Stems of this species were once exported in quantities to Britain, from Holland, so that they could be used as an abrasive to clean pots and pans.
Horsetails have an unusual chemistry than most other plants; they are rich in silica, contain various alkaloids (including nicotine) and various minerals.
The plant contains polyphenolic flavonoids with bactericidal activity and equisetic acid.
It also contains the enzyme thiaminase, a substance that can deprive the body of the vitamin B complex.
In small amounts, this enzyme does not cause problems with people who follow an adequate diet rich in vitamin B; large quantities can cause serious health problems. The enzyme is destroyed by heat or complete drying, so cooking the plant will remove the thiaminase.
The plant is antitumor, anti-inflammatory, antispasmodic, diaphoretic, diuretic, expectorant, febrifuge, haemostatic, hypotensive, and haemostatic.
It also has a stimulating effect on appetite.
Sterile stems are used, which are most active when fresh but can also be dried, and sometimes ashes are used.
The plant is a useful diuretic when taken internally and is used to treat kidney and bladder problems.
A decoction applied externally will act as a hemostatic for wounds and promotes healing.
Among other uses, it should be remembered that, in the past, the stems, which are very rich in silica, were used to degrease and polish metals.
Furthermore, the infused stems are an effective fungicide against mold, mint rust and rose mycosis.
The plant can be used as a hair rinse to eliminate fleas, lice and mites.
With this horsetail, from the stems, a light pink dye is obtained.
The hollow stems were used as whistles.
Dry stems are used to shape the reeds of instruments such as clarinets or saxophones.

Preparation Mode –
Rough horsetail has long been used for both food and medicinal purposes.
Some highland Indian tribes boiled the stems to make a drink used as a diuretic and to treat venereal diseases. It is also used as a homeopathic remedy.
A further report states that the peeled stems of the plant’s base, roots, and tubers were eaten raw by North American Indians.
Boiled and dried Equisetum hyemale is used in Japan as a traditional polishing material, similar to fine-grained sandpaper.
Strobili (fertile shoots present in spring) are cooked and used to replace asparagus. For the reasons described above, caution is advised in their use.
They are however a source of starch.