The alpine shrew (Sorex alpinus Schinz, 1821) is a mammal belonging to the Soricidae family.

Geographic Distribution and Habitat –
The alpine shrew is currently widespread on the Alpine arc, in the Balkans and in the Carpathians, as well as with isolated populations on the Sudetenland, Tatra, and Jura: the populations of the Pyrenees and the Harz mountains are probably extinct. In Italy, the species is spread along all the border areas and in the Pre-Alps.
Its habitat is that of humid environments at altitudes above 300 m: it is found in wooded areas rich in rocks, but at low altitudes it takes refuge in the valleys near streams, while at high altitudes it prefers meadows, always rich in rocks and ravines. 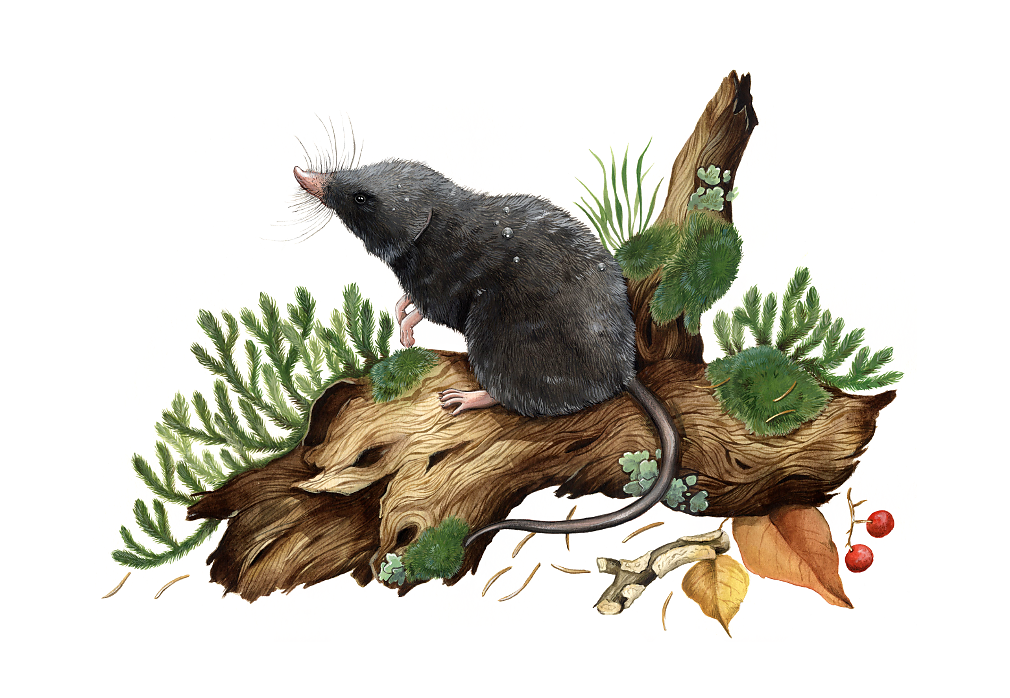 Description –
The Sorex alpinus is a small insectivorous mammal with a head-body length of 6.2-7.7 cm, a tail length of 6.2-7.5 cm, for a weight that varies between 6 and 12 grams.
It is recognized for having the back and belly of a uniformly gray-blackish color with thick hair and a very shiny appearance.
The legs and the underside of the tail, which is very long, are white. The tips of the teeth are red-brown.

Biology –
In the alpine top the breeding season goes from April to September; period in which the female gives birth to two to three litters. The pregnancy period lasts from 13 to 20 days, at the end of which the female gives birth to 6-8 young; these open their eyes from the second week of life and are weaned around 3 weeks of age.
Sexual maturity of individuals is reached after 3-4 months.
The life expectancy of these animals in captivity is about one and a half years.

Ecological Role –
Sorex alpinus is an animal with mainly solitary and catadromous habits, as it is active both day and night. It is a species that moves very fast and nervous and moves continuously sniffing the air, climbing and swimming.
For its shelter, it tends to dig tunnels which, often, it can find in the burrows of other small mammals, which it drives out or kills, rarely cohabiting there; however, it usually builds its nest in a sheltered place above the ground, such as among the roots of trees or in similar places.
This small mammal feeds mainly on insects and their larvae, which it finds in the undergrowth and among the mosses, as well as snails and small vertebrates; it is also not rare that it feeds on seeds.
According to the IUCN, this mammal is threatened by some factors such as: deforestation and the destruction of small watercourses such as streams and small rivers that can represent threat factors (G. Amori in Spagnesi & Toso 1999). Another threat factor is represented by the destruction of the habitat caused by tourism (European Mammal Assessment Workshop, Illmitz, July 2006).
Among the conservation measures it is recalled that the Sorex alpinus is included in the appendix III of the Bern Convention. Species not huntable according to the Italian law 157/92. It is necessary to monitor populations (European Mammal Assessment Workshop, Illmitz, July 2006). Near Threatened by the European Mammal Assessment (IUCN 2008).