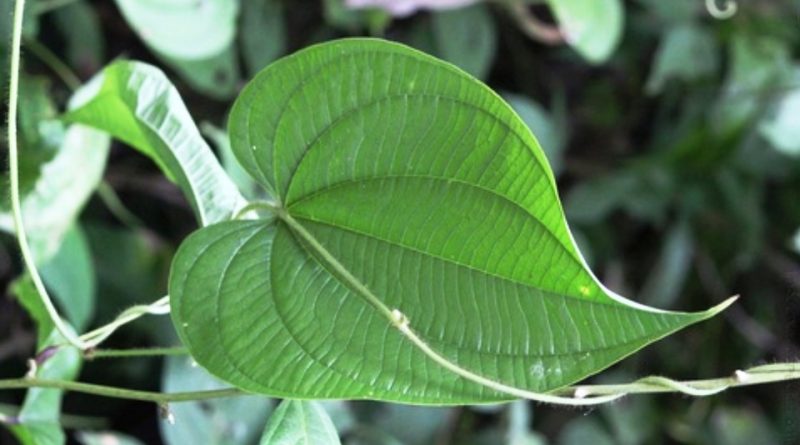 Etymology –
The term Dioscorea of the genus was dedicated to Pedanius Dioscorides Anazarbeo (of Anazarbo Asia Minor), doctor of Greek culture, botanist and pharmacist, who lived in the first century AD.
The specific composite epithet comes from Lat. composĭtus, p. pass. to compose ‘compose’ because of its botanical characteristics.

Geographic Distribution and Habitat –
Dioscorea composita is a plant with origins in Central America, in an area that includes Costa Rica, El Salvador, Honduras, Guatemala, Belize and Mexico.
Its natural habitat is not known. 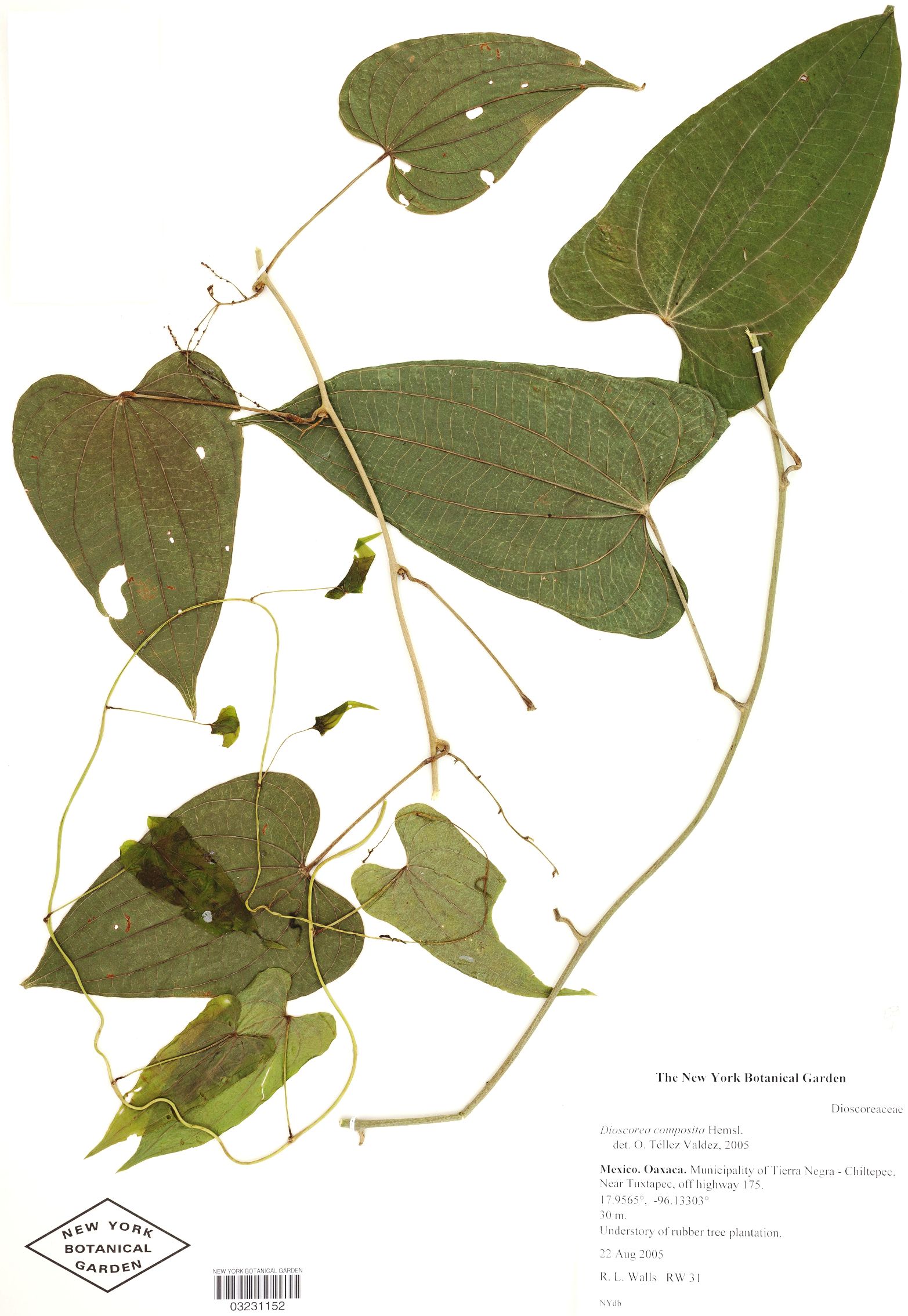 Description –
Dioscorea composita is a climbing perennial herbaceous plant that produces annual stems that grow from a tuberous formation.
The stems climb up to the ground or twist into neighboring plants.
The plants produce aerial tubers that are tightly attached to the stems, near the attachment of the leaves.
The leaves are long petiolate, opposite (often with a single persistent leaf); blades up to 20 cm or more in length, strictly in the shape of an elongated heart.
It is a dioecious species, with both male and female plants.
The flowers are small, occasional, male and female arising from the leaf axils on separate plants.
The fruit is a capsule.

Cultivation –
Barbasco is a typical plant of the humid and subtropical tropics where it grows best in areas where annual daytime temperatures are between 25 and 30 ° C, but can tolerate temperatures between 15 and 38 ° C. The plant cannot bear temperatures below 8 ° C.
It also prefers an average annual rainfall of between 1,200 and 1,500 mm, but tolerates between 1,000 and 2,100 mm. It prefers a position in full sun, tolerating light shade and develops well in light to medium soil of moderate fertility where it prefers a pH between 6 and 6.5, tolerating 5.8 – 7.3.
Once the tubers are formed, they take 4-5 years to reach their maximum size.
Propagation can take place by parts of tubers or by seeds.

Customs and Traditions –
Composite Dioscorea is a plant native to Central America and widespread throughout South America.
The tubers of this plant, before being used industrially, were used by Chinantec healers in the north of Oaxaca as an abortion and in the treatment of painful joints. They were also used by chinantecs as a poison for fishing in the Papaloapan River, and are also mentioned in a use for this purpose in the Popol Vuh, the sacred book of the Mayan K’iche.
Dioscorea composita is a plant that stands out for its role in the production of diosgenin, which is a precursor for the synthesis of hormones such as progesterone and cortisone.
The tubers have medicinal properties and are sometimes harvested in their natural state for local use. The plant is however sometimes cultivated.
Its root contains particular biologically active substances, steroid saponins, which are part of the plant’s defensive system.
Diosgenin is the saponin most represented in Dioscorea and has interesting effects as a female hormonal regulator, antispasmodic and anti-inflammatory, particularly useful for menopause and premenstrual syndrome.
In recent decades, some of the pharmacological effects of Dioscorea that tradition had already identified in the past have been confirmed.
Dioscorea also shows anti-inflammatory effects useful in joint inflammation.
In the 1960s, diosgenin extracted from composite Dioscorea was instrumental in the development of the oral contraceptive pill and also in the development of cortisone-based treatments for arthritis. Studies on diosgenin indicate that it has an effect on diabetic neuropathy.

Preparation Method –
The root of Dioscorea composita has been used, since ancient times, for medicinal purposes and this as far as is known today, that is almost certainly for the content of diosgenin present in the roots, which, as mentioned, is a precursor of some female hormones and it is extracted for pharmaceutical use.