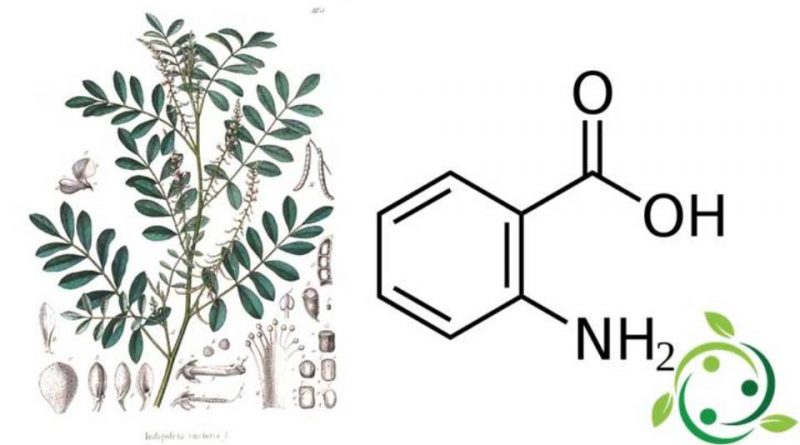 The resulting sodium salt of phthalamic acid is decarbonylated by a Hofmann rearrangement of the amide group, induced by hypochlorite:

A related method involves treating phthalimide with sodium hypobromite in aqueous sodium hydroxide, followed by neutralization.
In the days when indigo dye was obtained from plants, it was degraded to give anthranilic acid.
In fact, anthranilic acid was obtained for the first time from the degradation induced by indigo bases.
At the biochemical level, anthranilic acid is biosynthesized starting from chorismic acid. In organisms capable of synthesis of tryptophan, anthranilate is a precursor of the amino acid tryptophan, through the attachment of phosphoribosyl pyrophosphate to the amino group.
On an industrial level, anthranilic acid is an intermediate in the production of azo dyes and saccharin.
It and its esters are used in the preparation of fragrances that mimic jasmine and orange, pharmaceuticals and products that absorb UV rays, as well as metal corrosion inhibitors and mold inhibitors in soy sauce.
In addition, some insect repellents, based on anthranilate, have been proposed as substitutes for DEET (Dietiltoluamide).
Anthranilic Acid is an amino acid and acts as a coenzyme in the production of breast milk. It therefore represents a metabolite of Tryptophan, another important amino acid crucial for the well-being of the neuropsychic system and its maintenance in health.
Since it performs the function of coenzyme in the production of breast milk, it is therefore also called vitamin L according to an obsolete nomenclature of vitamins.
In fact it was once thought that anthranilic acid was a vitamin and in that context it was called vitamin L1, but it is now known that it is not essential in human nutrition.