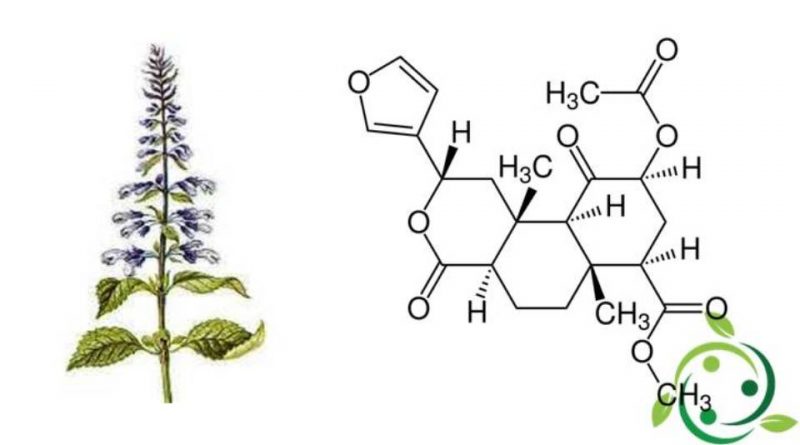 Salvinorin A, whose term in the official IUPAC nomenclature is: methyl- (2S, 4aR, 6aR, 7R, 9S, 10aS, 10bR) -9- (acetyloxy) -2- (furan-3-il) -6a, 10b -dimethyl-4,10-dioxododecaidro-2H-benzo [f] isochromene-7-carboxylate is a neoclerodane diterpenoid with brute or molecular formula: C23H28O8.
Physically it is soluble in organic solvents such as ethanol or acetone, less in water.
This molecule is produced in nature exclusively in Salvia divinorum (Salvia divinorum Epling & Játiva, 1962).
Salvinorin A is a molecule with dissociative and psychedelic hallucinogenic effects.
Due to the lack of nitrogen atoms, salvinorin A does not fall into the category of alkaloids, unlike all the other natural psychedelics (such as bufotenine, mescaline, psilocybin etc.) and to many semi-synthetic psychedelics (such as LSD).
To date, although its synthesis in the laboratory is possible, it is less expensive to extract it from the plant.
From a biochemical point of view, salvinorin A is an agonist of κ-opioid receptors and, recently, a moderate affinity for some dopamine receptor subtypes has been discovered, unlike the other psychedelics, whose action is mainly mediated by their properties agonists against serotonin 5-HT2A receptors.
This substance is psychoactive in doses of just 200µg, making it the most powerful natural hallucinogen known.

Salvinorin A does not exhibit particular toxicity even at high doses although the risk of an experience characterized by deep terror and dysphoria is present with each intake. These crises, called in bad jargon, are almost always temporary. If the individual already had latent psychic pathologies, there is a risk of slatentisation (i.e. the manifestation of even latent pathological states).
The use of this substance was soon regulated in various states.
Australia was the first nation in the world to ban the use of Salvia divinorum and salvinorina A, with a law that entered into force on June 1, 2002.
In Spain, in 2004 the Ministry of Health decreed the sale of Salvia divinorum or extracts containing salvinorin A illegal, while no regulation for use or possession is mentioned.
In the Netherlands, the sale, purchase and possession of Salvia divinorum or extracts containing salvinorin A are not subject to limitations, available in any smart shop on Dutch territory.
In Estonia, Norway, Iceland and Finland it is authorized for therapeutic use under medical prescription.
In Italy in the years prior to 2005, both salvinorin A extracts and dried leaves of the plant were regularly sold in smart shops. Since 2005, the Ministry of Health, in the Official Gazette No. 54 of March 7, 2005, has added the plant and its active ingredient (salvinorin A) to the list of prohibited substances, following the assessments of the Istituto Superiore della Sanità.