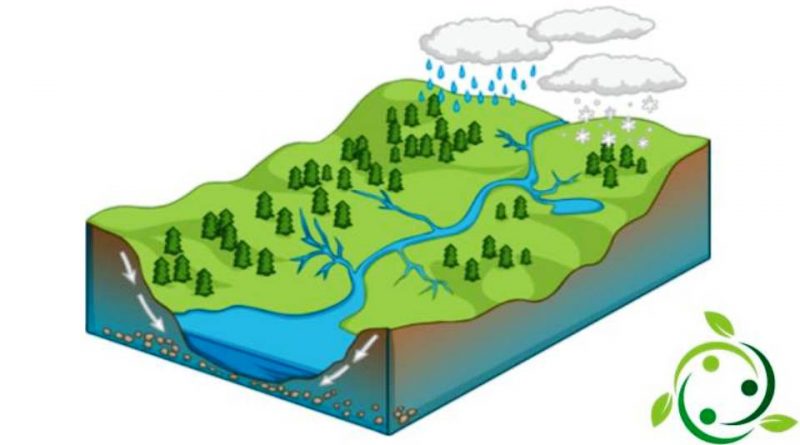 The term hydrographic basin, or even river basin or catchment basin, means a section of territory within which the waters flow into a stream that can be torrential or fluvial.
The limits of a basin are defined by the watershed line, which coincides with the ridge line of the mountain ranges.
The shape and size of an ideographic basin are generally determined by the geological characteristics of the area, while the branching of the ideographic network, i.e. the density of the smaller waterways, also depends essentially on the regime of precipitation, the types of soil and of vegetation and, increasingly, also from human activities.
In the water catchment area, the portion of the territory whose waters, due to the distribution of the slopes, flow towards the sea, is called the exoreic zone.
However, there are also endorheic and areic areas.
In endorheic areas, surface waters end in lagoons or inland lakes not connected to the oceanic system, or disappear underground. Examples of these areas are the large North American or Central Asian inland basins (the Caspian Sea system, the Aral Sea in Asia, the Jordan-Dead Sea in Israel, many of the tectonic lakes of South-East Africa) and the karst systems (Trieste Karst, Piani del Gran Sasso, Apulian and Lucanian Murge), where surface waters percolate into the subsoil where they feed a hypogean (i.e. underground) hydrographic network.
In the areiche areas, however, there is no hydrographic network; the sliding on the surface is absent, except in the rare moments of precipitation (for example the deserts).
The size of the river basins can vary from a few km2 up to large basins, such as that of the Amazon River which covers an area of ​​7 million km2.