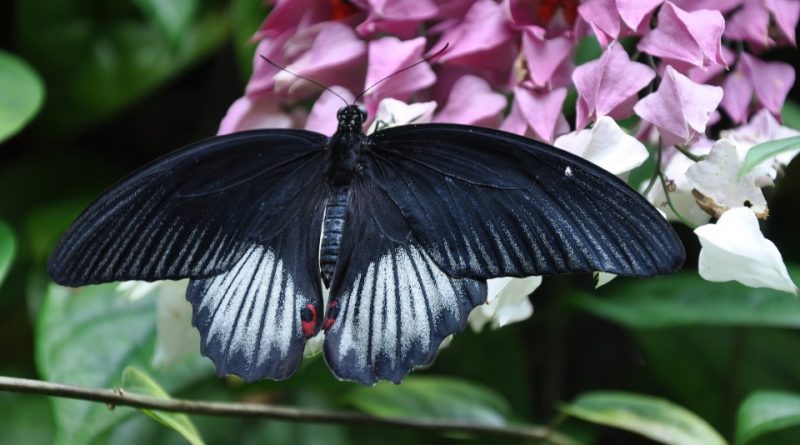 The great Mormon (Papilio memnon Linnaeus, 1758) is a large moth belonging to the Papilionidae family.

Geographical Distribution and Habitat –
The Great Mormon butterfly is a large moth originating in Asia where it lives in a range that includes: North-eastern India (including Sikkim, Assam and Nagaland), Nepal, Bangladesh, Burma, Nicobar Islands, Andaman Islands, Western, Southern and Eastern (including Hainan), Taiwan, Southern Japan, Ryūkyū Islands, Thailand, Laos, Vietnam, Cambodia, Malaysia and Indonesia (Sumatra, Mentawai Islands, Nías, Batu Islands, Simeulue Island, Bangka Island, Java, Kalimantan and Sunda Minor Islands).
This species flies up to 2,100 meters in the Himalayas, but is more common in other areas at low altitudes and is found in forest clearings. It is very common and is also seen among human dwellings and visits the flowers of Poinsettia, Jasminum, Lantana, Canna and Salvia.

Morphology –
Papilio memnon is a moth that includes thirteen subspecies, with the female being polymorphic and presenting mimetic forms.
It is a butterfly with a wingspan of 120 – 150 millimeters.
It has four male and female forms, the females are highly polymorphic and many imitate unpleasant butterflies. This species has been extensively studied to understand the genetic basis of Batesian polymorphy and mimicry. Up to twenty-six female forms have been reported.
In the typical form, the male has no tail with a color ranging from dark and intense blue to black. It may or may not have a red stripe in the proximal part of the front wings.
The female is tailless, with the upper part having a sepia color as the background color and streaked with grayish white. The third basal part is red and is characterized externally with white. The upper back is blue black and has five to seven yellow or white disc spots.
Feminine form Butleriana:
– it has no tail, similar to the typical male, with both dark sepia wings. The front has a white area on the inner margin. The rear is blue.
Female form Alcanor:
– in this form, the female has yellow sides of the abdomen. Above there is a grayish brown color with black veins and streaks. The cell is red at the base. It also features a velvety black patch on the bases of veins 1 and 2 of the upper part of the thigh. The reverse of the upper part is black with part of the white cell and also has white stripes around it. The rear corner of the wing is red with a large black spot. There is a row of red end points inside the vein.
Male and female Polymnestoroid forms:
– are presented without a tail. The male is recognized as having the lower and proximal parts of the upper wings with short blue stripes. The female has the upper proximal part of the sepia-colored wings with light gray streaks between the veins. The base of the cell is red. The back is velvety brown with a blue disc area and has black spots, similar to the blue Mormon butterfly (P. polymnestor), which, in fact, imitates.
The larva recalls that of the common Mormon (P. polytes), being green in color with whitish marks.

Aptitude and biological cycle –
Papilio memnon, as mentioned, is a polymorphic moth, with the larvae that feed on a good number of plants including: Fortunella, Poncirus, Severenia, Atalantia, Paramygnia, Toddalia, Xanthoxylum, Citrus, Magnolia, Michelia (Magnoliaceae) and Aristolochia (Aristolochiaceae).
Males sometimes absorb moisture at ground level but both sexes are most commonly spotted when they feed on nectar on flowering bushes.

Ecological role –
Papilio memnon is a butterfly that usually flies 2 to 4 meters above the ground and is known for frequenting muddy pools. Males are much more common than females. The female forms of Butleriane and Alcanor are particularly rare.
The larvae of this moth are heavily parasitized.
From an ecological point of view, this species is common and not endangered as citrus crops throughout South Asia offer an abundance of plants to feed on.