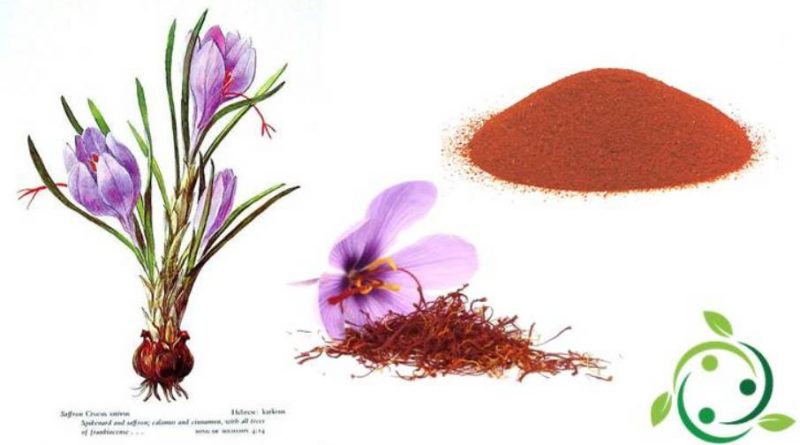 Saffron is a spice obtained from the stigmas of the true saffron flower (Crocus sativus L.), a plant of the Iridaceae family.

Description –
Saffron is a spice that comes from a herbaceous species, namely the Crocus Sativus which blooms in autumn. In the corolla of the flower there are three stigmas which are red or orange in color and it is from these that saffron is obtained.
The plant, which is never higher than 25 cm, is rigorously picked by hand. Once the flowers have been collected, the stigmas that must subsequently be dried are delicately detached.
A kilo of spice takes about one hundred and twenty thousand flowers. For this reason saffron pistils cost at least 12,000 euros per kilo. Depending on the varieties of bulbs and climates, the flowers are harvested between October and November.
Once the stigmas have been detached from the flower, these must be placed in a sieve for drying, which occurs through an always moderate heat source. It is at this point that saffron in pistils and saffron in powder are born, to be used in first courses, in sauces, in ragu, in vegetable side dishes, in a tasty soup, with cheeses and even in desserts.

Active principles –
The aroma of saffron and a smell similar to hay and iodoform and are due to the picrocrocin and safranal molecules. It also contains a carotenoid pigment, the crocin, which gives the dishes and fabrics a golden-yellow hue
Saffron contains more than 150 volatile and aromatic compounds and also has various non-volatile active compounds, many of which are carotenoids, among which we mention zeaxanthin, lycopene and α- and β-carotene. The golden yellow-orange color of saffron, however, is mainly due to the α-crocin, the trans-crocetin and di- (β-D-gentiobiosyl) ester, having the IUPAC name: 8,8-diapo-8 acid , 8-carotenic. This means that the crocin at the base of the saffron aroma is a digiobiotic ester of the crocetine carotenoid. The crocins themselves are a series of hydrophilic carotenoids, polyethylene esters of crocetin or monoglycosyl or diglycosyl. Crocetin is a conjugated polyene dicarboxylic acid that is fat soluble, being hydrophobic. When crocetin is esterified with two gentobiose molecules, a water-soluble sugar, the product is also water-soluble. The resulting α-crocin is a carotenoid pigment that can make up more than 10% of the mass of dry saffron. The two esterified gentobiosis make the α-crocin ideal for coloring water-based and non-lipid dishes, such as rice dishes.
In addition, bitter glucoside picrocrocin is responsible for the taste of saffron. Picrocrocin (chemical formula: C16H26O7; IUPAC name: 4- (β-D-glucopyranosyloxy) -2,6,6- trimethylcyclohex-1-ene-1-carboxaldehyde) is the union of an aldehyde subunit known as safranal (name systematic: 2,6,6-trimethylcyclohexa-1,3-diene-1-carboxialdehyde) with a carbohydrate. It has insecticidal and pesticide properties and can make up to 4% of dry saffron. Picrocrocin is a truncated version of the carotenoid zeaxanthin produced through oxidative cleavage and it is also the glyphoside of the safranal terpene aldehyde.
When the saffron is dried after harvesting, the heat and the enzymatic action divide the picrocrocin into D-glucose and a free safranal molecule. Safranale, a volatile oil, gives saffron much of its characteristic aroma; it is less bitter than picrocrocin and in some assays it can make up to 70% of the volatile fraction of dry saffron. Another determining element for the aroma of saffron is 2-hydroxy-4,4,6-trimethyl-2,5-cyclohexadien-1-one, which when dried like hay, produces a perfume described as that of saffron. Chemists believe that this has the strongest influence in determining the scent of saffron, despite its quantitatively less presence than safranal. Dry saffron is very sensitive to pH fluctuations and its chemical bonds quickly break in the presence of light and oxidizing agents. For this reason, it must be kept in airtight containers, to minimize contact with atmospheric oxygen.
From the point of view of the chemical composition, saffron is rich in vitamins that activate the metabolism and is therefore digestive. It therefore contains many vitamins (A, B1, B2 and C) and minerals (in particular phosphorus, calcium, sodium, iron, potassium, magnesium and manganese) and above all, as mentioned, it has a very high concentration of carotenoids such as zeaxanthin and lycopene.
For its carotenes content (8%, 1000 times that of carrot) it is one of the most powerful natural antioxidants. Saffron therefore fights free radicals, responsible for cellular aging.
Saffron stigmas is composed of approximately 65% ​​carbohydrates, 12% water, 9% protein, 5.8% fat, 5% ash, 4% fiber. It is a caloric food (it contains about 310 calories per 100 grams) but this is a figure of little interest since it takes a minimum dose.
Saffron is however rather heat resistant.

Preparations –
Pure saffron in pistils should be kept in a dark, cool and dry place. It does not go bad but it is recommended to consume it within 2 years from the date of collection to preserve the aroma and nutritional qualities of the spice.
Also pay attention to the humidity which can ruin saffron irreversibly.
If you store the stigmas in an airtight container, such as a glass jar with a screw cap, better than the cork in keeping the humidity away, saffron can be kept for up to three or four years. Being a dried spice it hardly goes bad and is a very long-term product but over the years it gradually loses its flavor and nutritional qualities.
Over time, saffron matures and develops a bittering effect due to the effect of pyrocrocin, aging slightly increases the bitter taste. In general, the best aroma is achieved two or three months after drying and is maintained for at least a year. Saffron is harvested once a year between October and November and is ready for sale by December.
Many use saffron powder more often because they believe it is easier to use than pistil. This is probably true, but with some foresight it is easy to obtain great results even with this type of saffron which releases a very intense aroma.
In order to use pistils in recipes, it is necessary first of all to find them in a bowl filled with hot water. The soaking time must not be less than 40 minutes and in addition to water, you can also use milk, cream or vegetable broth. Do not overdo the amount of liquid, about 40 ml (one cup) is enough, paying attention also to the temperature of the infusion which must not be excessive. Letting the saffron pistils recover in water means allowing its aroma and intense color to release.
Once this time has passed, the saffron in pistils joins the dish together with its infusion liquid giving the food its characteristic delicious and pungent flavor.
The pistils of a quality saffron must have an intense aroma and must be subtle and uniform, both in size and color, which must be intense red. One end must be curled and orange in color, the other must have a trumpet shape. If the curled end were yellow, it would be a lower quality saffron.
Always remember that the important taste of saffron can be controlled by correctly balancing the quantities. You will always be in time to add more, but if you exceed, the result could be a dish with a bitter aftertaste.
As mentioned, saffron is also used in powder form and it is often possible to find on the market, in addition to sachets of pure saffron, also saffron, which is less valuable and is cut with turmeric or safflower.
Saffron powder has a milder flavor than pistils and the right amount to use if you prepare a lunch for about 8 people is ¼ teaspoon. There are many recipes that use saffron powder, starting with first courses such as speck and saffron pasta up to main courses such as saffron chicken breast, quick to prepare and really delicious, baked arancini, pizza, fish and much more.