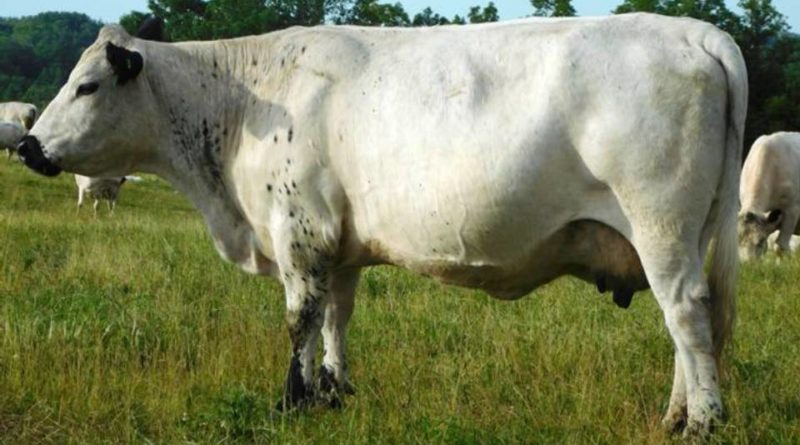 British White is a bovine breed (Bos taurus Linnaeus, 1758) originally from England with an aptitude for meat production.

Origins and History –
The origin of the British White cattle breed dates back to the 17th century when white cattle (often with black or red ears) were already very popular in Great Britain and Ireland.
At the beginning, for a few centuries, the herds of white cattle were kept as ornamental and sporting animals in closed parks.
This cattle gradually gave rise to the various cattle with a white coat.
However, British white cattle are not genetically distinct from other British breeds and therefore some doubts persist on their exact origins; in fact other breeds, such as the Shorthorn, may have contributed to the development of this breed.
Originally, the animals that spawned British White were kept in Whalley Abbey Park in Bowland Forest near Clitheroe (Lancashire). Subsequently, in the early 19th century, most of the herds were moved to Norfolk. These cattle were sold in small lots, largely to the nobility in the surrounding countryside, and this formed the basis of the British White breed. At the beginning of the twentieth century, however, these cattle had fallen to about 130 registered animals, mainly present in the eastern counties of England. By the end of the twentieth century the number had grown to over 1,500 animals registered in the United Kingdom and perhaps 2,500 in the United States, as well as many in other parts of the world such as Australia, where the breed was first imported by Mrs. A Horden in 1958.
In the UK, the Rare Breeds Survival Trust lists this breed as a “minority”.

Morphology –
British White is a bovine breed characterized by a short-haired white coat with some dark spots, usually black but sometimes red.
The variant with red colored parts is present, in the breed, for about two percent; as the red coloration is genetically recessive compared to the black color, many of the animals with black spots also carry the red color allele.
The presence of these small colored spots shows that British White originated from crosses with other pigmented coat breeds.
The colored parts are present on the ears, feet, eyelids, nose and often also nipples.
They are medium sized cattle, with a height at the withers of 125-135 cm and a compact build.

Productive attitude –
British White is a breed bred primarily for meat production. These are animals with good resistance to disease and robust resistance to the environment where it grows. They are also somewhat adaptable animals to not particularly luxuriant pastures which are often represented by vegetation such as rushes, nettles or heather; moreover in their feeding they also feed on the foliage of many trees and shrubs present along their way.
In addition, females rarely have difficulty giving birth.