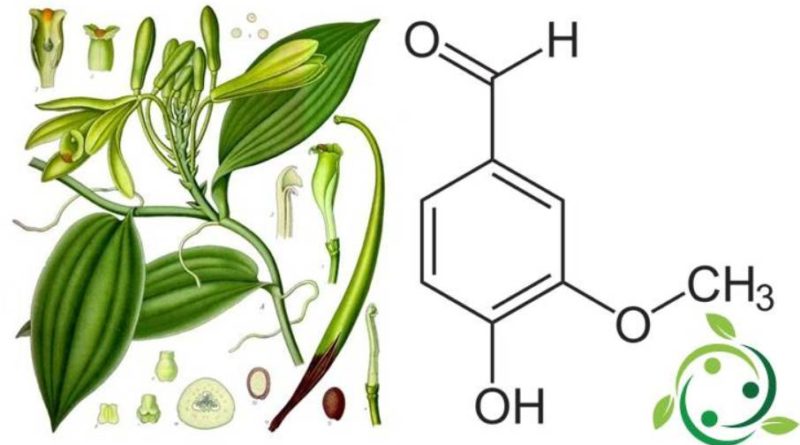 Vanillin, also known as vaniglin, whose term in the official IUPAC nomenclature is: 4-hydroxy-3-methoxybenzaldehyde, has a brute or molecular formula: C8H8O3.
Vanillin is an aromatic aldehyde which at room temperature is a crystalline solid tending to white, based on its purity, with a characteristic vanilla aroma.
Vanillin is quite soluble in water, much more soluble in ethanol (500 g / l at 20 ° C) and in the most common organic solvents.
Vanillin is an aromatic substance of natural origin, obtained from the fruits of vanilla (Vanilla planifolia Jacks. Ex Andrews, 1808), a plant that was cultivated in Central America already in the pre-Columbian era.
The plant was discovered by Europeans only in the early decades of the sixteenth century, with the conquest of Mexico by Hernán Cortés, when they saw that the Aztecs used it as an aroma for chocolate.
However, it is necessary to arrive in 1858 when Nicolas-Theodore Gobley identified vanillin as a substance in itself.
The first laboratory synthesis was made by the German chemists Ferdinand Tiemann and Wilhelm Haarmann who obtained it by producing it starting from the coniferine, soon replaced by the cheaper eugenol, and then from the guaiacolo.
Synthetic vanillin is currently used more often than natural vanilla extract as a flavoring in food, drinks and pharmaceutical products.
Vanillin is contained in the seeds of the vanilla plant in a percentage that ranges between 1.5% and 4%. Natural vanilla extract contains a mixture of several hundred compounds in addition to vanillin. The synthetic product differs from that of natural origin by a greater probability of finding deuterium or great-uncle between methoxyl and carbonyl on the carbon of the ring.
The aroma of vanillin is widely exploited by the confectionery industry (especially in the production of ice cream and chocolate), cosmetics and pharmaceuticals (both as a corrective excipient of flavor and as a basic molecule for the synthesis of other substances).

Like many other substances of plant origin, vanillin is not found in nature as such; rather, it is present as an aglycone within glucoside molecules.
This link between vanillin and glucose, which also prevents the perception of the typical vanilla aroma, is split off at the death of the fruit by hydrolytic enzymes.
This reaction is modulated by man through the initial maceration of the pods in hot water, which has the purpose of stopping the biochemical processes that take place in living plant tissues; after which, for a couple of weeks, the fruits (flattened pods, 15-20 cm long and 8-10 mm wide) are dried in daylight, and wrapped in woolen cloth at night, where they are left to exude inside of airtight boxes.
In this phase the glucosidic bonds are split by enzymatic hydrolysis, with the release of vanillin in free form; it follows a final drying process to stop the enzymatic processes, which in turn precedes a final period of longer or shorter aging.
These traditional, rather slow, production processes justify the significantly higher cost (about 100 times) of natural vanillin compared to synthetic vanillin, which currently covers most of the commercial requests.
The main producing countries of natural vanillin are obviously those in which vanilla finds the ideal climate for its growth: Mexico, Madagascar, Indonesia, China, Tahiti and tropical wetlands in general.