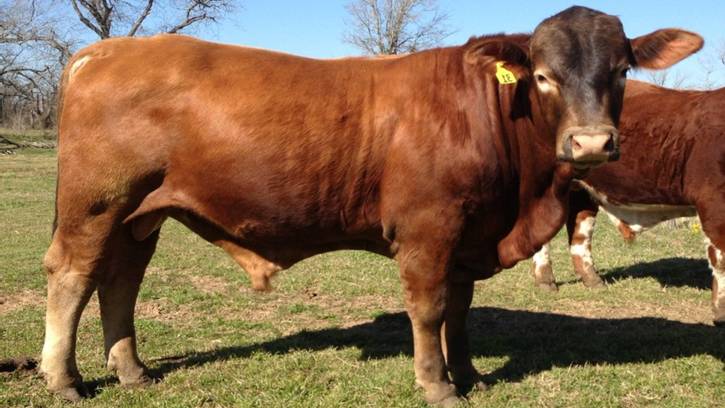 Brahmousin is a bovine breed (crossbreed Bos taurus L. and Bos taurus indicus) originating in the United States, with an aptitude for the production of meat.

Geographical and Area Distribution –
The Brahmousin breed is a breed widespread both in America, especially the United States but also somewhat widespread in tropical and sub-tropical countries.

Origins and History –
Brahmousin is a mixed breed of cattle, obtained by crossing Brahman zebu with Limousine breeders.
This breed was created in the late 1970s by Daryl Wiggins in Texas. The first crossings were obtained through a transfer of multiple embryos from Limousine reproducers, imported from France. From these there were six heifers and three calves that formed the starting point. These in turn were crossed with the Brahman cattle, obtaining F-1 and with further subsequent crossings, on a wider basis, which led to the breed which is Limousine for 5/8 and Brahman for 3/8.
The goal was to best blend the characteristics of Limousines and Brahmans.
Thus a breed has been created that has excellent reproductive efficiency, good maternal ability, excellence in muscular and growth traits and adaptable in different environmental conditions.

Morphology –
Brahmousin is recognized for its generally golden red coat, while the legs, around the eyes, the muzzle (which can however be pigmented depending on the prevalence of blood) and the belly are of a lighter shade.
The skin is slightly loosened like Brahman.
It is also a large breed with a strong structure and a robust conformation.
The bulls are robust, strong, fertile and are excellent breeders.
Females are long-lived and fertile.
The height at the withers varies between 130 and 150 cm.
Generally they are acorns.

Productive attitude –
Brahmousin is a bovine breed typically for the production of meat also because they are extremely fruitful and productive animals, so much so that they are very bred in the countries where they have established themselves.
In addition, this breed has great resistance to hot climates, insects and excellent efficiency in food processing and muscle conformation.