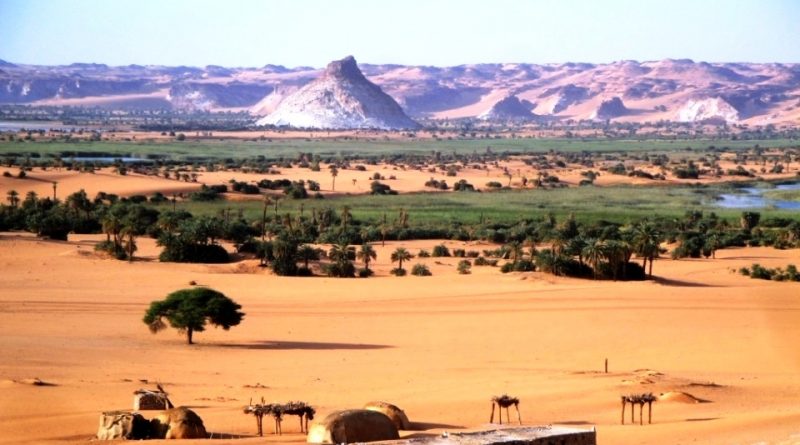 Chad, officially the Republic of Chad, is a state in the central part of Africa that borders Libya to the north, Sudan to the east, Cameroon and Nigeria to the southwest, Niger to the west and the Central African Republic to the south.
Chad is an extended state of 1,284,000 km² and has a population of approximately 11,500,000 inhabitants who speak the official French and Arabic languages.
The capital of Chad is N’Djamena.
The territory of Chad extends from the Tropic of Cancer up to 7 ° 30 ‘north of the equator, practically in the center of northern Africa and has a very particular morphology.
This state, in fact, is characterized in the north-western area by the massive Tibesti massif, dominated by the large volcanic relief of the Emi Koussi which has a height of 3,415 m.
This massif, the site of intense volcanic activity, with the emission of rhyolithic or basaltic lavas during the Pliocene and Quaternary periods, rests on a base of Paleozoic sandstones which are in turn superimposed on a precambrian crystalline base. Here we find volcanic reliefs that go to considerable heights, such as the Pic Touside (3,265 m) and the Tarsus Emisou (3,376 m), creating in the center of the Saharan desert an environment rich in morphological and highly suggestive contrasts.
In the eastern part of Chad, which goes as far as the border with Sudan, we find vast plateaus on the arenaceous rocks of the Paleozoic period which rise to form reliefs of considerable altitude, such as the Ennedi (1,310 m), sectioned from deep valley engravings.
In the southern part of the country we find the crystalline base of the pre-Cambrian period, of medium height, which is the Guéra massif (1,800 m).
Between this elevation and the Tibesti, in correspondence with the central area of ​​Chad, a depression develops, in correspondence with the Bodélé, which is a large basin of lake origin in the past connected, through Bahr el Ghazal, to Lake Chad, of which constituted an extension.
From the hydrographic point of view, the south-western area of ​​the country is occupied by the basin of Lake Chad, a lake fed mainly by the Chari river (1600 km), which originates on the Central African ridge, and by its left tributary, the Logone, whose spring branches come from the Adamaoua plateau.
On the left side the Chari also receives water supplies from Ouham, while from the left it is fed by the Bahr Kéita and Bahr Salamat which come from the Darfur massif (Sudan).
The Batha also flows from the same mountains and flows into the riverbed of Lake Fitri.
Lake Chad has an average depth of a few meters and has an area ranging from 10,000 to 25,000 km² due to the irregularity of the food, the evaporation and the intensity of withdrawals for agricultural purposes.
Unfortunately, from 1962 to 2014, the waters dropped four meters, reducing the surface by 90%. This is due to the decrease in rainfall and the constantly increasing use of water for irrigation, taken from the lake or its tributaries, the largest of which is the Chari lagoon system. Being shallow (only 7 meters at the deepest point, with an average depth of 1.50 meters), its size is very sensitive to the change in average depth and, consequently, has strong seasonal variations.
The climatic conditions of Chad in fact reveal significant variations in the various regions but also significant fluctuations in recent decades.
In general the climate of Chad passes from the humid tropical type of the southern regions characterized by two seasons, one dry in winter and the other humid in summer, with rainfall reaching 1200 mm per year in Moundou and Sarh, to the tropical desert one of the regions northerly, with significant diurnal temperature variations and low rainfall. To the north, the wet season becomes shorter and shorter, with just 60 mm of rainfall in Faya-Largeau, until it disappears. Thus the dry season, which is mainly fueled by the typical Saharan wind, Harmattan, becomes increasingly hot and torrid until it reaches, already in April, maximum temperatures of 45 ° C. 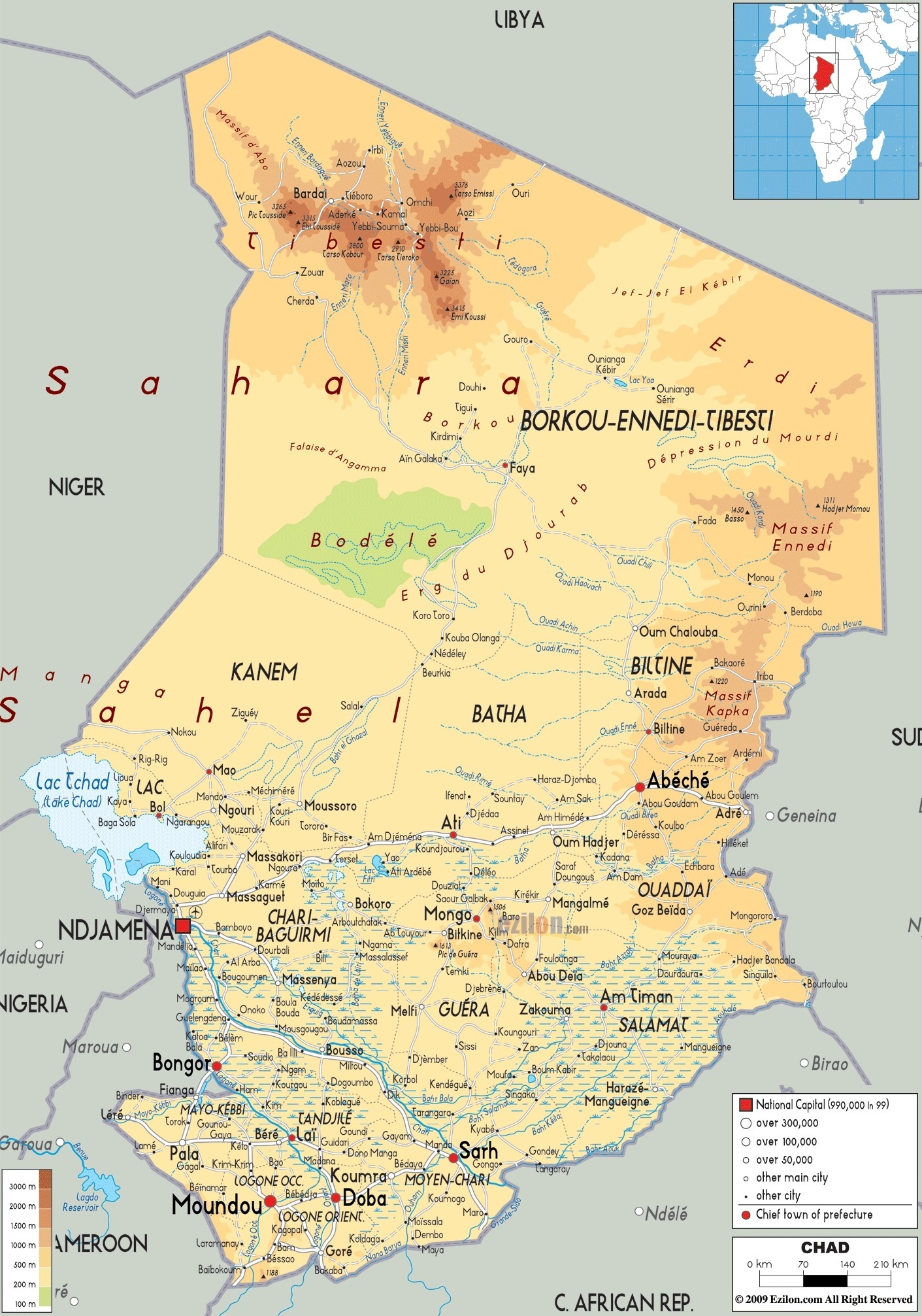 Flora –
Following the progressive drying up of the Sahara, presumably started in the post-glacial era, both the flora and fauna have undergone a shift to the south, of which Chad also retains testimony in the engravings and cave paintings of Tibesti and Ennedi, where animal species appear, depicted by the ancient inhabitants of the region, which today are found only in the southernmost part of the country.
The flora, which is mainly linked to climatic conditions, varies progressively from north to south.
So in the southernmost areas of Chad (around the 10th parallel, we find sparse forests and wooded savannas, characterized by tunnel trees along the rivers, with deciduous leaves, which is gradually followed by an area of ​​sparse savannas with acacias, tamarisks, mimosas and sometimes even the gigantic baobab and shrub formations of wild jujube, pistachio, spiny acacia, etc.
It should be noted that the forests, covering 11.4 million hectares, cover 9 percent of the territory and supply firewood (the main source of energy available) and gum arabic. Unfortunately, according to the United Nations, they fell by 12.1 percent in the period 1990-2010.
To the north, the vegetation conformations gradually change to give way to shrubs, which gradually give way to the grasses of the Sahelian belt, beaten by the nomadic breeders.
Continuing further we then pass to the desert, where the vegetation is limited to the dactyliferous palms of the oases, a spontaneous plant of the Sahara. In the less raw areas, however, there is no shortage of shrubs such as those found in the savannah.

Fauna –
The fauna of Chad is varied, numerous but also linked to the great climatic variability of the country. Numerous species of gazelles and ostriches live in the desert and in the steppes of the sahel. The most populated part and with numerous species of animals is that of the wooded savannas of the southern part.
Here the most impressive animal is the elephant, frequent in Salamat, which unfortunately is a traditional hunting area for these pachyderms.
In the past, these large mammals have suffered serious and real “persecutions” by ivory traffickers; today they are strictly protected and their killing involves the payment of a strong tax.
In this area there are still numerous giraffes and large antelopes and there are carnivores, such as lions, leopards and, more rarely, cheetahs.
In Lake Chad and rivers we find numerous quantities of fish so that fishing is one of the main activities of local populations.
Fortunately, since the last century, the state of Chad, in order to protect its country’s huge ecological heritage, has established various parks and protected areas; among these we remember:
– The Zakouma National Park, west of Am Timan and north of Sarh, extends for 300,000 hectares, crossed by the Bahr Salamat, in south-eastern Chadian, where numerous large animals also live;
– The Wildlife and Hunting Reserve of Abou Telfan, east of Mongo, established in 1955, extends for 1,100 km²;
– The Manda Wildlife Reserve, west of Sarh, established in 1969, covers 138,000 hectares;
– The Djoli-Kéra Forest Reserve west of Sarh;
– The Yamba-Berete Forest Reserve east of Pala;
– The Bédouma Forest Reserve, north of Goré
– The Lower Chari Wildlife Reserve, north-west of N’Djamena.