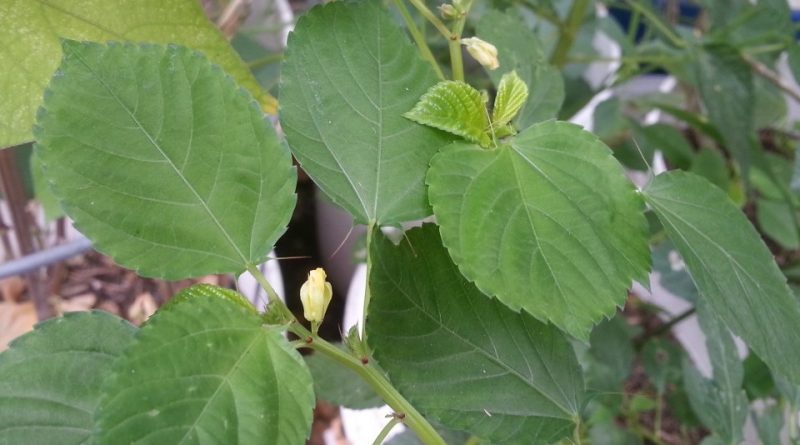 Molokhia or Jute Malva (Corchorus olitorius L.) is a shrubby species belonging to the Malvaceae family.

Etymology –
The term Corchorus comes from the Greek κoρέω koréo to sweep, sweep, nectar and, by extension, purge.
The specific epithet olitorius is in reference and relevance to the gardeners, from ŏlĭtor (or hŏlĭtŏr), greengrocer: epithet attributed to plants often cultivated and intended for food.

Geographical Distribution and Habitat –
Molokhia is a plant whose origin is controversial. In fact, it is not clear whether it originates from Africa or Asia.
According to some authors, it comes from the Indo-Burmese area or from India, along with several other related species. Other authors believe that, as there is a greater genetic variation in Africa and a greater number of wild species in the Corchorus genus, it is more likely that this is the site of origin.
However, it is a species whose cultivation is lost in the mists of time in both continents and probably grows, wild or as a crop, in every country in tropical Africa. 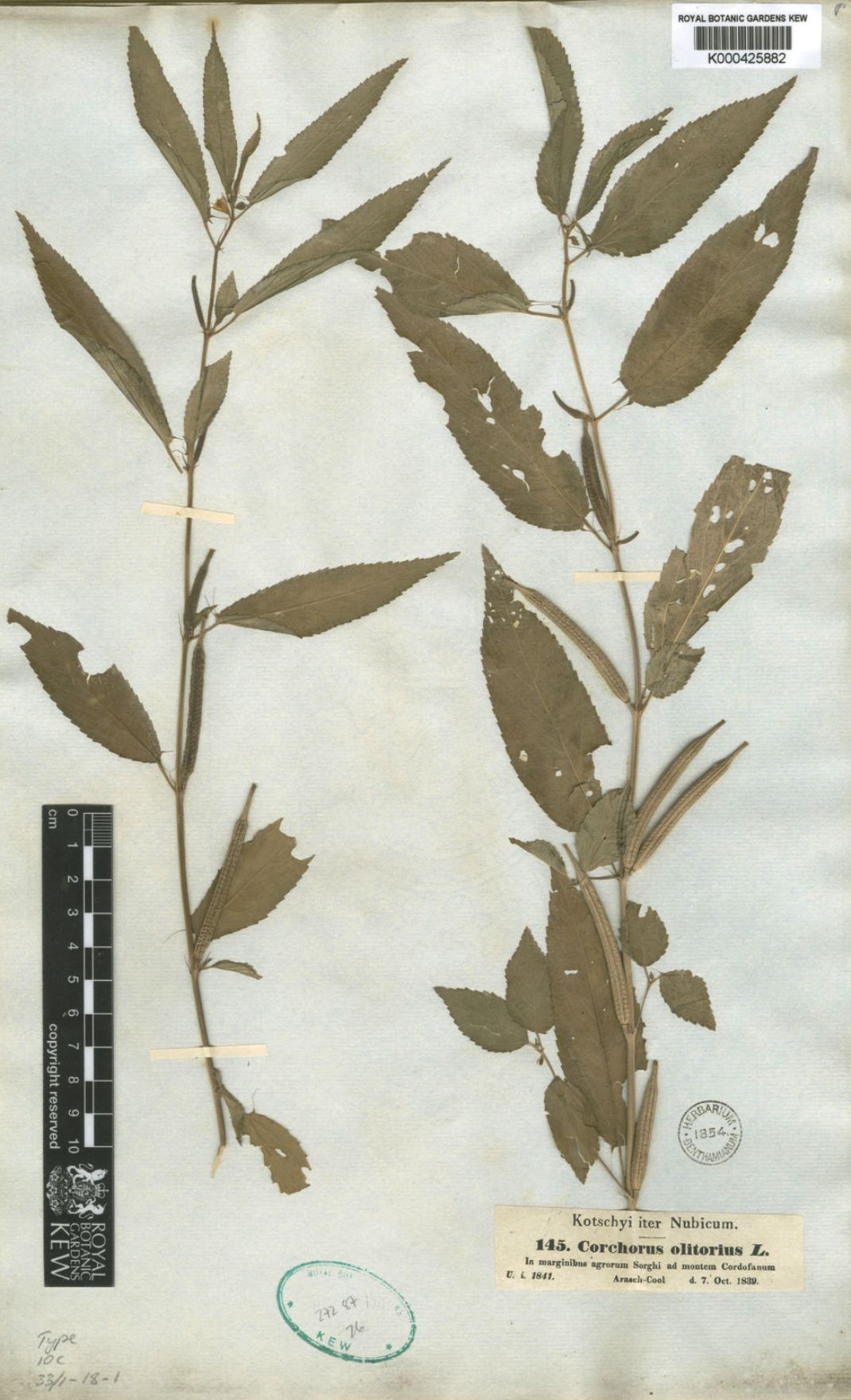 Description –
Corchorus olitorius is an erect herbaceous plant, with an intense branching, which develops around 1.5 m in height but which, if cultivated for the production of fibers, can reach heights of up to 4 m.
From the taproot root, a sturdy and hairless stem is generated, green in color, with a slight brownish-red tinge, which can take on a woody consistency at ground level.
The leaves are acute, serrated and alternate, 6 to 10 cm long and 2 to 4 cm wide.
The flowers are brought from the plant, in solitary form or in tops with two flowers, opposite the leaf, at the end of a short stem; these are made up of 5 sepals and 5 intense yellow petals.
The fruit is fusiform, dehiscent and divided into 5 cross sections through; it measures from 2 to 8 cm in length and the colors vary from gray-blue to green or brown-black. Each chamber contains 25 to 40 seeds, which can reach 125 to 200 seeds per fruit.

Cultivation –
Corchorus olitorius is an annual crop. The plant grows well in the flat areas of the tropics, with the ability to adapt from the warm temperate areas of the tropical desert to the areas of humid forests.
This plant can grow with rainfall trends of 400 and 4290 mm (optimal 1000 mm per year).
Some cultivars are sensitive to water stagnation, especially when they are young. As regards the thermal trend, the optimal one is between 16.8 and 27.5 ° C.
The plant prefers a fertile alluvial soil, with a pH of 4.5 to 8.2, rich in humus and well drained, but grows well even in less than optimal soil conditions.
Before sowing, the soil must be carefully prepared with a plowing and sowing must be carried out in the rainy season.
For optimal germination the seeds must be pre-immersed 24 hours before sowing for ten seconds in hot water (about 93 ° C) in order to overcome dormancy. The optimal sowing substrate must consist of sand mixed with small seeds and in conditions of good humidity maintenance germination takes place two or three days after sowing.
In some cultivation systems, the seedlings are transplanted when they have a height of 10 cm, in rows with a distance of 20-50 cm. When the plant reaches a height of 8-25 cm, harrows are also carried out to eliminate weeds.
The cultivation technique then provides, as fertilization, the contribution of bovine manure, wood ash or rotten water hyacinth (Eichhornia crassipes) or its ashes which are used as organic fertilizer.
The yield of the crop responds more to the availability of water and the presence of organic substance than to the high content of mineral elements.
It is also a plant that can be grown in pots where it can reach 1.5 m in height.

Uses and Traditions –
Corchorus olitorius, known as Molokhia, pharaoh’s spinach, Jewish mallow and with other names also linked to local languages ​​and traditions has a very ancient use and cultivation.
The leaves and young fruits are used as vegetables, the dried leaves are used for tea and as a thickener for soup, and the seeds are edible.
The leaves are considered in Egypt like the common spinach; they are excellent when young, even raw or if larger than cooked; these contain mucilage and a high protein content. In addition to proteins, fats, carbohydrates, fiber, ash, calcium, potassium, iron, sodium, phosphorus, beta-carotene, thiamine, riboflavin, niacin and ascorbic acid are present.
In folk medicine the leaves are used as a possible remedy in the treatment of cystitis, gonorrhea and dysuria.
Leaf consumption has been reported to be demulcent, deobstruent, diuretic, lactagogue, purgative and tonic. They are also used as a folk remedy for pain, dysentery, enteritis, fever, pectoral pain and tumors.
Ayurvedics use the leaves for ascites, various pains and tumors. Elsewhere the leaves are used for cystitis, dysuria, fever and gonorrhea. Cold infusion is said to restore appetite and strength. It can act as an anti-inflammatory, has gastroprotective properties and can be used as an antifertility agent.
The stems are among the main vegetable fibers in the composition of the jute. You can also get paper and other useful materials.
Jute is mainly produced in India, Bangladesh and other Asian countries; this is obtained from the fibers of the bark of Corchorus capsularis and Corchorus olitorius, even if the fiber of C. olitorius is of inferior quality. The fibers have a length of up to 3 meters and a diameter of 2.4 µm.
The process involves cutting the stem of the plant which is then worked to obtain thin fibers well separated from the unwanted wood material. Subsequently the fibers are polymerized and dried.
The fabrics that are obtained from this jute are yarns and twine, bags, carpet fabrics and other mixed fabrics. Furthermore, these fibers can be used as raw material for ropes.
In Africa and the Middle East, cultivation is carried out mainly for food purposes, while fiber is considered of little importance.
The cultivation for food purposes is mainly carried out in Syria, Lebanon, Palestine and Egypt, where the culinary use dates back at least to the ancient Egyptians. It is an important vegetable for the use of its leaves in Ivory Coast, Benin, Nigeria, Ghana, Cameroon, Sudan, Uganda, Kenya and Zimbabwe. It is also grown and eaten in the Caribbean and Brazil, the Middle East and India, Bangladesh, Japan and China. In Nigeria the leaves are boiled to form a sticky and mucilaginous sauce that is served with cassava balls that would otherwise be quite dry.

Preparation method –
Molokhia is a plant as a base for many typical dishes from various countries.
The Syrian, Tunisian, Jordanian, Palestinian and Egyptian dish, made with C. olitorius leaves, is called Mulukhiyah. Malukhiyah is widely consumed in Egypt and some consider it a typical Egyptian dish. These leaves have been a staple food for the Egyptians since the time of the pharaohs.
Corchorus leaves are consumed in the kitchens of various countries. Corchorus olitorius is mainly used in dishes from Southeast Asia, the Middle East, North Africa and West Africa; Corchorus capsularis is instead consumed in Japan and China. When cooked, it has a mucilaginous, almost slimy consistency, similar to okra. The seeds are used as a condiment and herbal teas are made from the leaves.
In Nigerian cuisine, especially among the Yoruba, it is commonly used in a stew known as ewedu, a condiment for other starch-based foods such as amalaor added with gbegiri, a local nigeria soup. In northern Nigeria it is known as Ayoyo. They use it to cook a sauce called Miyan Ayoyo, which is commonly served with Tuwon Masara or Tuwon Allebo.
In Ghana, it is mostly eaten by the people of the North and is called ayoyo. It is mainly consumed with Tuozaafi (food prepared with corn flour).
The leaves of this vegetable are also consumed among the Luhya people of western Kenya, where it is commonly known as mrenda or murere. It is eaten with starchy foods such as ugali, a staple food for most communities in Kenya.
In northern Sudan it is called khudra, which means “green” in Sudanese Arabic. The Songhai people of Mali call it fakohoy.
In India, it is known locally as nalta sag. It is a favorite food during the summer months, especially in Sambalpur and in the western part of Odisha. It is usually eaten together with rice or rice gruel.
In the Philippines, Corchorus olitorius is known as saluyot. It is commonly eaten as a leafy vegetable along with bamboo shoots. In Thai cuisine, the leaves of Corchorus olitorius (locally known as bai po; in Thai: ใบ ปอ) are blanched, along with congee rice. The flavor is reminiscent of spinach and samphire.
In Sierra Leone it is known as krain krain (or crain crain) and is cooked as a stew. The stew is usually eaten with rice or foofoo (a traditional cassava-based food).