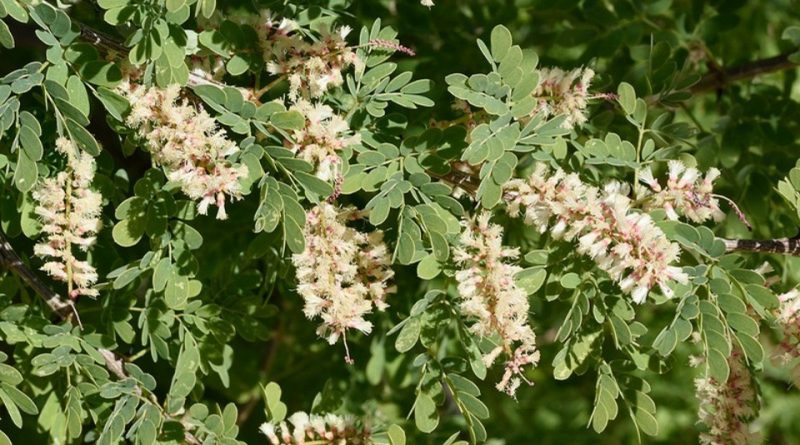 Etymology –
The term Senegalia derives from Senegal, a nation in West Africa, presumably the place of origin of plants of this genus.
The specific epithet laeta comes from happy, luxuriant, vivid, cheerful, cheerful: for the colors, the brightness, etc. ..

Geographical Distribution and Habitat –
Senegalia laeta is a plant native to Africa, in a territory between the Sahara up to Burkina Faso, Eritrea, south of Tanzania, Saudi Arabia and the Middle East in general.
Its habitat is those of small grove and woodland formations in the semi-arid areas of Africa and is usually found on rocky or stony sites where it is located between 1,200 and 1,650 meters above sea level. 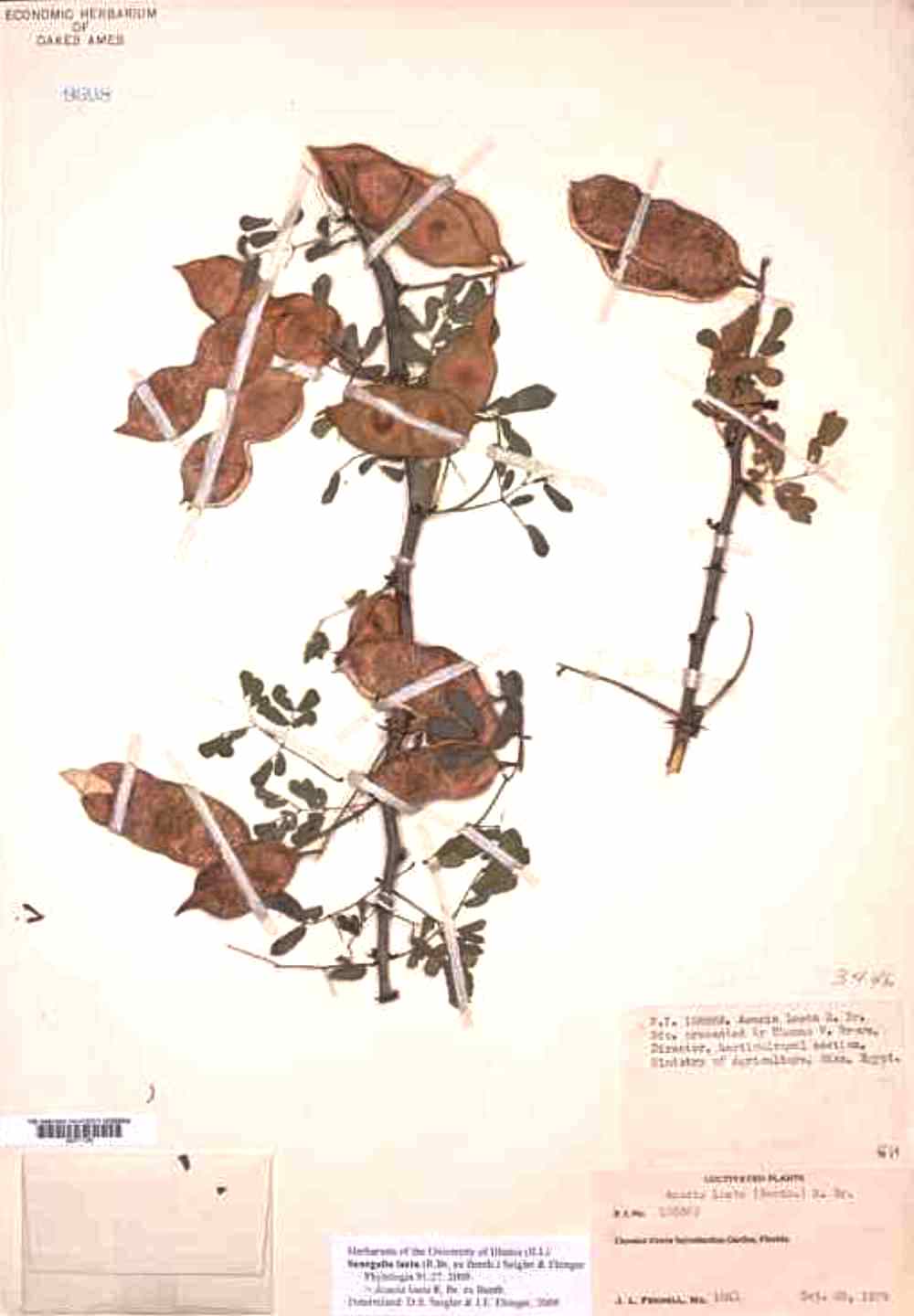 Description –
Senegalia laeta is a perennial shrub or small tree plant that grows up to 4–10 m in height.
The bark is greyish green and appears darker from afar, with pink scales.
The young branches are hairless, gray-brown or rarely purplish, with non-spinescent stipules.
The leaves are bipinnate with 3-5 pairs of fairly large pinnate leaflets and 2-5 pairs of fins, with a 0.6-2 cm stalk.
The leaflets are 1-4 cm long, with 2-5 pairs of fins and 2-5 pairs of leaflets per fin; the leaflets are oblong and asymmetrical, measuring 6-1.2 x 0.3-0.5 cm, greyish green and almost hairless.
The spines are paired and structured into curved axillary spines, with an occasional curved third spike forward; if the third thorn is absent it is normally replaced by a leaf.
The flowers are creamy white and very fragrant, with three flowers arranged on a stem with multiple stems growing on a peak. Pollination is entomophilic.
The fruits are pods of leathery consistency, light brown in color and are pointed.

Cultivation –
The dagger is a drought-resistant plant that grows well on dry, non-calcareous soils, preferring neutral or slightly alkaline, sandy or clayey soils on condition that they are well drained, in full sun position and sheltered from cold winds.
It grows best in areas with an average annual temperature between 21 and 40 ° C and an average annual rainfall of 250-750 mm.
The multiplication occurs by sowing by cutting or by grafting on a subject obtained from seed.
Fresh seeds germinate, without pretreatment within 4-5 days. Older seeds develop a hard seed and can benefit from scarification before sowing to speed up germination.
This treatment can be carried out by pouring a small amount of almost boiling water on the seeds (taking care not to boil them) and then immersing them for 12-24 hours in hot water. At this point absorbed the necessary moisture and swelled; if this has not happened, operate by making a slight incision in the seed, taking care not to damage the embryo, and immersing for another 12 hours before sowing.
It is good that the growth of young seedlings is carried out in a protected nursery to better control temperatures, humidity and brightness.
Growth will be somewhat fast and the seedlings can be ready within 15 weeks of sowing.
Direct sowing is also possible, but this obviously has greater failures and initial slowness.
After the first flowering, an energetic pruning is always to be expected.

Uses and Traditions –
Senegalia laeta was previously included in the genus Acacia; recently it has been reassigned with many African species of acacia to the genus Senegalia.
The classification of the genus Acacia has been the subject of considerable debate. It was generally agreed that there are valid reasons for dividing it into several distinct genres, but there has been a disagreement on how this should be done. As of 2017, it is widely (but not completely) accepted that the section that includes most Australian species should retain the name Acacia, while other sections of the genus should be transferred to other genera.
The dagger is used for multiple uses.
Parts of the tree are used to extract dyes. The tree is also used for forage; in fact, the foliage and pods produce good forage for cattle and the tree resists this use well.
It also produces an edible gum which is used to produce arabic gum, even if of a poorer quality. This is collected at the end of the rainy season when the gum is expelled from the bark and branches and collected by scraping; in some cases the bark is cut into to increase production.
Arabica gum is used in the food industry, where it is used as an emulsifier, stabilizer and flavor fixative; it is also used as an additive (E414) to delay the crystallization of sugars and is found mainly in products such as chewing gum and pastry.
Other uses for which Senegalia laeta is grown are as wood for carpentry, for fences, to create poles, stakes, etc.
The bark of the trunk is also used to make ropes in the medicinal field for its analgesic properties. It is also used to soften the skins before tanning.
In addition, as with other acacias, the bark contains tannins that are astringent. These are used in medicine, e.g. in the treatment of diarrhea and dysentery and can also be useful in case of internal bleeding.
In the external application, tannins are also used to treat wounds and other skin problems, hemorrhoids, eye diseases, mouthwashes, etc.
Other uses of this plant are related to the extraction of active coloring and stabilizing principles of fabrics, silk and as inks for some industrial processes.
In addition, a fiber obtained from the bark is used to make ropes.
Finally, it is a source for procuring firewood and coal.
In the ecological field it is successfully used in reforestation programs as it is very resistant to drought.
Be careful however, as especially in dry periods, many species of acacia can concentrate high levels of toxins related to hydrocyanic acid in their foliage, making them dangerous even for the feeding of herbivores.
Senegalia laeta, like other legumes, establishes symbiotic relationships with some soil bacteria that form nodules on the roots, fixing atmospheric nitrogen and contributing to the increase in the general fertility of the ecosystem where they are implanted.

Preparation method –
Some products for food use can be obtained from Senegalia laeta, such as rubber that is obtained from the resin of the bark, but also in the pharmaceutical field and for feeding livestock.