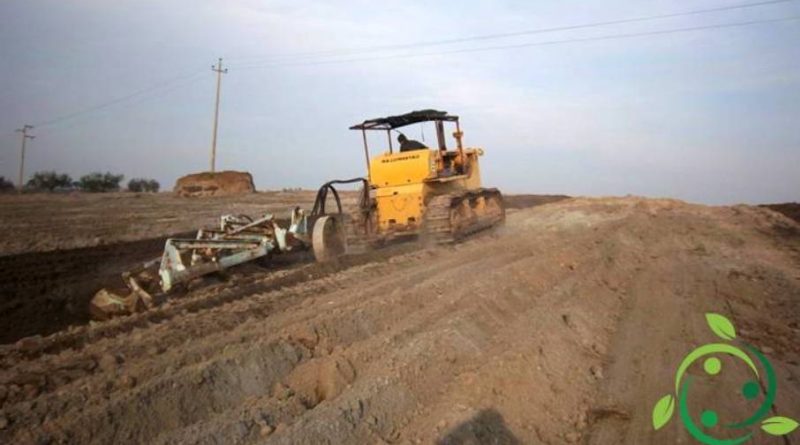 The term ripper, in agronomy, means a deep processing, analogous to tillage, which is carried out between 80 and up to a maximum of 150 cm before the planting of an arboretum. In general the working depth depends above all on the texture: to avoid the possible formation of a relatively superficial processing sole, the depth is increased in the silty and clayey soils.
Unlike the tillage that is a unique process, the ripper can be performed on the same soil at the end of the productive life of an arboretum, before the planting of the new one.
The objective of the ripper is to create soft conditions that guarantee an easier expansion and deepening of the root system of the tree species.
The break-in is carried out with the help of a wheeled or tracked agricultural tractor of great power and grip.
The ripper determines an inversion of the soil profile. It also offers the advantage of having a temporary action to eliminate weeds and can be exploited for the burial of fertilizers.
The disadvantages consist in the eventual carryover of sterile ground on the surface and, above all, in the greater costs and in the rapid mineralization of the organic substance brought to the surface by the underlying layers.
Due to the large size of the clods, following the burglary processing, complementary processing is required which generally consists of medium depth plowing and one or two harrowing. The basic fertilization can be carried out in correspondence with the burglary, but it is preferable to send it to the complementary plowing as it concentrates the fertilizers in the layer most affected by the roots (30-40 cm).
Burglary is an agronomic operation that has the objective of performing preliminary operations such as: clearing or deforestation, surface leveling, stone removal and before complementary work.

For this reason the best period for the execution of the ripper is the summer because in this season the soil is in the cohesive state and the risks of damaging the structure, due mostly to constipation with particularly heavy means, are minimal.
One of the ripper techniques is the hole technique that is obtained by practicing large and deep holes at the points where the plants will be planted.
This operation, which was once performed manually and with specific tools, is now performed mechanically with drills capable of digging holes 80-100 cm deep. Unlike total ripper (often called ripping) it does not therefore affect the entire soil to be implanted, thus further protecting the soil microflora.
Another type of ripper is the trench, also called burglary, which is performed by making a deep trench along the rows of the rows.
This less common technique is performed by tracing a trench with a furrow plow (equipped with a double moldboard) or with a bucket excavator at a depth of about one meter and a width of over one meter.
Ripper, more specifically referred to as “ripping”, is instead performed with heavy scarifiers, called rippers, capable of reaching significant depths. The ripper is a tool composed of 1-4 discarding organs and is carried by a tractor with adequate power and grip or by a machine for earth moving and at the same depth, ripping requires lower traction forces. This type of processing does not alter the profile of the terrain but limits itself to interrupting its continuity with a series of parallel cuts.
For greater efficiency of the processing it is preferable to perform two passages in perpendicular directions. Compared to plowing it has the disadvantage of not being able to be exploited for the landfill of soil improvers and fertilizers and has, moreover, an effect of elimination of smaller weeds. The processing could be followed by a simple harrowing, but a subsequent medium depth plowing is also necessary in order to interrupt the fertilizers supplied with the bottom fertilizer.