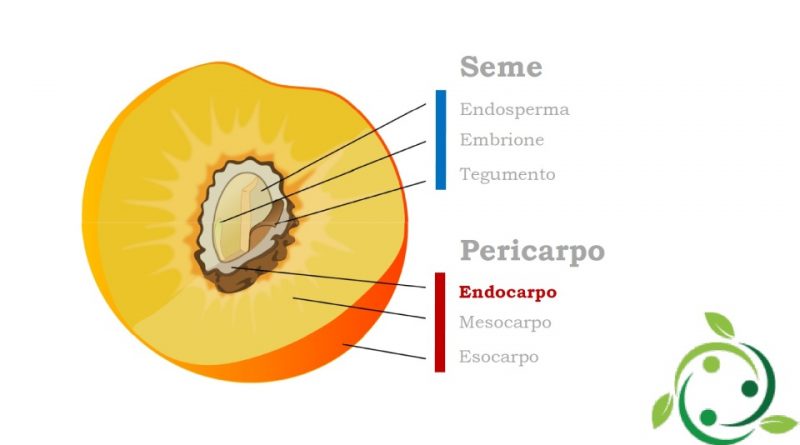 By endocarp or endocarpus, in botany, we mean the inner portion of fleshy fruits, it is the innermost layer of the pericarp and is variously developed and consistent.
The endocarp assumes different conformations also in relation to plant species. In peaches it is lignified and constitutes the wall of the core; in citrus fruits, the endocarp is membranous and consists of ovarian loggias (segments), in which vesicular cells filled with juice that surround the seeds are housed.
The endocarp, together with the epicarp, which constitutes the so-called “peel” of the fruit, and the mesocarp, which includes the tissues located between the epicarp and the endocarp, is the fruit (or pericarp) of the flesh.
Furthermore, the fleshy fruit itself can be substantially of two types: drupe or berry.
In the drupe the endocarp is woody and contains a single seed.

The woody endocarp consists of sclereids, or stony cells, which are dead cells with thick walls and impregnated with lignin. Typical drupe endocarps with these characteristics are the shell of walnut, peach, apricot and cherry.
In the berry the endocarp, when it is ripe, is often melted with the mesocarp and assumes a consistency that is usually meaty. In this case the seeds are generally numerous.
Among the examples of this type of endocarp we have the tomato berry. The shape of the endocarp can take on different characteristics such as in the pomegranate berry, called balaustio, where the tissue formed by fusion of the mesocarp and endocarp has a membranous consistency and identifies lodges containing seeds.
When the seed still germinates enclosed in the fruit, we speak of endocarpous germination, characteristic of many mangroves, Sechium edule etc.