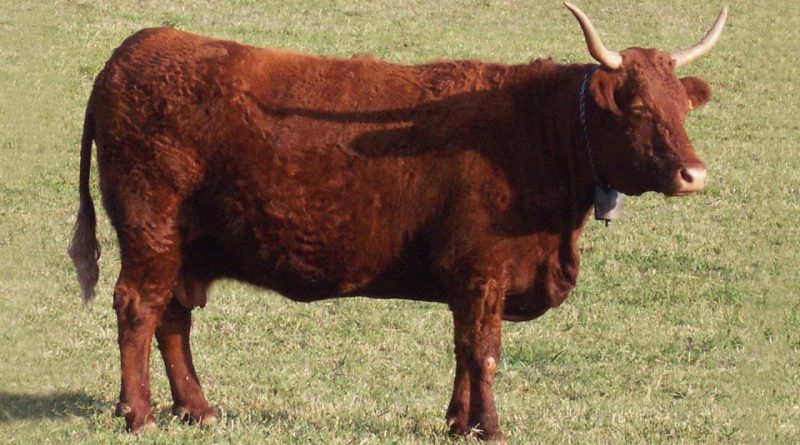 The Salers is a bovine breed (Bos taurus Linnaeus, 1758) native to the region of Auvergne, in the central massif of France, with a dual aptitude for the production of meat and milk.

Geographical and area distribution –
The Breed Salers is a native breed that is bred in purity in France especially in the Cantal mountains region in the Massif Central and in the Pyrenees and today is still present in other countries.
The Cantal is an area where we find sheep farms on the highlands and from cattle (Salers) in the plains. The vegetation of the Cantal is diversified. Here you can find the Maurs mimosa, the great yellow gentian of figs, blueberries and chestnut trees, especially in the south and west of the department.
Bordered by the Salers plateau, the Cantal mountains (70 km in diameter) find their culminating point in the Plomb du Cantal, at 1,885 meters. The Puy-Mary stands up to 1,787 meters. Around these mountains there is a luxuriant and diversified vegetation and glacial valleys.

Origins and History –
The Salers is a cattle breed originally from Auvergne in the Massif Central of France. It is a native breed, recognized in 1853, and has established itself for its triple attitude abilities.
The certain origins of this bovine variety date back to the early 1800s and can be identified in the red Auvergnate breed of the Salers highlands, described in the collection of Prof. Grognier in 1831. To be considered the “official founder” of the Salers breed, in 1850, was the agronomist engineer Ernest Tyssandier d’Escous, who put theories of selection into practice and disseminated them in the region; in a short time the animals of the Salers plateau acquired a notable fame and the Salers breed name unquestionably imposed itself on that of the Auvergnate breed.
Originally, the Salers was a triple-purpose breed, from milk, meat and work. With the rise of mechanization in the early 1960s, which gave impetus to the spread of breeds specialized in the production of milk, and with the incentive of public policies in favor of the specialization of breeds, Salers was destined mainly to production of meat; his first registration in the register of nurse breeds dates back to 1981. The Breed Association was founded in 1908.
Today, of this breed, two branches coexist: the number of suckler cows, destined to the production of meat, amounts to 211000 heads, while the branch of the milk Salers, for the production of quality cheeses, consists of just 4000 heads. The dairy population is extremely small and although the number of dairy cows has stabilized after a period of severe decline, the figure remains precarious.
In fact, the Tradition Salers association, created in 1992, aims to maintain and relaunch the particular farming and milking system called: Traditional Salers System; currently the number of dairy salers has stabilized, supporting the settlement of some young breeders, but the numbers and dynamics are still fragile.

Morphology –
The Salers is a bovine breed that is recognized for the coat of uniform red-brown color, with the red fleshy mucous membranes.
These are large animals. The weight of adults reaches 700-800 kg for cows and can range from 1000 to 1300 kg for studs grown in good condition.
The height at the withers is 135 – 143 cm for cows and 145 – 153 cm for bulls.

Production aptitude –
The Salers is a docile breed, strengthened by constant grazing; originally a triple attitude is now a dual-purpose breed with a prevalence for meat. It also has good fertility and longevity. It has an average production at the head of the controlled cows of 3.000 kg, with fat of 3.53%, proteins 3.41%.
Good performance as meat production, with rapid growths. The birth weight is 36 – 39 kg, with a daily increase of 1050 – 1400 g, age at the first calving of 31 – 35 months, inter-division of 366 – 374 days and ease at birth of 99.4%.
This breed is known for its high reproductive aptitude and for its strong maternal instinct, a peculiarity that makes it the best of mothers: in fact milking is only possible in the presence of calves.
Over the centuries, farmers have adapted to this peculiarity of Salers, developing a specific breeding system known as Système Traditionnel Salers. The peculiarity of this method lies in the fact that milking can take place exclusively in the presence of the calf next to the mother, which otherwise does not give milk. Milking takes place in three stages: the calf is brought to suction in order to stimulate the release of milk; the calf is then tied close to the mother to be milked; at the end of milking the calf is released for dripping, running out of the remaining milk in the udders. Since the milking takes place twice a day, the calf is brought next to the mother in the morning and in the evening during the whole lactation period (9-10 months), which represents an additional workload for the breeder. This was the only breeding method practiced in the region for several centuries; it can therefore be said that the Système Traditionnel Salers is at the origin of the Auvergne cheeses. Today, however, the population of Salers dairy cows has been greatly reduced and only a fraction of these cheeses is authentically produced from their milk. Being an indigenous country breed of the region, it is particularly well adapted and suitable for the enhancement of hay and forages of local grasslands. The specific skills inherent to milking in the presence of the calf, give the milk characteristics that are quite peculiar, such as the natural insemenzamento of the bacterial flora for the production and maturing of the cheeses; the recourse to the Salers breed as a native, together with the particular skills of the breeders, make it possible to obtain a milk and therefore cheeses with a strong link with the territory that are an integral part of the cultural identity of the region.
Salers milk traditionally produces raw pressed cheeses with rennet coagulation, double pressing, salting after breaking the curd and processing twice a day, after both milkings.
Salers tradition is the most characteristic of the cheeses produced by the dairy branch, but there are also other types, such as the Saint-Nectarine DOP, the Cantal DOP, the toma.