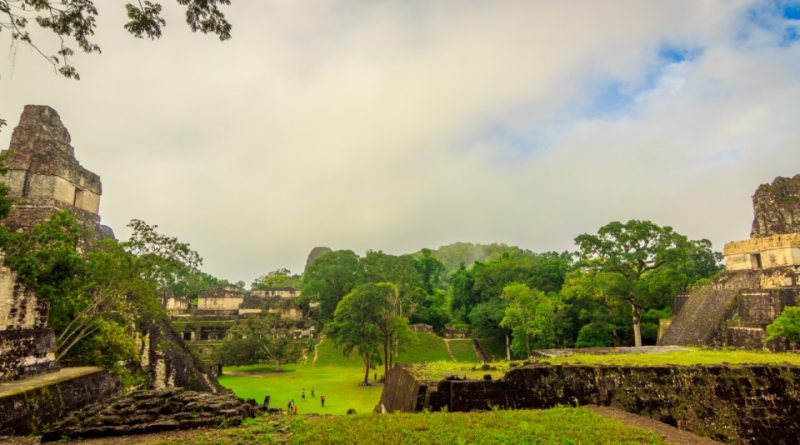 The Tikal National Park, in Guatemala, comprises 575 square kilometers of jungle and thousands of ruined structures.
Tikal was declared a national monument in 1931 and a national park in 1955, one of the first protected areas in Guatemala.
More recently, in 1990, the vast Biosphere Reserve of the Maya Forest was recognized by UNESCO.
Tikal is the largest of the ruined ancient cities of the Mayan civilization and is located in Guatemala in the Petén department.
Tikal became one of the major regional power centers immediately after the collapse of the Preclassic Period, a time when political and religious power was concentrated in the site of El mirador and in nearby Nakbé. Tikal’s chronology until the third century is only partially known. The founder of the dynasty was Yax Ehb ’Xook who should have lived around 90 BC The first ruler of which they have an interesting amount of historical data is Chak Tok Ich’aak I. Various fragments of monuments and various ceramics bear his name. From the few data that can be extracted from these texts we can see that the city enjoyed excellent economic health and that it had perhaps become one of the major political powers in the area.
The political life of Tikal would soon be upset by an event that has not yet been completely clarified by scholars: the arrival of Teotihuacan. Teotihuacan was the largest military force in Mesoamerica at the time. It already maintained commercial relations with the Maya area, but it seems that these “contacts” were no longer enough for its sovereigns.
On 31 January 378 marks the arrival of Sihyaj K’ahk ’of Teotihuacan in Tikal. Chak Tok Ich’aak I had died only 15 days and there are no reports of other ruling kings at the time of the arrival of the Teotihuacan army. Sihyaj K’ahk ’starts from Tikal the reorganization of all the Peten by crowning kings and confirming sovereigns already present. In Tikal the new king is called Yax Nuun Ahyiin I, son of the king of Teotihuacan and a Mayan princess of Tikal. The reign of Yax Nuun Ahyiin I is characterized by the massive presence of teotihuacana iconography in public art. There is no single example of a portrait of Yax Nuun Ahyiin I that is in Mayan style. At his death his son Siyaj Chan K’awiil II follows him on the throne. He had the famous Stele 31 erected, where he is seen dressed as a Mayan king, flanked on both sides by images of his Teotihuacana uniformed father.
The city, which reached its maximum splendor between 700 and 800 AD, was built respecting a symbolic code relating to the cosmic Mayan beliefs. Numerous temples rise at the Great Central Square, characterized by the vertical ascent, like the nine-body pyramid to which a decorated crest was added. Often they still house large funerary objects intact. The cult center is composed of seven architectural complexes that house steles and altars. The Acropolis, on the other hand, does not appear to be used for religious rituals, but for residential use.
Today the only central part of the ancient city contains 3,000 buildings and covers about 16 square kilometers.
Tikal is also part of the million-hectare Mayan Biosphere Reserve created in 1990 to protect the dense forests of Peten, which began to disappear at an alarming rate due to population pressures, illegal logging and slashed agricultural practices. burned.
The great stone monuments of Tikal languished for centuries and were gradually taken up by the jungle. Hernan Cortes, the conqueror of Mexico, and his diverse band of conquerors marched from Tikal in 1525, but could not see his temples hidden by trees of silk, cotton, cedar and mahogany 40 meters high.
The ruins of Tikal are in fact found on a plain covered with rainforest, including ceiba (Ceiba pentandra) trees consecrated by the Maya; tropical cedars (Cedrela odorata) and mahogany (swietenia). Regarding the fauna, agoutis, atelinae, howler monkeys, peacocks, toucans, green parrots and leaf-cutting ants are easily encountered. Jaguars and coati have been sighted inside the park.
Huge trees still wrap around the buildings of Tikal, which are grouped into groups joined by wide causeways that wind through the tropical forest, housing toucans, parrots, wild turkeys, howler monkeys, raccoon-like mantimundi and countless other creatures.
Later, Spanish friars wrote of a large city hidden in the forests of Peten. It was 1848 when an expedition sent by the Guatemalan government officially discovered the ruins. The Swiss, German and British archaeologists soon followed to remove the debris and start studying the site.
The University of Pennsylvania Museum and the Guatemalan Institute of Anthropology and History have brought Tikal’s structures back to their current conditions in the 1950s and 1960s. UNESCO designated ruins as a World Heritage Site in 1979. Today, Tikal is in Guatemala what the Great Pyramids are to Egypt, a national symbol and a source of pride in the past.
Among the historical monuments that stand out we recall the large scale of Tikal which also amazes those who have visited spectacular Mayan sites such as Palenque and Chichen Itza in Mexico.
The Temple of the Great Jaguar (Temple I) and the Temple of the Masks (Temple II) stand out as a pair of colossal bookends on opposite sides of the Grande Plaza, a vast expanse surrounded by terraces, palaces and dance grounds.
Temple I rises about 50 meters above the eastern end of the square. A stone staircase leads to the nine levels of the pyramid, corresponding to the nine levels of the Maya underworld. Tourists have died to death from these dizzying steps, prompting park authorities to ban climbing recently. 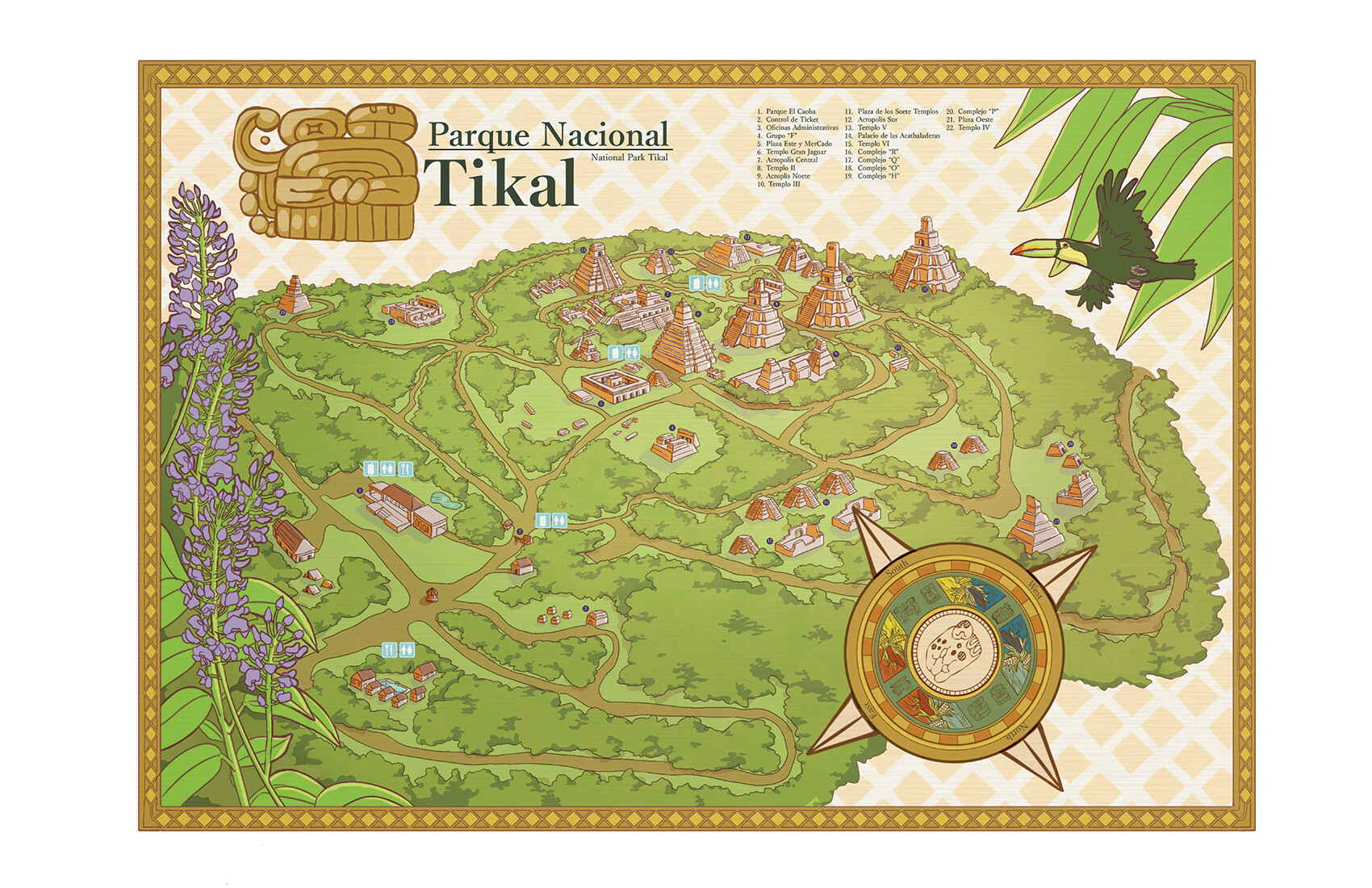 In 1958, archaeologists discovered the tomb of Ah Cacau (Lord Chocolate), one of the greatest rulers of Tikal, inside Temple I. The skeleton of Ah Cacau was decorated with jade ornaments and surrounded by precious offerings, including including ceramics, alabaster, shells and pearls from the Caribbean coast. You can see a replica of this elaborate tomb in the Tikal Museum near the visitor center.
Temple I produced other treasures, including finely carved wooden lintels above its doors, which provided clues to Mayan beliefs and cosmology.
Called Temple of the Masks because of the huge stone masks that guard its stairs, Temple II is almost as tall as Temple I, but safer to climb. Its summit offers views of travel posters on the Grande Plaza and on two labyrinthine ceremonial and residential complexes called Northern Acropolis and Central Acropolis.
Dozens of stone pillars known as stelae, each combined with a circular altar, rise in rows across the square and along the surrounding terraces. Sculptures and glyphs commemorating important dates and the great works of the Tikal rulers still adorn many of these altered monoliths.
From the tops of the pyramids of Tikal, Mayan astronomers followed the movements of Venus and all the other visible planets.
The Mayans used these calculations – extremely accurate even according to today’s standards – to fine-tune their complex calendar, which can be compared to a system of interlocking gears made up of a 260-day calendar known as the tzolkin which joined with a 365 day solar calendar to complete 52-year cycles.
One of the Tikal Stelae records a mysterious date more than five million years ago in the past, and glyphs on a stele in Quirigua, in eastern Guatemala, commemorate an obscure event that happened 400 million years ago.

Flora –
The Petén region and the Maya forest are home to an impressive diversity of flora and fauna in its various terrestrial and freshwater habitats. More than 2000 superior plants, including 200 tree species have been inventoried. Palms, epiphytes, orchids and bromeliads abound in the various types of forest.
The jungle around Tikal, in addition to its native vegetation, has protected ancient cultivated species such as: cotton, sisal, tobacco, beans, squash, pumpkins, sweet potatoes, peppers, avocados, many fruits, and other ornamental relics and plants of economic importance.
It can be said that around Tkal there is a huge laboratory for plant conservation, where botanists and other scientists can still find plenty of primordial germplasm.
Among the species present are the orchids the most numerous compared to other plants.
The importance of this source of germplasm supply can have great importance for the agriculture of the future, especially in North America.
In fact, researchers are constantly looking for more resistant varieties that can increase yields and strengthen tolerance to drought and resistance to insects and diseases.
All these factors contribute to the importance that the jungle of Guatemala, a true open-air laboratory, can hold for the agriculture of the future.
The Texas Research Foundation is currently engaged in a survey to determine the extent and variety of plant resources in the region and to assess the ancient Maya agriculture of the plains of Guatemala.
To date, this survey on plant resources has recorded over two thousand species.

Fauna –
The different ecosystems and habitats host a wide spectrum of neotropical fauna and flora. Five felines, including Jaguar and Puma, several species of monkeys and anteaters and more than 300 species of birds are part of the remarkable wildlife. Forests include over 200 species of trees and over 2000 taller plants have been recorded in different habitats.
The more than 100 mammals comprise over 60 species of bats, five species of felids: Jaguar, Puma, Ocelot, Margay and Yaguarondi, as well as many endangered species.
The more than 330 recorded bird species include the nearly threatened Meleagris ocellata, the crested eagle (Morphnus guianensis) and the ornate eagle-eater (Spizaeto ornata), as well as the vulnerable major hocco (Crax rubra). Of the more than 100 reptiles, the endangered Central American river tortoise, the Morelet crocodile and 38 species of snakes stand out. In addition to 25 known amphibian species, there is considerable fish fauna and a great diversity of invertebrates. The property is also known for the wild varieties of several important agricultural plants.