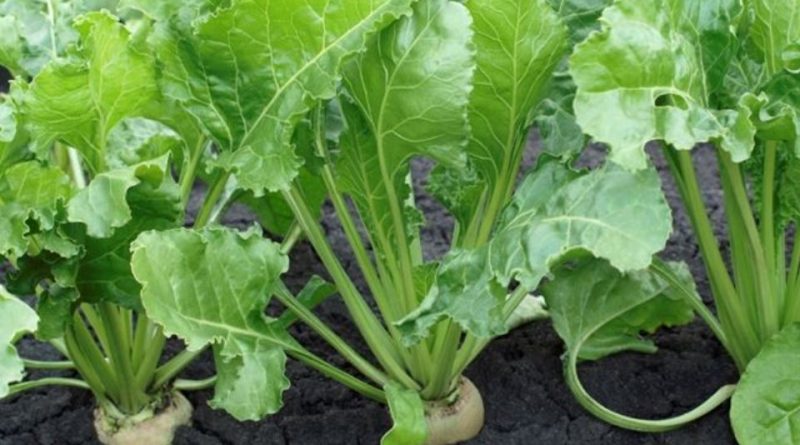 Systematics –
From the systematic point of view it belongs to the Eukaryota Domain, United Plantae, Magnoliophyta Division, Magnoliopsida Class, Caryophyllales Order, Chenopodiaceae Family and therefore to the Genus Beta, to the Species Beta vulgaris and to the Subspecies B. vulgaris var. saccharifera.

Etymology –
The term Beta is the ancient Latin name in Pliny, Cicero and others, perhaps derived from the Greek βλίτον blíton beet (in Theophrastus). The specific epithet vulgaris derives from vúlgus volgo: very common, ordinary due to its wide spread, banal. The name saccharifera comes from the Greek σάκχἄρ, -αρος sácchar, -aros sugar and from φέρω phéro bring: which produces sugary substances, capable of producing sugars.

Geographical Distribution and Habitat –
The origin of sugar beet is uncertain as two different centers are possible: one represented by the Mediterranean basin or the steppe regions of south-western Asia and the second located in the Canary Islands or Cape Verde. It is a species that prefers deep soils of medium texture, rich in organic substance and with good water capacity.
Today, this plant is one of the most important crops in the temperate zone. The main producers are the European countries and those of the former Soviet Union. 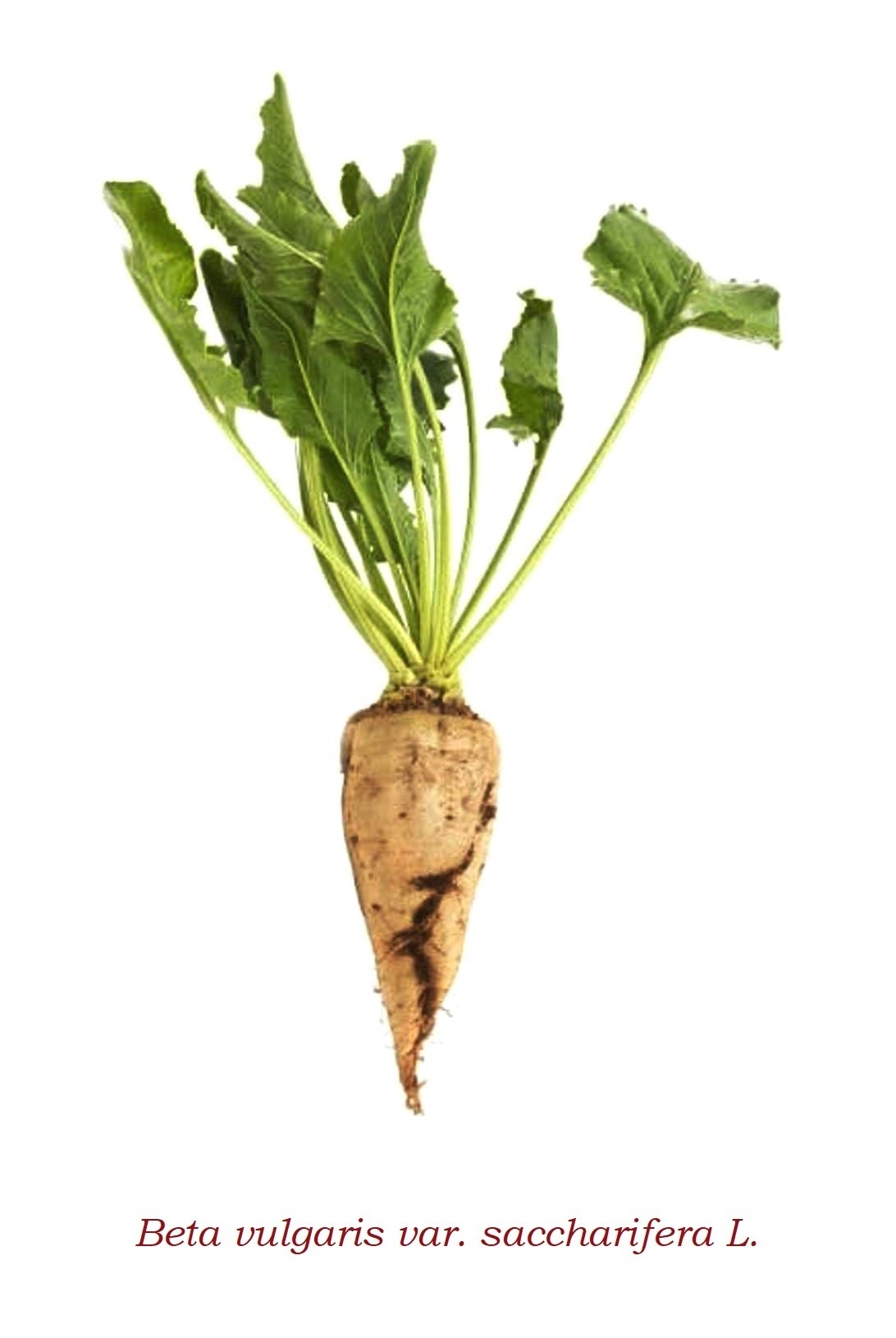 Description –
Beta vulgaris var. saccharifera is a biennial plant with a vegetative stage in the first year and a reproductive one in the second.
The plant has a thick, fleshy, more or less conical root, which can reach 2 meters, of greyish color, provided with transversal roughness in the upper part and of two longitudinal grooves (called saccharicus grooves) with a spiral shape and abundant capillices .
The stem is short and erect and the leaves are arranged in verticils (rosettes), petiolate, usually heart-shaped at the base, obtuse, rounded or tapered, smooth, wavy or bullous, more or less intense green.
The flowers, which generally appear in the second year, are small and inserted directly on 1.5-2 m long, erect, branched up scapes, gathered in normally bi-tetraflore inflorescences.
The infructescences, are of the roundish, angular, wrinkled glomeruli and the seeds are brown-greenish, yellowish-brown or blackish-brown, lenticular, 1.5 m thick; 2.4-4 mm long, weighing 2-3 mg,

Cultivation –
For the cultivation of sugar beet you need to wait a minimum temperature of 5-6 ° C to start germination; the optimal temperature is, however, at least 10-12 ° C.
Furthermore, for a good accumulation of reserve substances, it is not necessary to have too high day and night temperatures, as they increase the intensity of breathing. Fresh nights and warm days, from the second half of August, favor the accumulation of sugar.
The soils where to cultivate this plant must be deep, of medium texture, rich in organic substance and with good water capacity and with neutral pH, between 6.5 and 7; acid soils and water stagnations are unsuitable.
To obtain good yields, good water availability is also required throughout the cycle.
In the nutrient balance, it should be noted that for every 10 tons of roots an average of 40-50 kg of nitrogen, 15-18 kg of P2O5 and 55-65 of K2O are removed.
From an agronomic point of view, sugar beet is a crop grown from renewal and is generally placed between two wheat crops. Leave a well-prepared soil for the next crop. It is advisable to place an interval of a few years between one and the other beet culture.
For the preparation of the cultivation a deep plowing is carried out in the summer period. Before sowing, abundant fertilization based on manure must be applied and, in agro-ecological techniques, it is necessary to think about the recovery of the vegetable substance and the backfilling of the previous crop.
The sowing period, taking into account the optimal minimum temperatures, starts in February in central Italy and in March in the Po Valley, in addition in the arid areas of Southern Italy and the islands, autumn cultivation is practiced (sowing in October and harvested in June-July), thanks also to the selection of non-biennial but multi-year types of beetroot, so that the low temperatures experienced during the winter cannot induce flowering.
Sowing is mechanized with precision seeders, with intervals of 45 cm on average with seeding density of about 10 plants per square meter at harvest and a portion of the seeds planted is not going to be successful. Given the delicacy of the beet seedlings there are normally strong failures: the number of seeds to be sown is 15-20 to obtain 10 plants per square meter.
The sowing depth is around 3-4 cm, after which a rolling is carried out which favors wetting and germination.
Sugar beet is very sensitive to the competition exerted by weeds, so we must take action to the detriment of weeds, such as false seeding, weeding. The chemical weeding widely used to date is proving increasingly unsuitable on the effects of fertility and soil structure, with highly negative long-term problems.
For the harvest the period in which the maximum amount of sugar has accumulated is expected; the technique involves removing the roots from the ground; cleavage, ie elimination by cutting the upper part of the radical body (collar) with the leaves inserted, a part low in sugar and rich in impurities that would make industrial processing difficult; loading on the vehicles that will carry the roots to the sugar factory. These operations today are totally mechanized.
The average yield is over 400 quintals / Ha with 16% sugar but much higher yields can be achieved.
There are different varieties classified according to botanical or technological parameters.

Uses and Traditions –
Sugar beet is a cultivation practiced since the Greeks and Romans, even if it was cultivated as a vegetable plant.
Until the end of the eighteenth century and the beginning of the nineteenth century, when there was not yet an industrially convenient procedure for the extraction of sucrose, his was a marginal crop and only the growing foliage was used above ground for forage use.
Its importance as a sugar plant dates back to the eighteenth century when the chemist Margraff discovered in sugar beet crystallizable and his studies were taken up by Franz Karl Achard who, with the help of Frederick the Great and then of William III, planted crops in Silesia, perfecting the extraction and processing and processing procedures.
With the establishment of the Napoleonic bloc, research on this crop expanded, initiatives multiplied as European countries suddenly found themselves without the cane sugar supplied up to that time by England. In Italy the spread of beetroot was very slow and alternate until 1887. In that year E. Maraini, considered the father of the Italian sugar industry, worked to rationalize the cultivation and extraction technique and promoted the strengthening of the Rieti factory already arose and failed previously.
The roots of sugar beet are used in sugar beet. The leaves and collars can be used as fodder. From industrial processing, by-products are obtained: fresh exhausted pulps (used in animal feed); dry pulps (they are obtained from the previous ones after rapid drying; they are also used in animal feed).
For this plant the parameter of “internal or technological quality” is used which refers to its ability to be transformed into sugar. Total sucrose is the most important parameter, it expresses the concentration of sugar in the root of the beet and is expressed in percent by weight.
This is measured with the polarimeter which identifies the economic value of the crop and is called theoretical sugar, because it cannot be entirely extracted and crystallized. The part of sugar that can be extracted and crystallized compared to the total is called white sugar and represents the industrial value of the product. The percentage of theoretical sugar that turns into white sugar constitutes the Removable Yield, which depends on the quantity, present in the root, of some substances that negatively interfere with the extraction process, lowering the percentage of sugar that crystallizes and increasing what remains tied to the by-product of refining, which is the molasses (saccaro-molasses). For this reason, these elements are referred to as molasses or molasses.
To identify the technological quality of the product delivered in the plants, the sugar industry determines the content (in mmol per 100 g of pulp) of the three main melassigeni in all the samples: potassium (K), sodium (Na) and alpha-nitrogen amino (αN). In addition to these, in the extraction sauce are sometimes present other compounds that have a considerable influence in the crystallization process, in particular the reducing sugars (glucose and fructose, which are determined on the samples, only in some establishments). These molasses substances, during the extraction process, cause direct damage: immobilizing part of the sucrose and preventing its crystallization; and indirect: acidifying the extraction sauces. In an acidic environment, enzymes are activated that can break down the sucrose molecule into glucose and fructose, simple sugars that do not crystallize; furthermore, to restore the alkalinity of the sauces, it is necessary to add soda (NaOH) which contains sodium, a substance that is in itself melassigena.
In general, the average composition of beet pulp:
– 75% water;
– Dry matter 25%;
– Total soluble substances 20%;
– 16% sucrose;
– Not soluble sugars 4%;
– 1.8% nitrogenous organic substance;
– 1.4% potassium organic substances;
– 0.8% mineral substances;
– Total insoluble substances 5%.
In addition to industrial uses, we must mention the beneficial properties of sugar beet: in fact, the plant should not be remembered only for the production of sugar, but also for its healthy and nutritious qualities. The root is rich in mineral salts and vitamins, therefore it is mineralizing and vitaminizing. Moreover, it boasts purifying, antiseptic, reconstituting, digestive and stimulating bile production properties; similarly, sugar beet is able to absorb toxins from cells and facilitate their elimination. Furthermore, sugar beet is an excellent natural remedy for the treatment of anemia and brain infections, as well as stimulating the lymphatic system and the production of erythrocytes.
Regarding the nutritional aspect, 100 grams of sugar beet provide about 20 Kcal: 91% is water, carbohydrates are 4%, proteins just over 1%. Antioxidants, nitrates and oxalic acid also make up the sugar beet phytocomplex.

Preparation Mode –
Sugar beet is a plant that over the centuries has received considerable work of selection and improvement so as to pass from vegetable cultivation to industrial cultivation, especially for the production of sugar.
In general, however, this plant is used indirectly in the kitchen, and in the food industry for the production of sugar but also directly for the preparation of various dishes and for its beneficial properties, linked to the salt content and antioxidant substances but also in the field of feeding of the cattle for the use of the leaves.