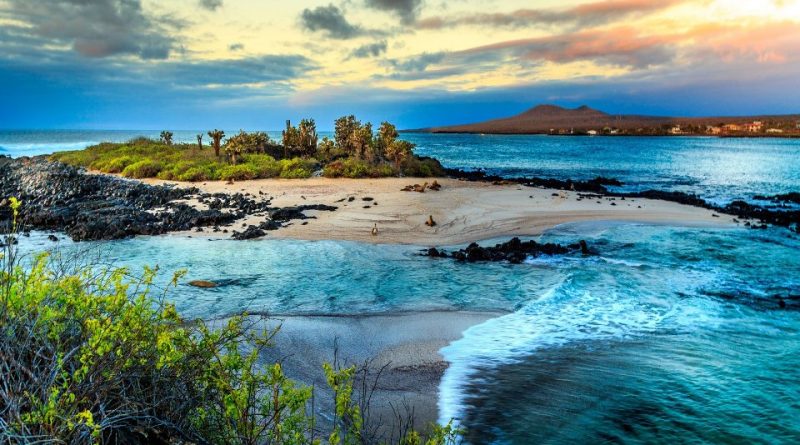 The Galapagos National Park is the first national park in Ecuador and declared a UNESCO World Heritage Site.
This park was founded in 1959 and became operational in 1968.
The Ecuadorian government has delimited 97% of the surface of the Galápagos Islands as the country’s first national park. The remaining 3% is distributed between the inhabited areas of Santa Cruz, San Cristóbal, Baltra, Floreana and Isabela.
In 1971, the Galapagos National Park Service assigned its first superintendent, 2 officers and 6 forest guards on the island of Santa Cruz.
Subsequently, in 1974, the Galapagos National Park had its first management plan and a team of officials in accordance with the organic structure decided in 1973, with a Superintendent, 2 officers and 40 forest guards in order to respect the management objectives .
In 1979, UNESCO declared the Galapagos Islands a natural heritage for humanity, entrusting the park’s superintendent with the responsibility for the permanent conservation of the park and the protection of the islands.
The islands that make up the Galpagos are: San Cristóbal (Chatham): named after St. Christopher, patron saint of sailors; Española (Hood): in honor of Spain and an English nobleman named Hood. Santa Fé (Barrington): named after the homonymous Spanish city, it has an area of ​​24 km² and a maximum altitude of 259 meters above sea level. Genovesa (Tower): from the name of the city of Genoa. Floreana (Charles or Santa María): named after Juan José Flores, the first president of Ecuador, during whose administration Ecuador took possession of the archipelago. It is also called Santa Maria, in honor of one of the three caravels of Christopher Columbus. South Plaza: owes its name to a former Ecuadorian president, General Leónidas Plaza Gutiérrez. Santa Cruz (Indefatigable): the English name is the same as a British fleet ship. Baltra (South Seymour): the origin of the name is not known. North Seymour: the name derives from that of the English noble Lord Hugh Seymour. Marchena (Bindloe): from the name of the friar Antonio Marchena. Pinzón (Duncan): from the name of the Pinzón brothers, captains of the Pinta and Niña caravels. Rábida (Jervis): bears the same name as the convent in which Christopher Columbus left his son in foster care during his journey to the Americas. Bartolomé: from the name of Lieutenant David Bartholomew of the British Navy. Santiago (San Salvador, James): this island has an area of ​​585 km² and a maximum altitude of 907 meters above sea level. Pinta (Abingdon): takes its name from one of the caravels of Columbus, the Pinta. Isabela (Albemale): so named in honor of Queen Isabella of Castile, who financed Columbus’s journey. Fernandina (Narborough): in honor of King Ferdinand II of Aragon, who financed Columbus’s journey. Wolf (Wenman): owes its name to the German geologist Theodor Wolf. Darwin (Culpepper): it was named in honor of Charles Darwin.
One of the Galapagos visitors’ favorite routes is Tortuga Bay, located on the island of Santa Cruz, about a 20-minute walk from the main water taxi booth in Puerto Ayora. The walking path is 2,490 m and is open from six in the morning to six in the evening. Marine iguanas, crabs and galapagos birds are visible along the lava rocks of Tortuga Bay. There is a separate bay where you can swim and it is common to see white tip sharks swimming in groups, small fish, birds and sometimes the gigantic galapagos tortoise.
The Galapagos National Park is in fact famous for hosting an almost unique biodiversity in the world. 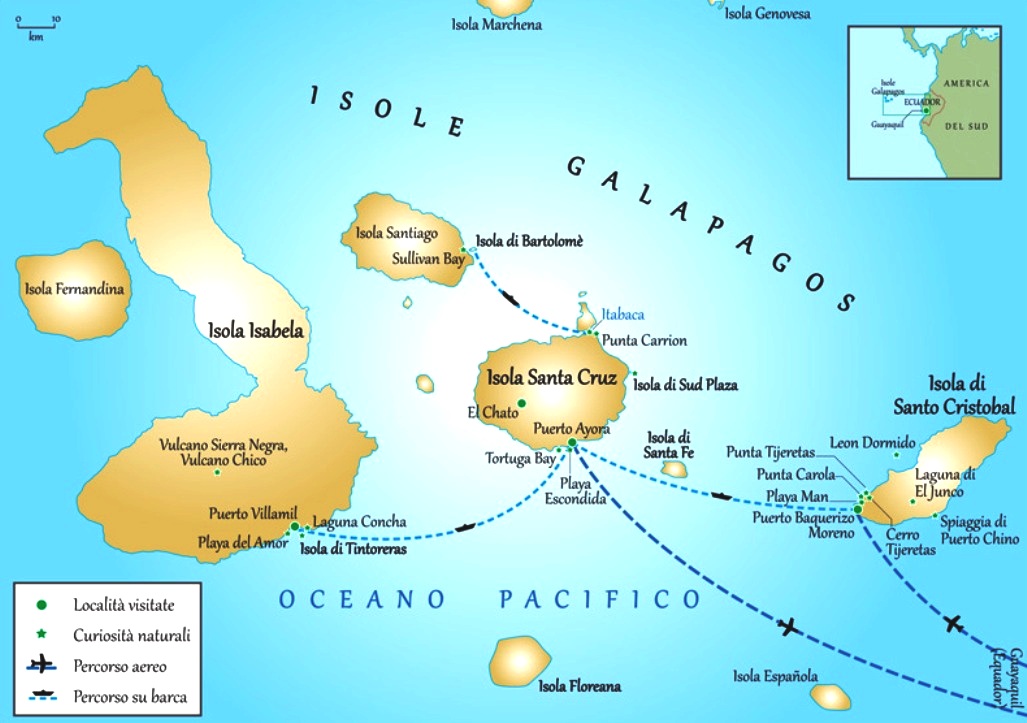 Flora –
In this extraordinary system of islands it is possible to distinguish 560 species in different plant families, of which a third are endemic, such as: coffee, cotton, chilli, passionflower and tomato. In addition to endemic species of widespread genera elsewhere, there are also entire endemic genera, such as Scalesia, the margherita tree, and some cacti, such as Brachycereus, called lava cactus and Jasminocereus, the candelabra cactus, which will be illustrated in the following lines.
In the coastal strip, especially in the tidal area, located in the few estuaries, in bays and inlets you can see expanses of mangroves, in which the endemic species of the heron lives.
From the beaches and from the coves up to 100 meters of altitude there is a strip called “arid coastal area”, which represents one of the most extensive areas of the archipelago, in which carob and cacti are predominant, such as Brachycereus, called cactus of the lava, an endemic species, which is a cactus with a columnar aspect, with a height up to 60 cm, it has a yellowish youthful color, as it ages it darkens and turns gray.
On the major islands there is an intermediate area, between 100 and 200 meters of altitude, in which some species of cacti live together with evergreen vegetable formations, typical of the most humid soils. This formation is called Pisonia floribunda, from the scientific name of the dominant species, the pania, a tree that reaches the 15 meters of height, and has an interesting characteristic: its seeds are sticky, so that they remain attached on small birds that they act as a transport to guarantee the generation of new plants. Another present plant is Jasminocereus, called candelabra cactus, an endemic species, almost impossible to find cultivated, as it is a property of Ecuador that has very strict export laws. It is green in color, with thorns tending to orange and white flowers.
On the flanks of the volcanoes extends the green belt, also known with the names of the plants of the genera Scalesia and Miconia, evergreen species, among which grow mosses, fungi, lichens, liverworts, climbing plants, broiliaceae and also some species of orchids . Finally, in the highest areas of the Galápagos is the area of ​​the pampa, characterized not only by the presence of grasses but, above all, by numerous species of ferns.

Fauna –
The Galápagos are home to many species, many of which are endemic.
Among the crustaceans:
– Grapsus grapsus (Linnaeus, 1758), a decapod crustacean belonging to the Grapsidae family.
Among the Reptiles:
– Conolophus subcristatus, the terrestrial iguana of the Galápagos.
– Amblyrhynchus cristatus, the marine iguana, the only one in the world to feed in the sea, and the only known species of the genus Amblyrhynchus.
– Chelonoidis abingdonii, the Galápagos giant tortoise, from whose name in Spanish, galápago, the archipelago takes its name.
– Chelonia mydas, the green turtle, thought to be an endemic subspecies of these islands, the Galápagos green turtle.
Among the Birds:
– Spheniscus mendiculus, the Galápagos penguin, the only penguin to live at the equator.
– Phalacrocorax harrisi, the cormorant of the Galápagos.
– Sula nebouxii, the blue-footed gannet.
– Pelecanus occidentalis (Linnaeus, 1766), the brown pelican, a bird of the Pelecanidae family.
– Butorides sundevalli, the lava heron, also known as the Galápagos heron, is a species of heron endemic to the islands of the same name.
– The 13 species of the subfamily Geospizinae, colloquially called Darwin’s finches, including Camarhynchus pallidus, the woodpecker finch. Each species has evolved a different beak in relation to its ecological niche.
– Buteo galapagoensis, the Galápagos buzzard or Galápagos hawk, discovered by Charles Darwin in 1835 when, on his famous journey around the world, he dwelt precisely in that archipelago.
Among the Mammals:
– Arctocephalus galapagoensis, the fur seal of Galápagos, the only fur seal to reproduce in tropical waters.
– Zalophus wollebaeki, the sea lion of the Galápagos.
– Otaria flavescens, the South American sea lion, reaches the Galápagos from colder seas following the Humboldt current.