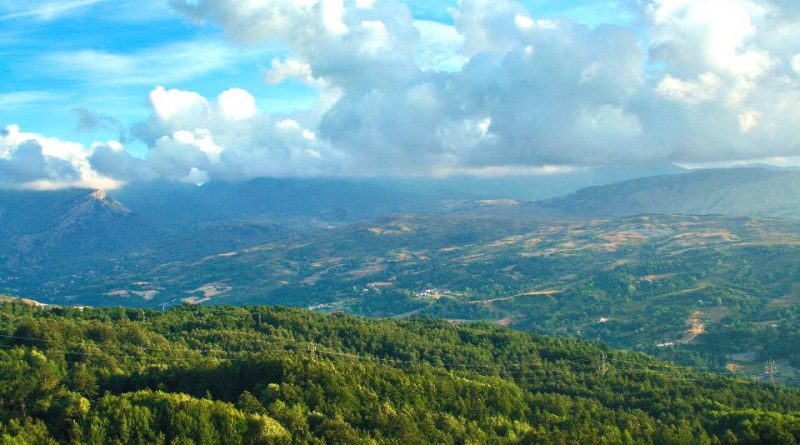 The Pollino National Park, whose identification codes are: WDPA 63052 and EUAP 0008, is a large Italian protected area of ​​new institution.
The Pollino National Park covers 192,565.00 hectares of land and is located between two regions, Basilicata and Calabria. In addition, its territory ranges from the Tyrrhenian Sea to the Ionian Sea, from Cozzo del Pellegrino to Serra Dolcedorme, from the Piani di Campolongo, from Novacco, and from Lanzo, to the Piani del Pollino, from the Argentino and Abatemarco rivers to the gorges of Lao and Raganello. to the Peschiera and Frido streams.
The entire area of ​​Pollino is formed by the Massicci del Pollino and the Orsomarso. The mountain range that is part of the southern Apennines on the border with Basilicata and Calabria boasts the highest peaks of southern Italy which remain snow-covered for a long period starting from November and ending in May with the melt of the first snow. The height of its peaks reaches an altitude of 2,200 meters above sea level.
Between the peaks of Dolcedorme and Cozzo del Pellegrino and the horizons that are drawn on the waters of the Tyrrhenian and the Ionian, along the Calabrian-Lucanian mountain massif of Pollino and Orsomarso, Nature and Man weave millennial relationships that the Park Nazionale del Pollino, established in 1993, preserves and protects under its emblem, the loricato pine.
The natural area that enjoys a wide prestige is composed of dolomitic rocks, limestone bastions, fault walls of architectural origin, cliffs, very deep gorges, karst caves, volcanic timpe, swallow holes, plateaus, meadows, pastures at high altitudes, moraine accumulations, glacial cirques and erratic boulders.The territory of the Park comprises a total of 56 municipalities, 24 of which in Basilicata (22 in the province of Potenza and 2 in the province of Matera), and 32 in Calabria (province of Cosenza).
The municipalities in the Lucan area are: Calvera, Castelluccio Inferiore, Castelluccio Superiore, Castelsaraceno, Castronuovo di Sant’Andrea, Carbone, Cersosimo, Chiaromonte, Episcopia, Fardella, Francavilla in Sinni, Latronico, Lauria, Noepoli, Rotonda, San Costantino Albanese, San Giorgio Lucano (Mt), San Paolo Albanese, San Severino Lucano, Senise, Teana, Terranova di Pollino, Valsinni (Mt), Viggianello.
The municipalities in the Calabria area are: Acquaformosa, Aieta, Alessandria del Carretto, Belvedere Marittimo, Buonvicino, Castrovillari, Cerchiara of Calabria, Civita, Francavilla Marittima, Frascineto, Grisolia, Laino Borgo, Laino Castello, Lungro, Maierà, Morano Calabro, Mormanno, Mottafollone, Orsomarso, Papasidero, Plataci, Praia a Mare, San Basile, San Donato di Ninea, Sangineto, San Lorenzo Bellizzi, San Sosti, Sant’Agata di Esaro, Santa Domenica Talao, Saracena, Tortora, Verbicaro.
The Pollino National Park is an immense area to safeguard Italian nature and biodiversity. Habitats and ecosystems are present in which innumerable species of flora and fauna can live and reproduce.

Flora –
The Pollino National Park enjoys the variability of some environmental factors and this allows the development of different plant species. The Mediterranean maquis, above all present in the warmer areas, is mainly composed of Laurel, Cisto female, Corbezzolo, Erica, Fillirea, Lentisco, Mirto, and Rosemary. At high altitudes there are mainly oak, chestnut, maple and hornbeam trees. At 1,200 meters, beech dominates, which is the most widespread plant in the Park and there are different types depending on the height. On some slopes there is a mixture of Beech and Silver Fir. Between 900 and 1850 meters or even at lower altitudes there are special beech associations. In a small clearing on the edge of the Acquafredda plain, a group of beech trees offers a spectacle that really leaves tourists stunned. Over time, a group of these trees has taken on a twisted shape, so much so that they are called “serpent trees”. Among the tree species are the black pine, the badger, the holly, and the maple. 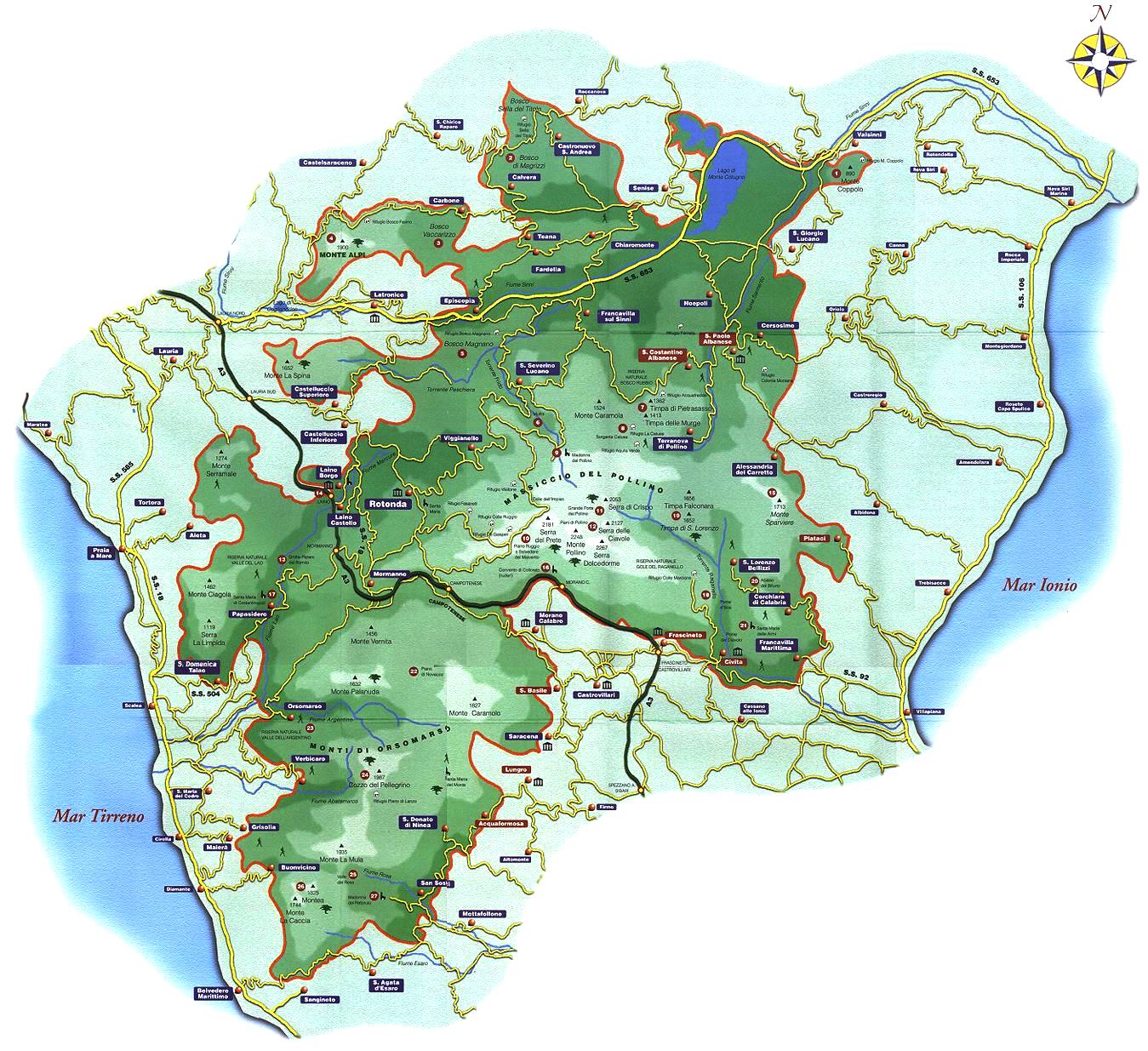 Fauna –
The Fauna of the Park also offers a wide range, represented by different species and breeds. In general the territory is inhabited by a heterogeneous fauna where there are elements of warm fauna, temperate fauna and cold fauna. Among the predatory mammals, the Wolf appears in the first place and is present in the Park with 20/30 specimens. Difficult to meet, you can see its footprints in the snow. The roe deer instead is a species that dwells in the Pollino with about 50 specimens and is one of the native species of the Southern Apennines. Between the end of the nineteenth century and the beginning of the twentieth century, the cutting of the woods decimated the Capriolo breed and to extinction the Cervo breed. The Otter is the rarest mammal in the Park and is linked to aquatic environments such as the Lao river, the Argentino river and the Peschiera stream. The Fox is instead an animal that easily crosses along the roads or along the paths and is a very widespread species like also the Riccio, while the Tasso and the Istrice even if widespread are difficult to see. In the meadows and at high altitude there are the Hare, the Faina, the Weasel, the Dormouse, and the very rare Calabrian Driomio. The squirrel that has had a good reproduction in recent years is easy to find in the forests of Faggio, Abete and in the reforestation pine forests.
Among the important birds of prey we find in the first place the golden eagle and the Capovaccio which, recently, have been re-sighted.
Followed by the Astore, the Biancone, the Peregrine Falco, the Gheppio, the Nibbio brown, the Poiana, and the Sparviere, Among the nocturnal birds of prey there are: the Allocco, the Barbagianni, the common Owl and the presence of the eagle owl is confirmed (Bubo bubo). Thanks to a policy of protection of the Fauna the Pollino enjoys the presence of these wonderful creatures.
The most common birds are the black woodpecker, present only in Basilicata, in Calabria and on the Alps, the Coturnice, the Quail, the snipe, the partridge, the goldfinch, the crow, the magpie, the jay, the imperial raven.
Amphibians and reptiles include the Spotted Salamander, Salamandrina Tergidata, Ululone with a yellow belly or also called Bombina variegata, Biacco, Cervone, Leopardian Colubro, Natrice dal collare, and Ramarro. The viper is also present in the Hugyi variety which is very dangerous. Fish such as the brown trout and numerous insects are also widespread. Finally we must mention the Curculionids which are beetles considered an endemic species of the Pollino.