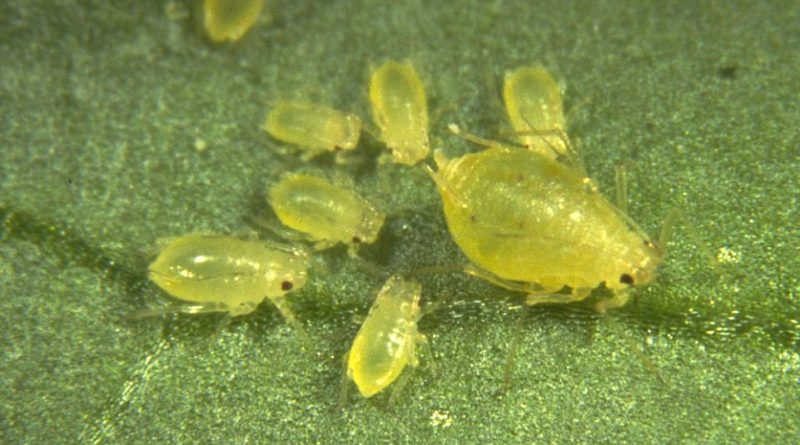 The green peach aphid or green peach louse (Myzus persicae (Sulzer, 1776)) is a small aphid belonging to the Aphididae family.

Geographical Distribution and Habitat –
The peach green aphid is present in every continent, with the exception of Antarctica, where the climate is not favorable to the growth of the host plants of the Myzus persicae. This aphid lives mainly on the green parts of Pesco, but depending on the environmental conditions and able to adapt to other plants, always belonging to the Dupracee, such as the Almond, the Apricot and the Cherry. In the summer and in the case in which adaptation problems persist, the Myzus persicae moves on herbaceous plants that take the name of secondary hosts; they can be of various species, but most of the time they are common herbs or crops, such as Chard, Potato and Tobacco, which are rich in sugars and other nutrients. Most likely it is of Asian origin and was imported into the Mediterranean along with Pesco around the fourth century BC by the Macedonian empire, following the conquest of Persia. Myzus persicae prefers a temperate, warm and dry climate, in which wind and rainfall are limited.

Morphology –
The Myzus persicae is a small green Aphid (about 2 mm). The insect is covered with a thin green tegument. The body is stocky and pear-shaped and consists predominantly of the abdomen, which is voluminous due to the development of the internal genital organs and the apparatuses dedicated to the life of the animal. It is clearly visible the presence of a siphon which is a prolonged organ, placed at the end of the abdomen, capable of producing waxy substances that solidify on contact with air: it is used by the Myzus persicae to trap the predator that is at its Chase. In case of further danger, it can also emit an alarm pheromone, to warn the rest of the colony of a present threat and causes them to move away.
A last structure is called codicola, it is triangular in shape and has the function of removing the honeydew produced (a sugary substance that is expelled from the rectum).
The aphid has a narrow head where, in addition to being three ocelli and a pair of compound eyes, two long threadlike antennas develop along the whole body. The buccal apparatus is pungent sucking with jaws and jaws that have been transformed into stilettos, which they are placed in the lower lip, which acts as a wrapper and is called a rostrum. The insect sucks the elaborate sap placed in the cribrose tubes (through the maxillary alimentary stiletto) and releases a type of coagulate saliva (through the maxillary maxillary stiletto) that isolates the buccal stilettos from the internal parts of the plant; moreover, it introduces into the phloem a second type of saliva that induces the development of the green parts and the formation of galls and pseudogles, which form a nest for the eggs of aphids.
It has three pairs of ambulatory legs that develop in the thoracic part of the insect and allow it to move quickly. Most individuals are atteri, that is, without wings; these grow only at certain generations and are structured in different ways: the first pair of wings grows in the mesothoracic area and are sclerified in the proximal part (ali emielitre); while the second pair is positioned in the metatorace and is of membranous type.

Attitude and biological cycle –
The green peach aphid completes a dioecious or heteroic cycle on the Stone fruit, in the period between spring and early summer, and on herbaceous plants (wild or cultivated) during the summer; at the end of the season (September-October) it returns to the Drupacee. This Aphid winters, on the primary host, at the egg stage; this is blackish in color and is placed at the base of the gems. At the end of winter, generally in March, the foundresses appear who at the beginning of flowering begin to reproduce parthenogenetically. The foundresses originate some (from 3 to 4) generations of foundations that infest Pesco until the beginning of the summer. Around June, migrants appear who gradually abandon primary guests to take herbaceous plants (secondary hosts), where they carry out a series of summer generations of virginogenies. At the end of the summer-early autumn (September-October) they report to the primary guests to lay their eggs in winter; in this period we have:
– sessupare winged who migrate to the Peach tree originating the female amphigonic;
– sessupare atteras that remain on the secondary host where they originate the male winged amphigonic; this, later, reaches the females on the Peach tree and fertilizes them.

Ecological Role –
The Myzus persicae carries out its biological cycle on various host plants: Peach, Almond and to a lesser extent other Drupacee (primary guests); secondary guests are spontaneous and cultivated herbaceous (Potato and other Solanaceae, Tobacco, Chard and others).
Myzus persicae can be considered the most dangerous aphid of Pesco. The damage, which is noticeable on the Peach tree, is manifested by a marked crumpling of leaves and shoots; on these organs it causes developmental arrest with subsequent necrosis of the organs themselves. In summary, the damage is caused:
– trophic punctures of aphids that live in colonies on the lower page of the leaves;
– from the remarkable production of honeydew that smears the organs, causing a partial asphyxia as well as acting as a lens effect, accentuating burns from sunlight, and favoring the development of fumaggini.Inoltre it seems that the Aphid is also a vector of the Mosaic Virus of Peach; however, this vector role has been ascertained for other virosis of secondary hosts, such as the Potato, the Chard, the Tobacco, etc. Finally, in the case of attack on some species and cultivations of sensitive peach (nectarines), it can have a damage directly on the small fruits that are deformed in the development and also undergo a chromatic alteration; the attacks instead in the period of the flowering cause many flower abortions and therefore colatura of the flowers.
In the fight against the green peach aphid, it must be taken into account that the use of nitric fertilizers must be avoided as much as possible, making the plant tissues more tender and therefore palatable, contributing to a greater proliferation of aphids in general.
Other measures concern the need to increase the internal brightness of the plants with more adequate pruning, to decrease the company specialization with the introduction of species, shrub and tree varieties that improve the balance and the biocoenosis of insects.
To carry out the treatment it is first necessary to assess whether the intervention threshold is exceeded.
The methodology involves a sampling that is performed on the shoots: there are about 100 shoots (or buds or floral buttons) and on them the presence of the aphid is evaluated.
The intervention thresholds are:
– in prefioritura: 3% of infested organs or presence of foundresses on green tips or on floral buttons;
– after flowering: 10% of the infested organs – in post-flowering, for sensitive species and cultivars (nectarines), the threshold of 3% of infested organs is maintained. Moreover we must also take into account the presence of his natural enemies as predators and parasite ides; among these we remember:
– Coccinellidi beetles: Adalia bipunctata, Coccinella septempunctata and C. decempunctata, Harmonia conglobata, Scymnus sp., Exochomus sp .;
– Antocorid rincoti: genera Orius and Anthocoris;
– Crisopidae Neuroptera: genera Chrysopa and Chrysoperla; – Diptera Sirfidi: Syrphus spp., Scaeva spp., Episyrphus spp.; – Diptera Cecidomidi: Aphidoletes spp .;
– Hymenoptera Aphidids: Aphidius spp .;
– Thrombidid mites.
Finally, the role of the microbiological struggle is remembered with the help of parasitic fungi, such as the Entomophtora fresenii, in France, and the Verticillium lecanii, in England. The treatments are carried out with:
– specific assets;
– non-specific effects.
In cases where there is a reasonable presence of foundresses on the green tips in pre-flowering, or in situations of poor efficacy (also due to phenomena of resistance) of Carbamate insecticides, an intervention with Pyrethroids can be performed.
The preventive type of struggle, which is however carried out in high-risk areas and certainly following a poor agronomic setting in the orchard, is carried out on species and cultivars that are particularly sensitive; the treatments are performed in prefioritura, in the phase of the “pink buttons”.