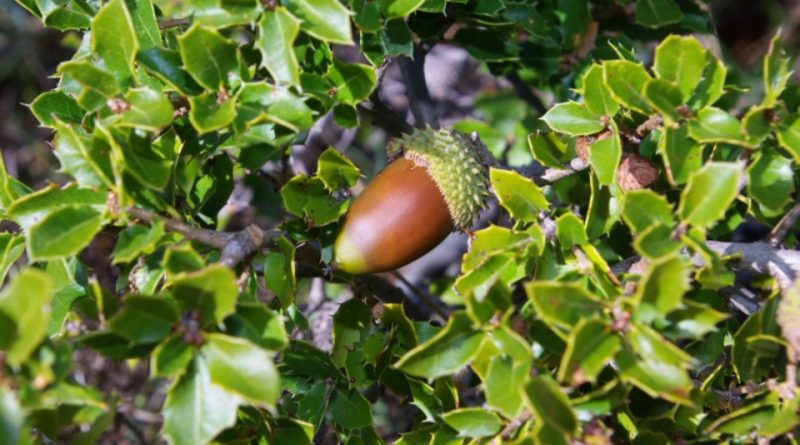 The spiny oak (Quercus coccifera L., 1753) is an evergreen shrub species of the Fagaceae family.

Systematic –
From the systematic point of view it belongs to the Eukaryota Domain, Kingdom Plantae, Magnoliophyta Division, Magnoliopsida Class, Fagales Order, Fagaceae Family and therefore to the Quercus Genus and to the Specie Q. coccifera.
The term Quercus calliprinos Webb is synonymous.

Etymology –
The term Quercus comes from quercus, which was the Latin name of the oak, a plant sacred to Jupiter. The specific coccifera epithet is controversial, according to some authors is linked to the cochineals (Kermes ilicis) from which the species is in fact attached, in the warm areas, and from which a red dye is extracted; according to others it comes from cóccum hazel, berry, cuddle and féro I bring: that produces cuddles.

Geographic Distribution and Habitat –
The Spiny Oak is a plant native to North Africa and south-eastern Europe, with an area that extends along the coasts of the entire Mediterranean basin. Vegeta in the Lauretum warm from the sea level up to 300/500 meters of altitude, in the Mediterranean scrub of the Oleo-Ceratonion and in the garrigues linked to the degradation of the evergreen Mediterranean forest.
In Italy it is present in all the southern regions, with the sole exclusion of Campania and sporadically in Sicily (although more present along the north-western coast, especially in the Palermitano), Sardinia, Puglia, Calabria and Liguria (even if the reports are ancient and in the part of Nice, now French territory). 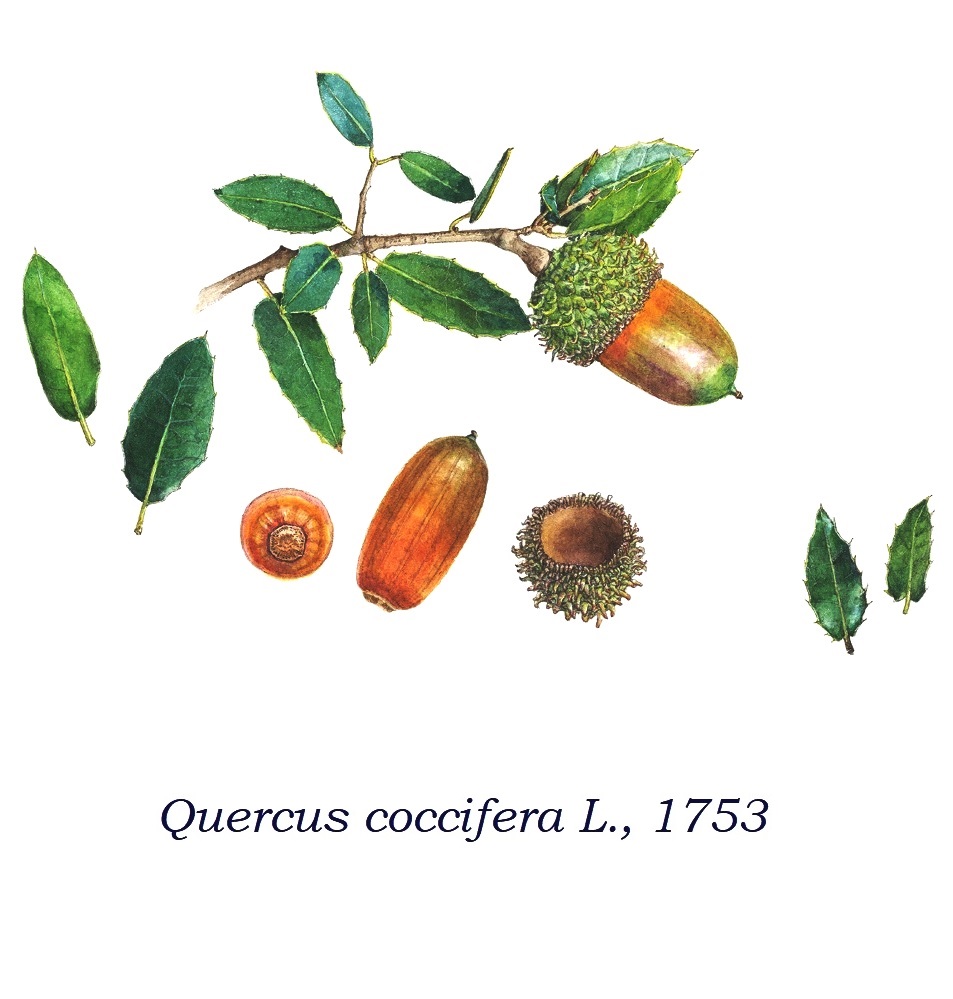 Description –
The spiny oak is a shrubby species with bushy and irregular foliage that can reach 2-4 meters in height. It has a tortuous and twisted stem, branched from the base, with a wrinkled brown-gray rind and longitudinally furrowed. The leaves, of 2-4 cm, which have a leathery and leathery consistency, of a more or less intense green color, glossy and glabrous on both sides, are persistent, ovoid in shape and with toothed undulating margins and very pronounced spines; they are also equipped with a short petiole. The spiny oak is a monoecious plant with unisexual flowers; the male ones are gathered in yellowish pendulous catkins, while the female ones are solitary or united in small groups. It produces 2-3 cm ovoid-shaped acorns with a dome covered with spiny scales.

Cultivation –
The thorny oak, typical of the most arid Mediterranean maquis, grows on stony, poor, steep soils, but where it is possible it prefers fertile, deep, clayey and more or less heavy soils without particular requests in terms of pH. It is a species that tolerates limestone and strong winds, but does not tolerate maritime exposure. It is not a rustic plant, but can withstand temperatures of -15 ° C.
As with all oaks, Quercus coccifera also propagates by seed as soon as it is harvested, directly outdoors, protecting the sowing site from rats and squirrels. The acorns can only be preserved if a certain humidity is guaranteed, since if they dry out they lose their vitality immediately. The seedlings must be planted very early (within the first two vegetative seasons), because the root system of the Spiny Oak is highly intolerant to the disturbance, so much so that it has been found that the best specimens are always those sown directly in situ.

Uses and Traditions –
Quercus coccifera is a plant that can populate areas with poor, stony and dry soils in certain environments. The very hard wood is used as firewood. In the past a scarlet red coloring was extracted from the dried and pulverized adult females of an insect (Chermes vermilio) which lives on the branches of the spiny oak.
This plant, for its beauty especially as a shrub, is ideal in those sites of medium-small size, where the climate allows it, along with other shrubs with similar climatic and edaphic needs. Beautiful as a single specimen or in groups. It is an ideal plant in the creation of Mediterranean gardens, which gives it its typical landscape feature.
It is a very useful species in natural gardens where it can provide nourishment to wildlife and even a sheltered place where to hide.
The Quercus coccifera can also be confused with the juvenile forms of the holm oak (Quercus ilex). The main distinguishing feature is the hairiness, in fact the holm oak has the leaves (at least the younger ones) covered in the lower page by a thick garment of white hairs, which makes them visibly discoloured (green superiorly, white inferiorly), instead in Quercus coccifera the tomentum is almost absent or is present (but less dense) also on the upper page and is gray-yellowish in color. In the adult habitat the two species are clearly differentiated by their bearing, height development, the morphological characteristics of the acorns, in particular the domes.
Remember that Quercus coccifera enters into symbiosis with Tuber Melanosporum or Precious Black Truffle.

Preparation Mode –
Quercus coccifera, in addition to ecological and ornamental uses, has no particular food or pharmaceutical uses. Once the “grain of Kermes” was used in dyeing as dye, derived from the pulverization of cochineal. It was also used in liquor with the name “alchermes”.