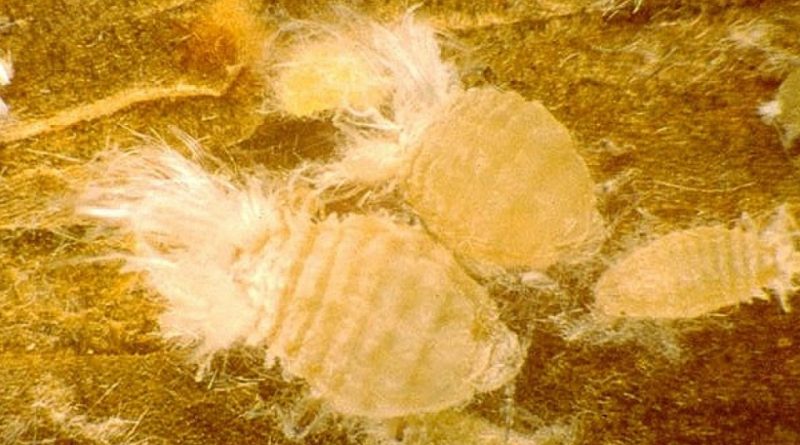 The Afide lanige of the poplar (Phloeomyzus passerinii Sign.) Is a small Aphid belonging to the Aphididae family.

Geographic Distribution and Habitat –
The Afide lanigero of the poplar lives exclusively on the poplar, developing over 10 generations in the course of the year and is widespread in practically all areas where this plant grows or is grown.

Morphology –
The Afide lanigero is a small greyish aphid, more or less intense depending on the stage of development, which lives in colonies; these colonies infest the stem and the large branches of the Poplar.
The Attack virginopares have a yellowish-green body covered with waxy secretion, antennas with 5 or 6 articles. Body length 1.90 mm. The winged virginoparas have the body with brown head and thorax and for the rest of hazel-like appearance all covered with wax. Thorax with hyaline wings that differentiate brownish veins. Abdomen with pore-shaped siphons and very short subtriangular codicles. The length with wings is 2 mm.
The colonies are covered with a whitish waxy secretion, with a woolly appearance, which highlights the same infestations on the attached organs.

Attitude and biological cycle –
The Afide lanigero del Poplar winters at the adult female stage, sheltering in the ravines of the plant rind. In spring it resumes activity originating a number of spring-summer generations that oscillate on average between 10 and 15; these generations always take place only on the wooden organs of the Poplar. In July the young nymphs cease to grow and take shelter in the cracks of the trunk and roots to spend the winter. This period has rarely elapsed from durable eggs, because the presence of the anfigonici is unusual.
The insect’s saliva exerts a toxic action on the cortical tissues bringing them to death together with the underlying woody ones; in fact the damage is determined by the trophic activity of the aphids that occurs on the bark; the attached cortical tissues react to the inoculum of saliva, which contains toxic substances, deforming slightly, forming necrosis with slight cancerous lesions both to the rind and partly detached, and to the subcortical tissues. The plant attached shows a slow but progressive deterioration of the aerial part and a greater receptivity to the pathogens of wood (Caries and Cancers).
The climatic conditions are decisive for the attack of the Afide lanigero del Pioppo; in particular the temperature and relative humidity of the air. The most serious attacks lead to the collapse of part or of the whole plant, often followed by the breaking of the stem by the wind. It is also emphasized that the poplar “caroliniani”, for example, possess a high resistance to the aphid, while the “Canadians” are generally sensitive. In addition, it is necessary to avoid, as far as possible, shading and poor ventilation that are created when the hair comes into contact.

Ecological role –
The fight against the Phloeomyzus passerinii must take into account the type of plant and for the purposes of growing poplar. In production for rapid growth, unfortunately it is often used also synthetic nitric fertilizers that should be banned as they make plants more susceptible. The direct struggle is carried out in the spring towards the month of May and taking into account the productive context in which it operates (nursery or poplar grove); the execution technique foresees a sampling that determines the presence of possible new infesting colonies which can cause a massive explosion of the phythage.
The treatments are directed to the woody organs (stem and branches) that must be well wet. You can do treatments only with white oils or, in case of severe infestations, activated with phosphorganics. These treatments, considering that these aphids are also subject to predation / parasitism, must also take into account the possible presence of a useful biocenosis that is able to contain the explosion of epidemics.
When you are facing “Canadian” poplars you must intervene at the first appearance of the colonies, when they are still not protected by a thick waxy blanket.
Among the best known clones are ‘Lux’, ‘San Martino’, ‘Neva’, ‘Dvina’ and ‘Lena’ resistant. On the other hand, the very widespread ‘I 214’, ‘BL Costanzo’ and ‘Boccalari’ are sensitive. The cultivation of resistant clones is recommended in areas most frequently subject to parasite infestations.