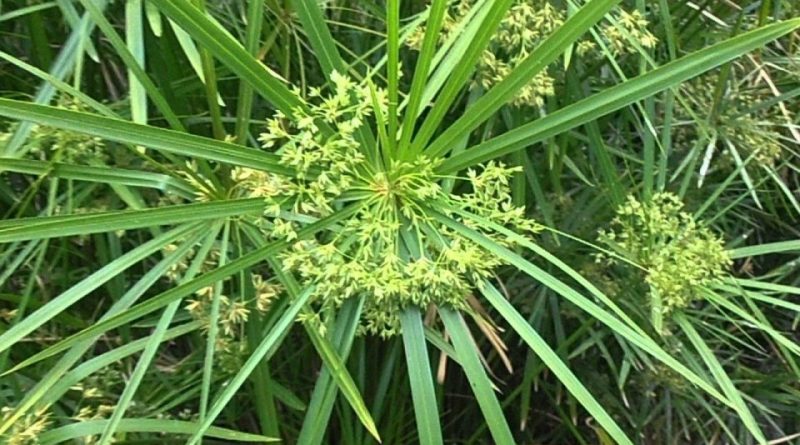 The Egyptian papyrus (Cyperus papyrus L.) is a swamp species belonging to the Cyperaceae family.

Systematic –
From a systematic point of view it belongs to the Domain Eukaryota, Kingdom Plantae, Division Magnoliophyta, Class Liliopsida, Order Cyperales, Family Cyperaceae and then to the genus Cyperus and to the species C. papyrus.
The terms are synonymous: Cyperus elapsus Chiov., Cyperus syriacus Parl., Cyperus papyrus subsp. siculus Chiov ..

Etymology –
The term Cyperus comes from the Greek κύπειρος cýpeiros rush with edges, cipero, papyrus. The specific epithet papyrus derives from the Greek πάπυρος pápyros, in turn derived from the Copt nâpirop.

Geographic Distribution and Habitat –
The Egyptian papyrus is a species originally from an area located between Syria, Palestine and Africa. , the habitat of this plant is the marshy lands where the large creeping rhizomes from which the stems depart. 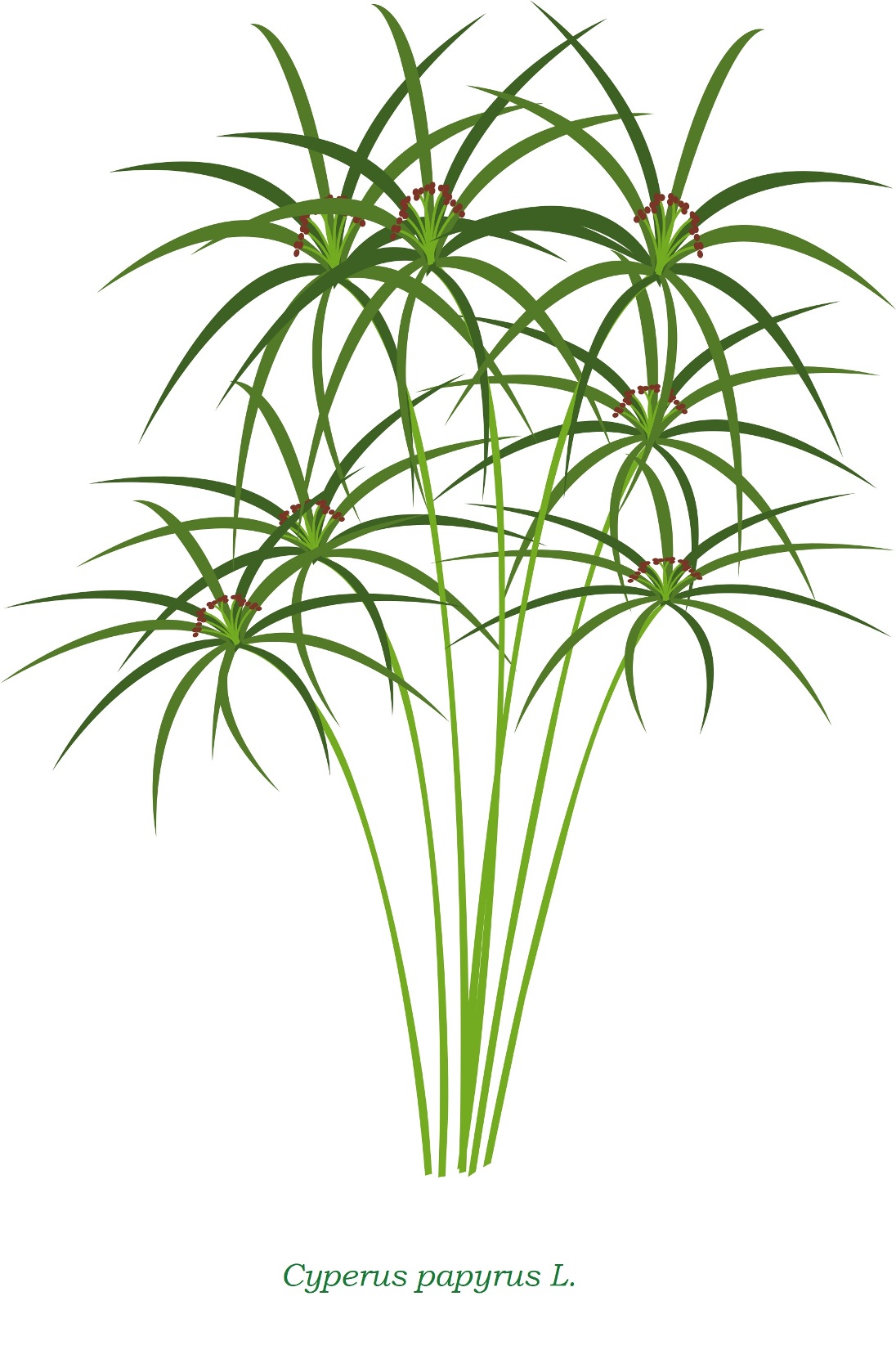 Description –
The Cyperus papyrus is a perennial, evergreen and delicate species with stems (calamuses or culms), surrounded at the base by enveloping sheaths without leaf blade, which can reach 2-4 m in height, with a triangular section that bring flowers to the top, free from wrapping and inconspicuous, but gathered in spikes compressed forming a showy umbellate with 10-30 cm long rays.

Cultivation –
Cyperus papyrus is a perennial lover of light, which grows in areas with high temperatures, along the banks of slow-flowing waterways, with submerged roots. The plant can be reproduced by cuttings from the rhizome and the stem. The division of the rhizomes is done in spring by immersing in water an inverted apical tuft from which new shoots will be issued. For details of the cultivation technique refer to the following sheet.

Uses and Traditions –
The papyrus plant has been known and used by man since ancient times. The most ancient name of this plant is byblos, deriving from that of the ancient Phoenician city of Byblos who was trading it. Hence the meaning of “book” (as in the Bible, library, etc.).
The earliest information on its use dates back to the first dynasty of Egypt (about 3000 BC). It was used, as well as ornamental essence, for the production of textile fibers and material for the construction of rudimentary boats. The most important use, however, was the production of a very resistant type of paper, obtained from the marrow of the stem. From the findings found there are many uses: the marrow was used as food and source of textile fibers, flowers to make garlands, the rhizome as fuel and the most robust parts (roots and stem) for pots, tools, footwear, rigging if not even boats (as Thor Heyerdahl amply demonstrated with his navigations aboard the Ra and Ra II in 1969-1970). The Egyptian papyrus was also very present in religious rites. In Lower Egypt, in fact, the papyrus was a symbol of fertility, fertility and regeneration; the plant was offered as a gift to the Egyptian gods during religious and funeral processions. At the British Museum in London it is possible to see Ani’s papyrus (datable in 1420 BC), in which Ani and his woman are depicted while offering the sacrificial gifts to the gods in order to access the presence of Osiris. The papyrus in the hands of the wife symbolizes the rebirth of the future.
To obtain the surface on which to write, several layers of marrow strips were properly glued.
In the papermaking process, papyrus was harvested and the thin bark was removed after cutting the calamis. The marrow was then cut into thin strips, placed on a wooden board, side by side parallel to each other. Subsequently another plane was created superimposed on the latter in which the fibers were always arranged parallel to each other but at 90 ° with respect to the underlying layer. The process, repeated several times, made it possible to form a thick mesh that was finally covered with a linen cloth and crushed; in this process the fibers were mixed together with each other creating delicate rectangular sheets. These were then dried in the sun before being used. Often more sheets were glued with water and flour to produce rolls of up to ten meters long.
It can be said that on the papyrus was written the history of Mediterranean civilizations of antiquity (the introduction of the parchment dates back only in the second century and its diffusion to the V).
But the uses of the papyrus, as mentioned, were not limited to the preparation of the surface on which to write or paint. The ancient Egyptians fed on raw papyrus, boiled or roasted. They ate their roots and drank their juice. A similar use was made in Syracuse, where the papyrus was brought from immemorial times, with the difference that here the shepherds extracted from the tenderest part of the plant, or from the marrow, the sweetish juice.
Unfortunately, over the centuries the papyrus has undergone a considerable decrease in the spread and the areas where it grows so much that in Egypt this plant has almost completely disappeared and so, at the end of the last century it was the papyrus of Syracuse to come to the rescue of the Egyptian one to adorn the Cairo museum).
Today the papyrus is cultivated mainly for ornamental purposes.

Preparation Mode –
Although the Egyptian Papyrus (along with other species) is now grown for almost exclusively ornamental purposes, this does not detract from the value and potential of this plant for other uses. Papyrus can be used in the kitchen to get papyrus, jam, liquor, sweets, spaghetti, ice cream, yogurt, and other uses. Even in cosmetics it can have interesting uses like that of soaps and face masks.