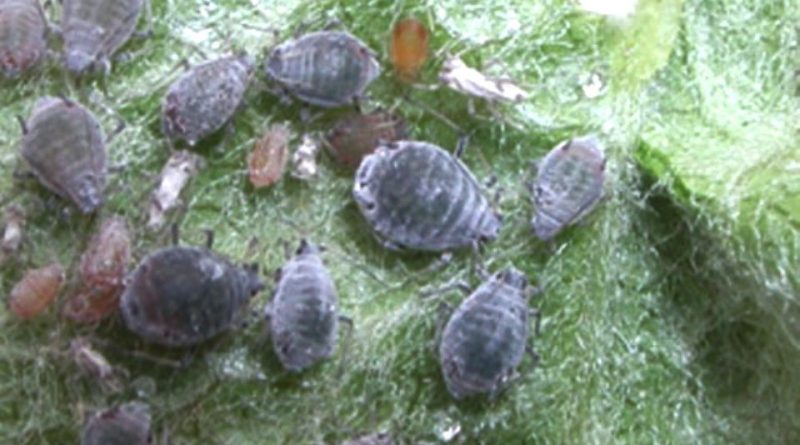 Geographic Distribution and Habitat –
The Dysaphis plantaginea is a very cosmopolitan aphid present in temperate areas and in habitats with the presence of the apple tree that is the primary host and plants of the Plantago genus that are instead secondary hosts.

Morphology –
The Dysaphis plantaginea is recognized because the adults have a dimension of about 3 mm, with gray-violet color and covered by a grayish waxy layer with the typical powdery and pruinose appearance. The individuals of the juvenile stages are clearer, of a tendentially rosy color, living in colonies on the shoots and under the leaves.

Attitude and biological cycle –
The Rosy apple aphid is one of the aphids that create more problems for apple crops. It is an insect with a dioecious cycle in which the apple tree is the primary host and plants of the Plantago genus are secondary guests.
The biological cycle is characterized by the aphid that winters, on the apple tree, at the egg stage, which is blackish in color, and which is deposited on the branches of the host plants.
In the period between March and April, the parthenogenetic founders born that give rise to generations of foundatrigenie (up to 3-5 generations) always on the plant of Melo. The founders give birth to the nymphs directly. These generations grow on the shoots up from the budding and continue until the period of June and sometimes even in July. Then the first winged migrants appear on the secondary host (Gen Plantago), where they carry out some generations (always parthenogenetic) summer.
Between the end of the summer and the beginning of autumn, the sessupare are formed and migrate back to the primary host (Melo), on which the anfigonici originate; the females of these will lay the eggs destined to winter.

Ecological role –
The Dysaphis plantaginea, with its nutrition bites causes serious and irreversible leaf crumple; the symptoms are identifiable as deformations and arrest of development occur in the shoots, with consequent loss of the “animal”. This aphid also pricks other organs, such as: fruit and fruit in the setting phase. The bites on the flowers determine flower abortions and dripping, while on the fruit-trees serious malformations are soon evident, they remain smaller and therefore of less or no commercial value. To the described damage the abundant production of honeydew must be added that damages the vegetation either directly (asphyxia and slow effect with burns) and indirectly, due to the establishment of the fagots (saprophytic mushrooms) that cause a photosynthetic decrease of the leaves and, on the depreciation fruits . Furthermore, as with other aphids, a symbiotic relationship is established with the ants protecting and spreading them.
The fight against the gray aphid of the apple tree must be preceded in advance by the careful application of agro-ecological techniques in the design phase of apple trees.
In fact, with an excessive specialization of plants, lack of grassing, excess of nitric fertilization, lack of hedges that can accommodate its natural antagonists, it will then be very difficult to contain this aphid, which has a very low intervention threshold.
For this reason, even if the fight against the Rosy apple aphid seems only chemical, this is a road with no way out for the whole ecosystem, aggravated by the fact, as mentioned that, due to its dangerousness, the intervention must be carried out with very low presence thresholds.
Therefore, in the conditions of orchards, not predisposed, to a series of precautions during the design phase, the interventions must be made in a preventive way or at the appearance of the founders, in pre-flowering or at the end of the flowering (fall of the petals), as the biocenosis its natural antagonists will not be able to contain this aphid within tolerable limits. As regards monitoring the presence of Dysaphis plantaginea, in the phases following the bunches, up to the walnut fruit, it is advisable to sample the shoots; the intervention is convenient even with the sole presence of one or a few mobile forms, or with damage from honeydew.
To reduce the population, however, it is advisable to always facilitate, with the above techniques, its natural enemies, even if, it must be said, they often can not control high populations of the plant, both for its very low damage threshold and for the dyscrasia of biological cycles (natural enemies are present in mass only at the beginning of summer, when the greatest damage has already been done).
Although early spring treatments are not particularly harmful to the useful biocenosis it is always advisable to intervene, possibly with insecticides of natural origin (such as pyrethroids) with the addition of Marseille soap.
Among the natural enemies of the gray apple tree we remember:
– Coccinellid Coleoptera (predators): Adalia bipunctata, Coccinella septempunctata and C. decempunctata, Scymnus spp., Harmonia conglobata and others;
– Chrysopid Neuroptera: Chrysopa carnea;
– Ditteri Cecidomidi: Aphidoletes aphidimyza;
– Ditteri Sirfidi, excellent predators, at the larval stage, of Aphids;
– Parasitoid hymenopterans of the genus Ephedrus and Aphidius;
– Predatory mites of the genus Allothrombium.
That is why in the insecticidal treatments carried out in the spring-summer months we must take into account not only the possible presence of these natural enemies but also insects that can suffer the action of the insecticide such as sirfids, bees and pollinators in general.