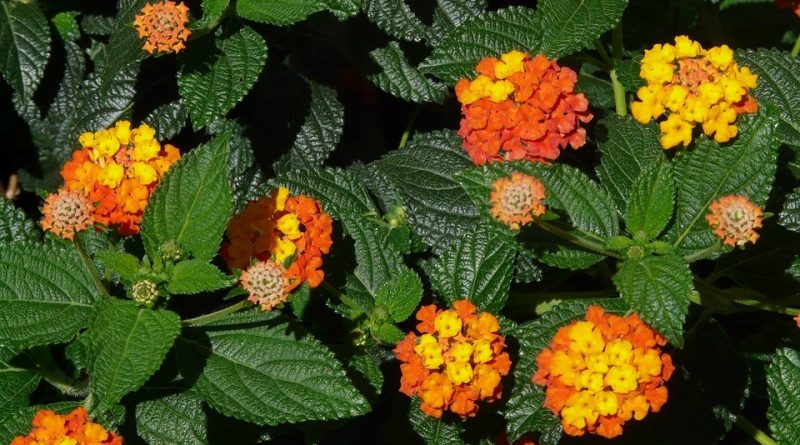 Systematic –
From the systematic point of view it belongs to the Domain Eukaryota, Kingdom Plantae, Magnoliophyta Division, Magnoliopsida Class, Order Lamiales, Family Verbenaceae and therefore to the Genus Lantana and to the Species L. camara.

Etymology –
The term Lantana comes from bending, curving, probably due to the considerable flexibility of its branches. The specific epithet camara is the vernacular name used in South America for this species of Lantana.

Geographic Distribution and Habitat –
The Lantana camara is a native species of central America and South America and has been introduced into other parts of the world as an ornamental plant; due to its ability to free itself it is considered a weed in many tropical areas. 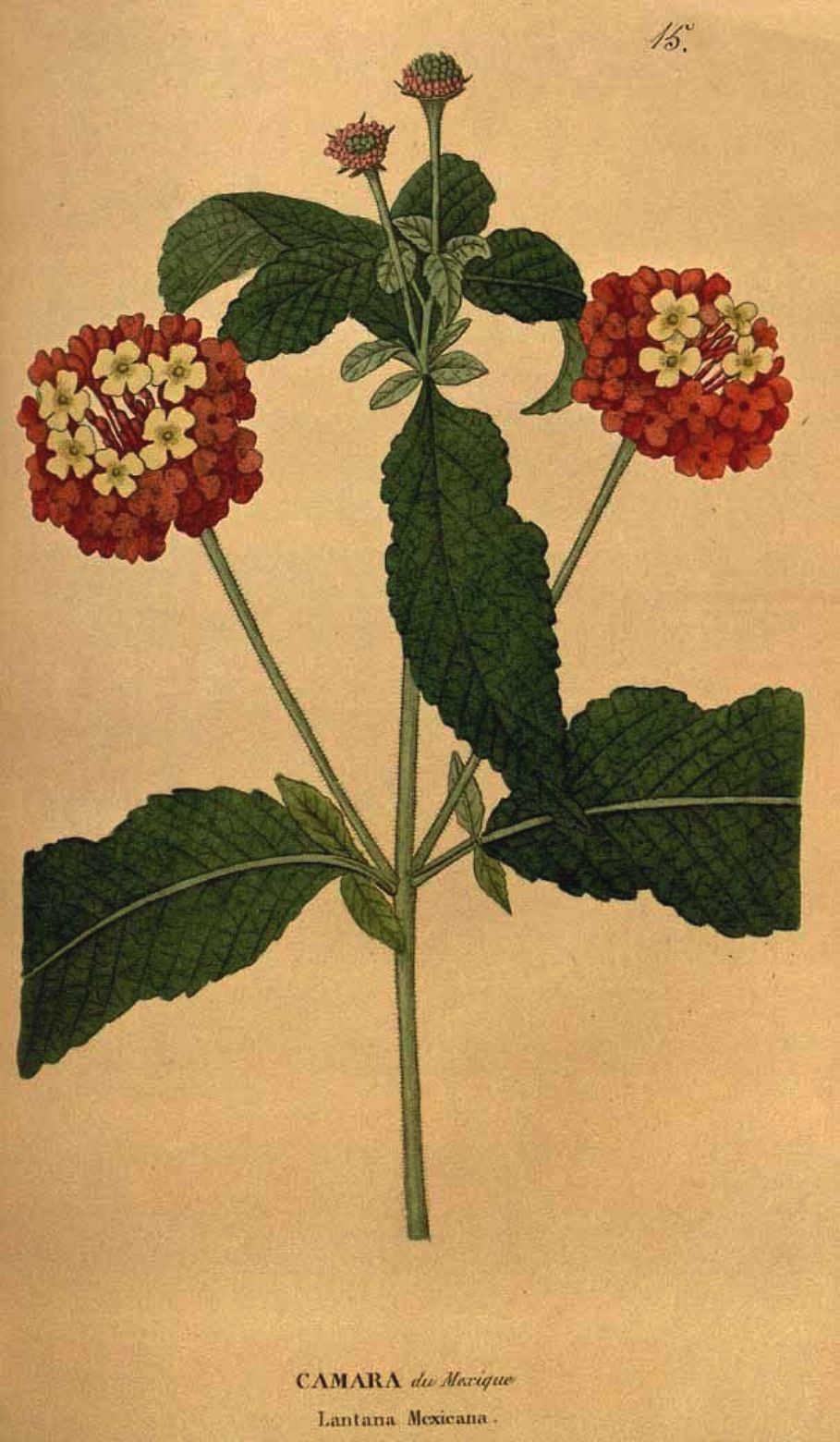 Description –
The Lantana camara is a shrub-like, perennial plant, which can reach varying heights from 40 cm to 2 m and has elliptic leaves, dark green, with an unpleasant odor. The flowers are tubular, gathered in globose corbi, about 5 cm wide, at the axils of the leaves. The color of the flowers tends to darken as the days go from white to yellow to brick red. Flowering occurs between May and August.
The fruit is represented by a toxic drupe of 4-7 mm in diameter, spherical, green then maturing blackish or bright black, from the fleshy mesocarp, woody endocarp with two monospermi pits, seeds without endosperm.

Cultivation –
The Lantana camara needs an ideal temperature during the winter period of 6-10 ° C. With too high temperatures, the plant wanes and becomes easy prey to pests. The cultivation must take place with good lighting, even in full sun, to avoid however in the months and in the hottest hours, especially if in the presence of poor ventilation. It is a species that requires abundant irrigation in summer and moderately in winter. It grows better in more humid areas. It grows in dry soils but prefers a rich and humiferous soil. For the multiplication we proceed with the sowing in February, at the temperature of 16 ° C or with the multiplication by cuttings that is carried out taking in August portions of young branches, of the length of 8 cm., Which will be put to root in the multiplication box at the temperature of 15-18 ° C. The cuttings thus obtained are left to harden in 8 cm pots. in diameter (filled with a compost based on garden soil, peat, sand and soil) until February-March, when they must be pruned to facilitate the formation of the branches. They are transplanted in the final pots in spring. As for pruning, in reality the lantana does not require a real pruning. You can resort to a shortening of the longer branches (up to 10-15 cm in length) in overdeveloped specimens, to be carried out in February. For details of the cultivation technique, the following sheet can be consulted.

Uses and Traditions –
Lantana camara is an invasive species that has covered vast tropical countries, in India as well as in Australia. It colonizes new areas when its seeds are spread by birds. When it arrives in an area, this species spreads rapidly, so that efforts to eradicate it often fail. The Lantana camara is a fire-resistant plant and grows fast by colonizing the burnt areas. In Southeast Asia it has become a serious obstacle to the natural regeneration of important species.
Although considered a pest in Australia, the plant provides shelter for several native marsupial species and also offers the habitat for the native bee Exoneura, a vulnerable species that nests in the hollow stem of the plant.
The Lantana camara, since its introduction has characterized many ecosystems of Africa, as in the highlands of Kenya and the mountains of Cape Verde where it grows in many areas regardless of the amount of rainwater received. It can be found along the paths, in desert areas as well as in the vicinity of farms. It has been included in the list of the 100 most invasive alien invasive species in the world.
The Lantana camara is also cultivated as an ornamental species and by hedges or flower beds, especially in areas where, due to the limitation of water availability, it still manages to give good coverings and blooms.
On the market there are different varieties among which we remember: “Crocea”, with flowers that become sulfur yellow from sulfur yellow; “Cloth of Gold”, with bright yellow flowers; “Mutabilis”, which produces flowers that go from white to yellow to pink and lilac; “Rose Queen”, with flowers that turn yellow into pink; “Spreading Sunset”, characterized by a prostrate posture and by flowers that, initially yellow, then become reddish; “Snow White” with white flowers.
From its branches it is sometimes possible to make interwoven brooms.
Lantana is not only an ornamental plant but also important for its medicinal properties. In fact, it has beneficial principles that find many herbal applications. The smell that emanates keeps mosquitoes and other insects away, which makes it useful to be placed near homes.
The gemmoderivato of lantana (Viburnum lantana) is a natural remedy used to treat allergic asthma and is able to exert a soothing action on the pulmonary neurovegetative system and to inhibit bronchial spasms. Infusion of its inflorescences has anti-inflammatory properties and is perfect for treating flu and cold symptoms such as cough, sore throat and difficulty breathing. Lantana is rich in beneficial active ingredients that can be exploited for the treatment of various diseases and common pathologies of medium and mild. Its main constituents are: tannins, phytosterol, phytosterolin, organic acids and viburnin.
The latter, in particular, is the bitterest and most medicated principle of the plant and is concentrated above all in the leaves and berries. By virtue of these substances, lantana has strong astringent, refreshing, spasmolytic, antiallergic and sedative properties. The berries have an incredible laxative effect and are rich in vitamin C, which is precious to support the immune system.
In ancient times, an infusion of flowers and leaves of this plant was considered the ideal remedy to combat flu symptoms or to alleviate muscle spasms and an upset stomach. Even today, in Africa, this drink is given to children to calm abdominal pain and colic.
Its beneficial effects are appreciable above all in the care of the gums and many diseases affecting the respiratory system, including asthma, bronchitis and dyspnoea. Lantana is also used for the treatment of hemorrhoids, constipation, diarrhea and to alleviate the symptoms of pyorrhea.
Beware of the dark (drupe) berries of the plant that can cause skin irritation and liver injury. They are toxic to humans and pets and should not be swallowed for any reason.

Preparation Mode –
In the past, the flowers and leaves of Lantana were used to prepare infusions useful to relieve the symptoms of influenza, or to control muscle spasms and fight stomach ache.