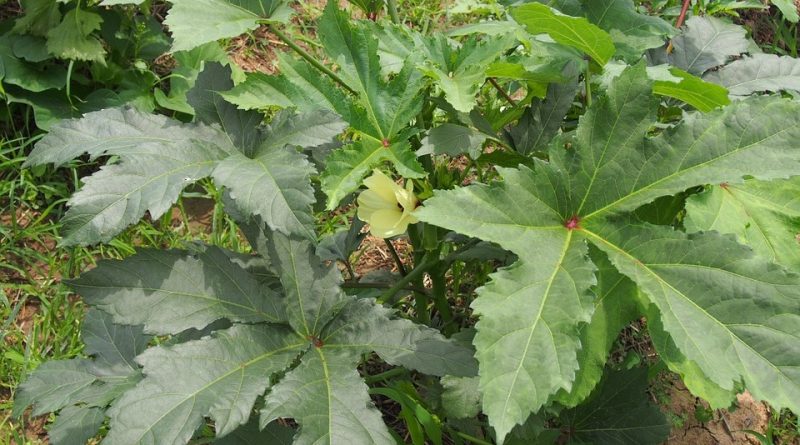 The okra (Abelmoschus esculentus (L.) Moench) is an herbaceous species belonging to the Malvaceae family.

Systematics –
From the systematic point of view it belongs to the Domain Eukaryota, Kingdom Plantae, Suborder Tracheobionta, Division Magnoliophyta, Class Magnoliopsida, Order Malvales, Family Malvaceae and therefore to the Genus Abelmoschus and to the Specie A. esculentus.

Etymology –
The term Abelmoschus comes from ab u-l-mosk, the Arab name of the plant which means father (source) of the moss, because of the seeds that smell of moss and are used to produce the essential oil of musk. The specific epithet Esculentus derives from food bait, food: mangereccio, edule, edible.

Geographic Distribution and Habitat –
Abelmoschus esculentus is a species whose spontaneous forms are not known. The geographical origin of the okra is controversial; some argue that its origin is in South Asia, others of Ethiopian origin and West Africa. 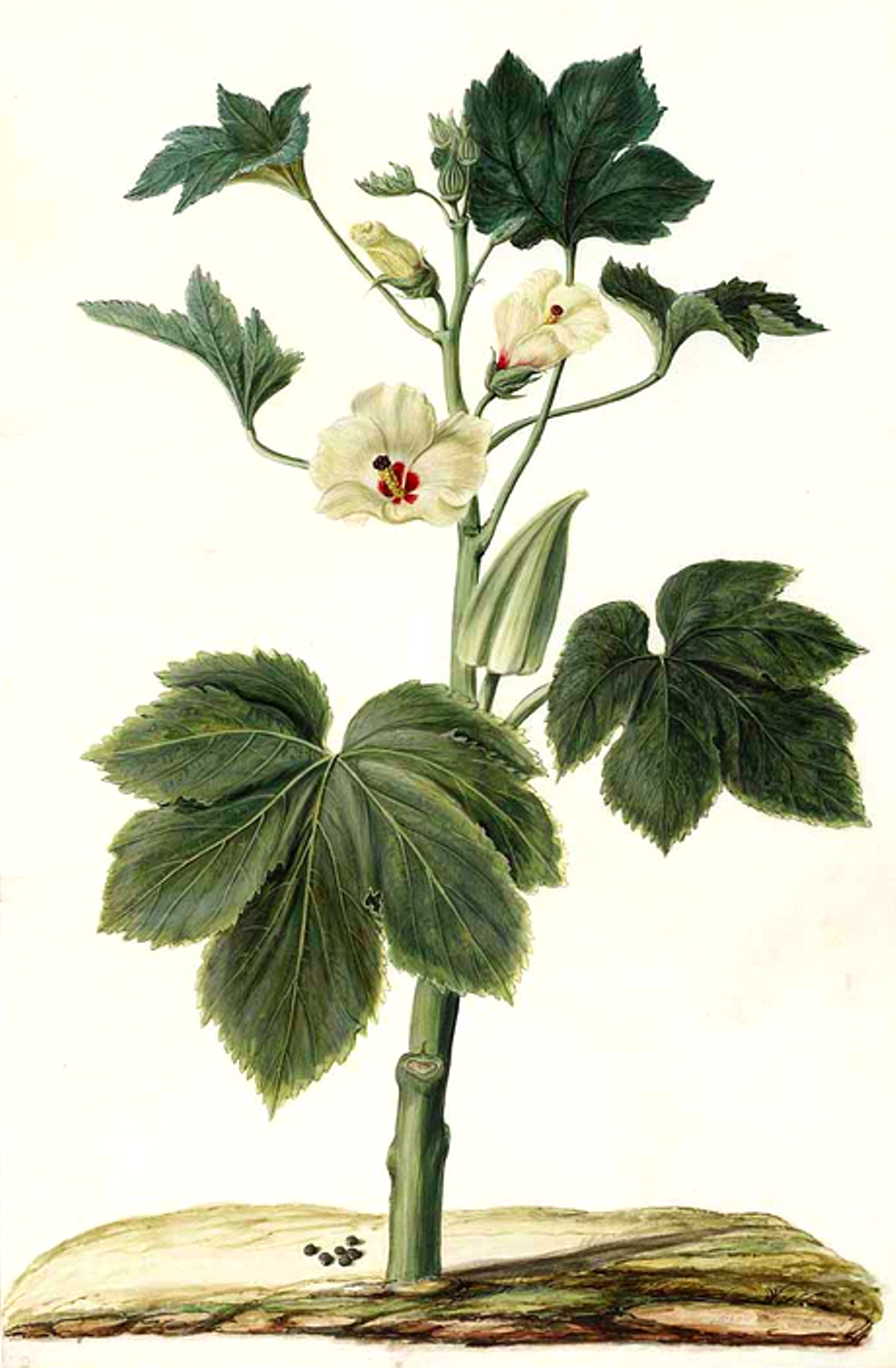 Description –
Okra is a perennial herbaceous species, often grown as annual in temperate climates, which can grow up to about 2 meters in height. The leaves are 10-20 cm long and wide, lobed and palmate with 5-7 lobes. The flowers have a diameter of 4-8 cm with five white or yellow petals, often with a red or purple stain at the base of each petal. The fruit is a capsule up to 18 centimeters long with a pentagonal section, containing numerous seeds.

Cultivation –
The Abelmoschus esculentus is grown in the tropical and warm temperate regions of the world for its fibrous fruits or fruits containing round and white seeds. It is one of the plant species most resistant to heat and drought and will tolerate clayey soils with intermittent humidity, but can withstand the frost that can damage the fruits. In cultivation, the seeds are immersed during the night before planting at a depth of 1-2 centimeters. The seedlings require a lot of water. The fruits quickly become fibrous and woody and, to be edible, must be collected when they are immature, usually within one week of pollination. For the cultivation technique, the following sheet can be consulted.

Uses and Traditions –
The Egyptians and the Moors of the 12th and 13th centuries called this plant with the Arabic name bamya, suggesting that it had arrived in Egypt from Arabia, but first it was probably brought from Ethiopia to Arabia. The Abelmoschus esculentus could have entered South-Western Asia through the Red Sea or the Bab-el-Mandeb directly into the Arabian peninsula rather than north through the Sahara or from India.
One of the first stories on the plant is a Spanish moro who visited Egypt in 1216 and described this species cultivated by the locals who ate their tender and young fruits.
From Arabia, subsequently, the plant has spread to the shores of the Mediterranean Sea and to the east. At the discovery of America, the plant was introduced to the new continent by ships that used to trade in slaves. We must arrive in 1658, when its presence was registered in Brazil. Its presence was later documented in Suriname in 1686. The Okra may have been introduced in South-East North America, directly from Africa, at the beginning of the eighteenth century. In 1748, it was already cultivated up to the northernmost areas of Philadelphia. Thomas Jefferson noted that it was now a permanent crop in Virginia in 1781. In the 1800s this cultivation was common throughout the southern United States and the first mention of several cultivars was in 1806.
The okra is also cultivated in Eastern European countries and in Italy, where the largest area cultivated is in Sicily with 90%.
The raw okra contains 90% water, 2% protein, 7% carbohydrates and a negligible amount of fat. The raw okra is rich in dietary fiber, vitamin C and vitamin K, with moderate contents of thiamine, folate and magnesium.
The okra and many malvaceous stems are macerated and processed to provide a textile fiber known as okra fiber.

Preparation Mode –
Okra is widely used in Indian cuisine and in Cajun cuisine (an ethnic group made up of descendants of the French-speaking Canadians from Acadia and deported to Louisiana). It is also present in Bulgarian, Greek, Lebanese, Bosnian, Albanian, Brazilian, Turkish, Japanese, Filipino, Romanian and Ghana cuisine.
To cook this plant, first of all, you have to check its top. If the okra is young it does not present hair; otherwise, after having rinsed it, rub it carefully. To avoid it becoming too clammy when cooking, it is best to let it soak in water and vinegar.
At this point, we have a wide range of possibilities. It can be inserted into stews which the Creole tradition offers us numerous examples, such as gumbo. Care should be taken in the case of slow cooking, as it is better to leave it whole, otherwise it risks making the preparation too viscous.
Always left whole can be stuffed and gratinated in the oven, or battered (preferably with corn flour) and fried.
Cut into slices it can instead be cooked in a pan, grilled or steamed. It requires short cooking times – no more than 5-10 minutes – and, with its delicate flavor, lends itself to being inserted into spicy and spicy preparations: it can also be accompanied by plenty of garlic and onion, curry and red pepper.