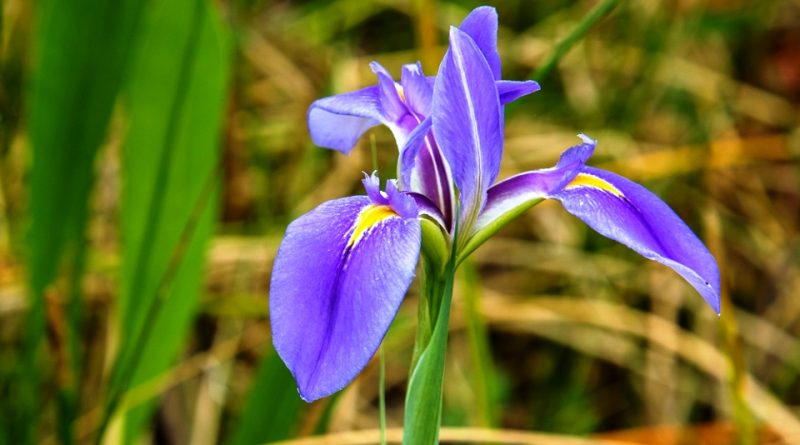 The prairie iris (Iris savannarum Small) is a herbaceous species belonging to the Iridaceae family.

Etymology –
The term Iris of the genus was dedicated to Iris Iris (Ἶρις Iris in Greek mythology), messenger of the gods whose name derives from that of the rainbow (ἶρις iris).
The specific savannarum epithet probably comes from savannah, a predominantly subtropical and tropical biome located between 10 and 20 ° latitude (N and S) and characterized by a dry season and a wet season.

Geographic Distribution and Habitat –
Iris savannarum is a typical plant of the southeastern United States, in particular in Alabama, Georgia and Florida. Its main region of distribution is in Florida, where it dominates other iris species, and is found in many small to medium-sized colonies in many places in the state.
Its habitat is that of open freshwater marshes but it also loves soils rich in clayey sand and those poor in sandy clay, and is tolerant of both wet soils all year round and dry ones all year round. 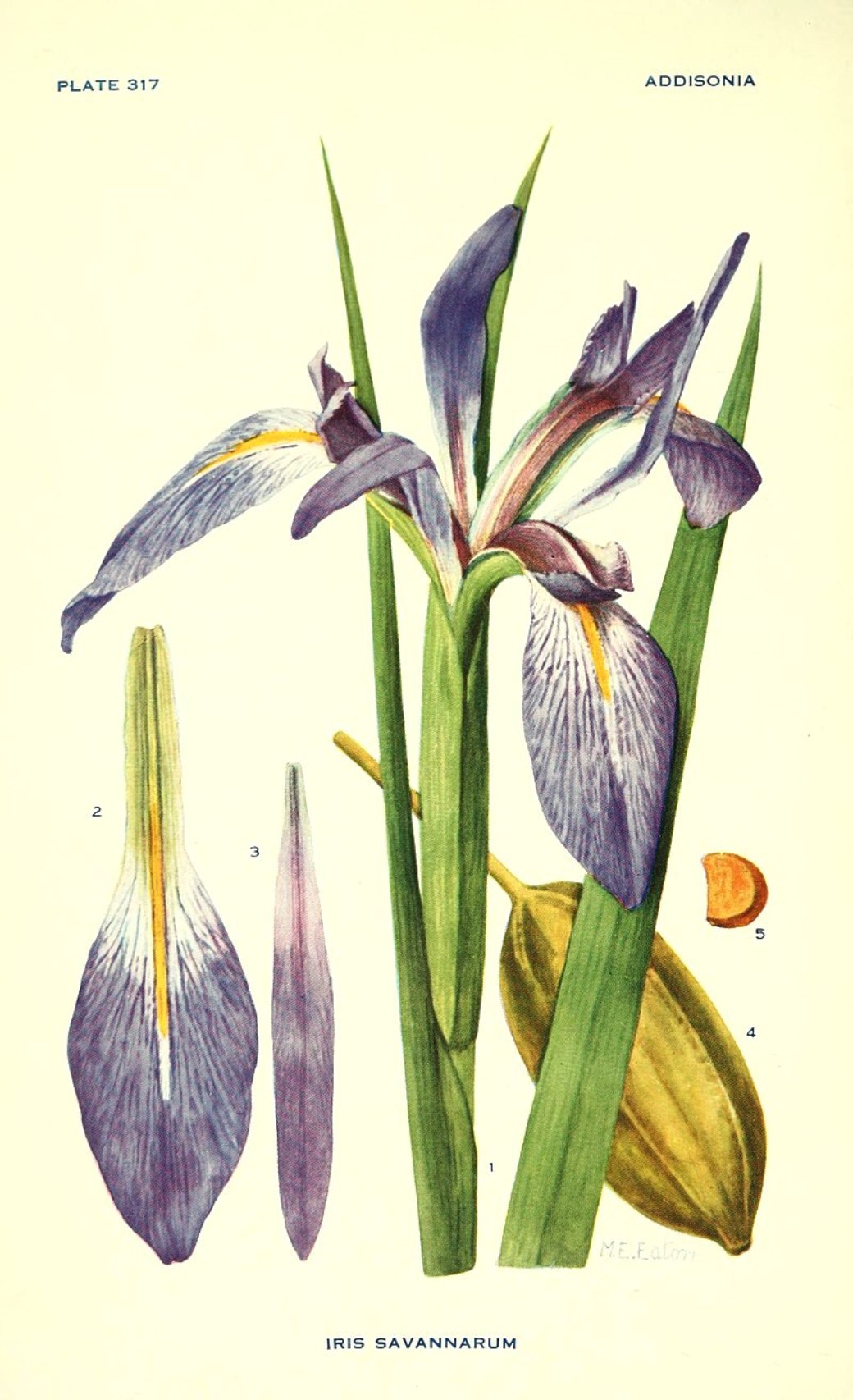 Description –
Iris savannarum is a rhizomatous perennial herbaceous species with 30-100 cm long stems.
The plant grows from a greenish rhizome of 2–2.5 cm in diameter, with the fibrous remains of the leaves of the last season, which easily branches, forming large open tufts or colonies.
The rhizome is poisonous to humans.
The leaves are bright green, rising from the base of the plant (about 60-100cm long by 0.8-2cm wide). These usually die after the plant has stopped blooming.
The flowers have colors ranging from blue to purple-blue to white. The white form was originally called Iris albispiritis, until it was reclassified as a synonym for Iris savannarum.
The perianth tube is 1.2-1.5 cm long. The sepals are blue or pale purple, flecked with white and have deep blue veins (on either side of the central ridge). They are about 7–8 cm long. The central crest is yellow with a light green claw.
Iris blooms between spring and summer, generally between March and April and has between 1 and 3 flowers per stem.
The flowers are pollinated by insects, especially bees. The iris flower has a small flap that protects the stigma, which prevents self-pollination. When a bee lands on the flower to collect pollen, it skims the flap, heading towards the anther. The bee collects pollen from the anther and deposits pollen from other flowers. On leaving, he touches the edge of the stigma, closing it again.
The fruit is a capsule containing ellipsoid seeds of bright green color and about 6-10 cm long. This has 6 sharp, wing-like, equidistant crests that converge to form a robust beak at the apex of the capsule. Inside are seeds of brown color, circular or diamond-shaped (8-12 mm in diameter). The seed capsules can be very heavy, due to the flower stems, which therefore bend towards the soil or water (depending on the habitat). The seeds are then released from the capsule, if released near the water they will float (due to a cork-like coating). They can also drift in the wind to create new colonies.

Cultivation –
Iris savannarum, like all marsh irises, ends its vegetative cycle in summer, becoming more yellow, but regains its vigor in autumn, remaining green throughout the winter until spring.
All the varieties of marsh iris are excellent plants for the phytodepuration of the pond.
It is a plant to be grown in little water (maximum at a depth of -5 cm) or on the edge outside the pond as long as the soil is soaked with water.
It is a frost-resistant plant.

Customs and Traditions –
Iris savannarum was first published by Small in Addisonia in 1925.
It was later classified by various Iris authors (including R. C. Foster, “Contributor to Gray Herberium”. 119: 3–82. 1937) as a variety of Iris hexagona, and called Iris hexagona var. savannarum.
In 2002, Henderson reclassified both species of Small Iris giganticaerulea (located in the Alabama coast to Louisiana) and Iris savannarum (located in Alabama, Georgia and Florida) as distinct species. Iris hexagona was then left to the populations of South Carolina and some regions of northern Florida. This was agreed and expanded by Daniel Ward in 2011 (from the University of Florida), who linked Iris kimballiae as a variant of Iris savannarum. It was later classified as a synonym of Iris savannarum.
Iris savannarum and many other ornamental plants have been evaluated for their potential use as storage plants for the treatment of soils contaminated by arsenic (As). It was found that the dry weight of the iris increased with increasing concentrations of the solution but arsenic did not accumulate in the plant tissue. Since the iris can be harvested several times a year, it is a good plant for phytostabilization.
Iris savannarum was hybridized with Iris fulva to produce Iris × cacique.

Preparation Method –
Iris savannarum has no particular food or medicinal uses while it is a very useful plant for phyto-purification plants and for soils in which arsenic has accumulated.