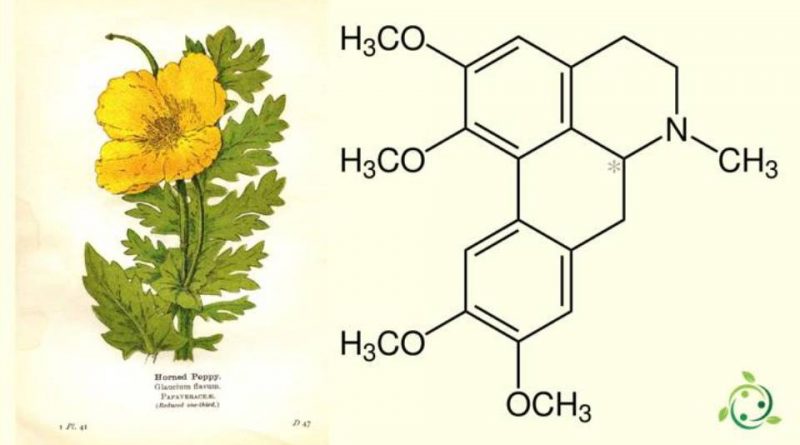 Glaucine, whose term in the official IUPAC nomenclature is: (S) -5,6,6a, 7-tetrahydro-1,2,9,10-tetramethoxy-6-methyl-4H-dibenzo [de, g] quinoline is an alkaloid.
Glaucine has a brute or molecular formula: C21H25NO4 and has been isolated in various plant species such as Glaucium flavum, Glaucium oxylobum, Croton lechleri ​​and Corydalis yanhusuo.
Glaucine has bronchodilator and anti-inflammatory properties, as it acts as a phosphodiesterase inhibitor and calcium channel blocker.
As a cough suppressant, the compound is sometimes used, mostly, in the form of glaucine hydrochloride.
Glaucine can manifest side effects such as sedation, asthenia and can be a hallucinogen capable of stimulating particularly colorful visual sensations.
This alkaloid is currently used as an antitussive agent in Iceland, as well as in Romania, Bulgaria, Russia and other Eastern European countries.
When ingested orally it has been shown to increase airway conductance in humans and has been studied as a treatment for asthma in addition to coughing.

Animal studies have demonstrated glaucine’s ability to decrease heart rate and lower blood pressure, presumably by the same Ca 2+ antagonism mechanism it uses to relax bronchial muscles. Studies of the effect of several alkaloids in mice, including glaucine, demonstrate anticonvulsant and antinociceptive properties.
These animal studies, in a nutshell, indicate that glaucine can also act as a analgesic to some extent, although its capabilities in this regard appear limited compared to other analgesics.
Finally, it should be noted that reports on the recreational use of glaucine have recently been published and the effects include dissociative symptoms; feeling of detachment in addition to the manifestation of nausea, vomiting and dilated pupils.
These reports only confirm the clinical data that, in case of intake, manifest dissociative symptoms such as lethargy, fatigue, hallucinations.