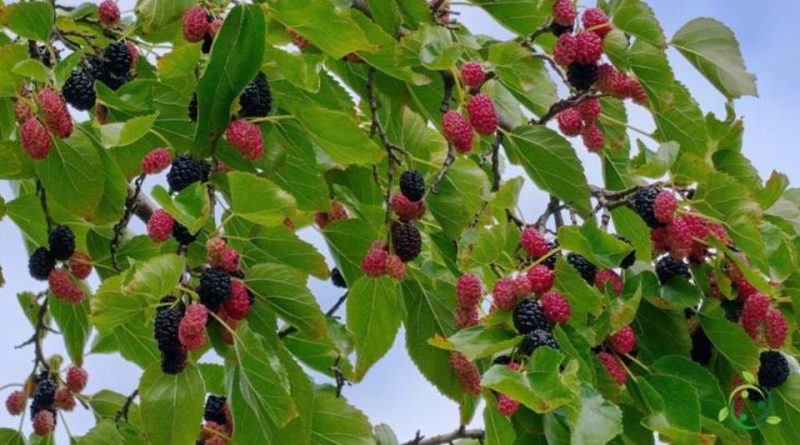 The term Mulberry refers to some plants belonging to the Moraceae family of which we mention above all the White Mulberry (Morus alba L.) which is a species native to Central and Eastern Asia and the Black Mulberry (Morus nigra L.), very much similar to the previous species. To these we must add the Red mulberry (Morus rubra L.) which is a widespread species in the central and south-eastern United States of America, it is sometimes also present in Europe and Italy because it is cultivated but in Canada it has become a rare species and endangered.
Once upon a time it was customary to plant mulberry trees in the countryside to delimit properties and to provide shade, given its thick foliage. In addition, the plant was in use associated with the breeding of silkworms, which feed on mulberry leaves.
Today, this fruit is slightly out of use, as, for commercial reasons, its blackberries (fruits) are delicate, they perish too easily to be palatable on the fruit and vegetable market.

Pruning period –
For the mulberry pruning period, we will refer above all to the first two that are the most widespread in the European and Italian cultivation areas.
For the choice of the suitable period of pruning it is necessary to wait until the branches on which to intervene are well lignified and the most suitable period is that of the end of winter, when it is possible to make the cuts for pruning called production. The right time to prune the mulberry is therefore the end of February.
It should also be remembered that on this tree the interventions related to the stimulation of production are reduced to a minimum, since the mulberry does not require special interventions and does not tend, like other fruit trees, to have alternation of production from one year to the next.
It is also specified that the mulberry bears fruit on the branches of the current year, so cutting is done for the purpose of renewal, removing branches that have already bear fruit.
For details of the pruning technique, see the following sheet.

Species and varieties –
Over thousands of years, the mulberry has adapted to a wide area of ​​areas in the northern hemisphere and is able to grow in a wide range of soil and climatic conditions. 24 species of Morus have been classified, among which the most commonly spread are the Morus alba, the Morus nigra and the Morus rubra L ..
Moreover, more than 100 cultivars are known, cultivated for the production of blackberries; some varieties of M. nigra, M. multicaulis and M. rubra have been selected. Even among the M. alba some cultivars are interesting for their black fruits (var.pendula Dippel, var.aureifolia Gamette Hative, var. Italica Spach, var. Moretti Seringe, var. Romana Loddige) or white (var. pendula Tut Badena, var.aureifolia Tsen).