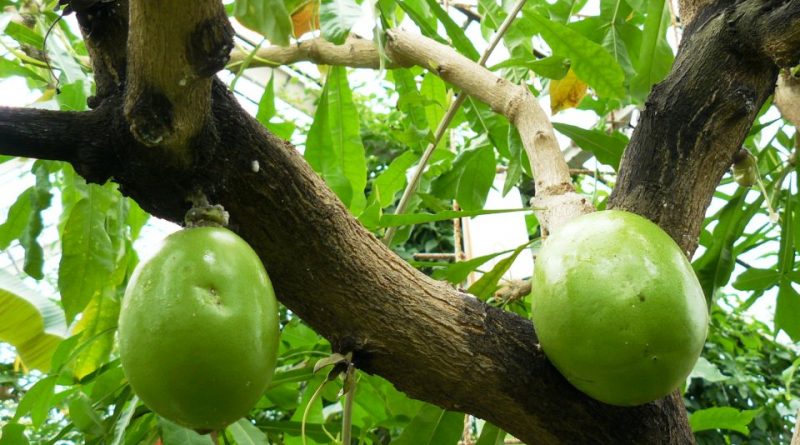 The pumpkin tree (Crescentia cujete L. 1753) is an arboreal species belonging to the Bignoniaceae family.

Etymology –
The name Crescentia of the genus was dedicated to the Italian Pietro de Crescenzi (~ 1233-1321) also known as Pier Crescenzio, philosopher and jurist, but above all a student of medicine and natural sciences, wrote the Ruralium Commodorum libri XII, an important treatise on agronomy.
The specific cujete apithet derives from the Brazilian vernacular name of this species. 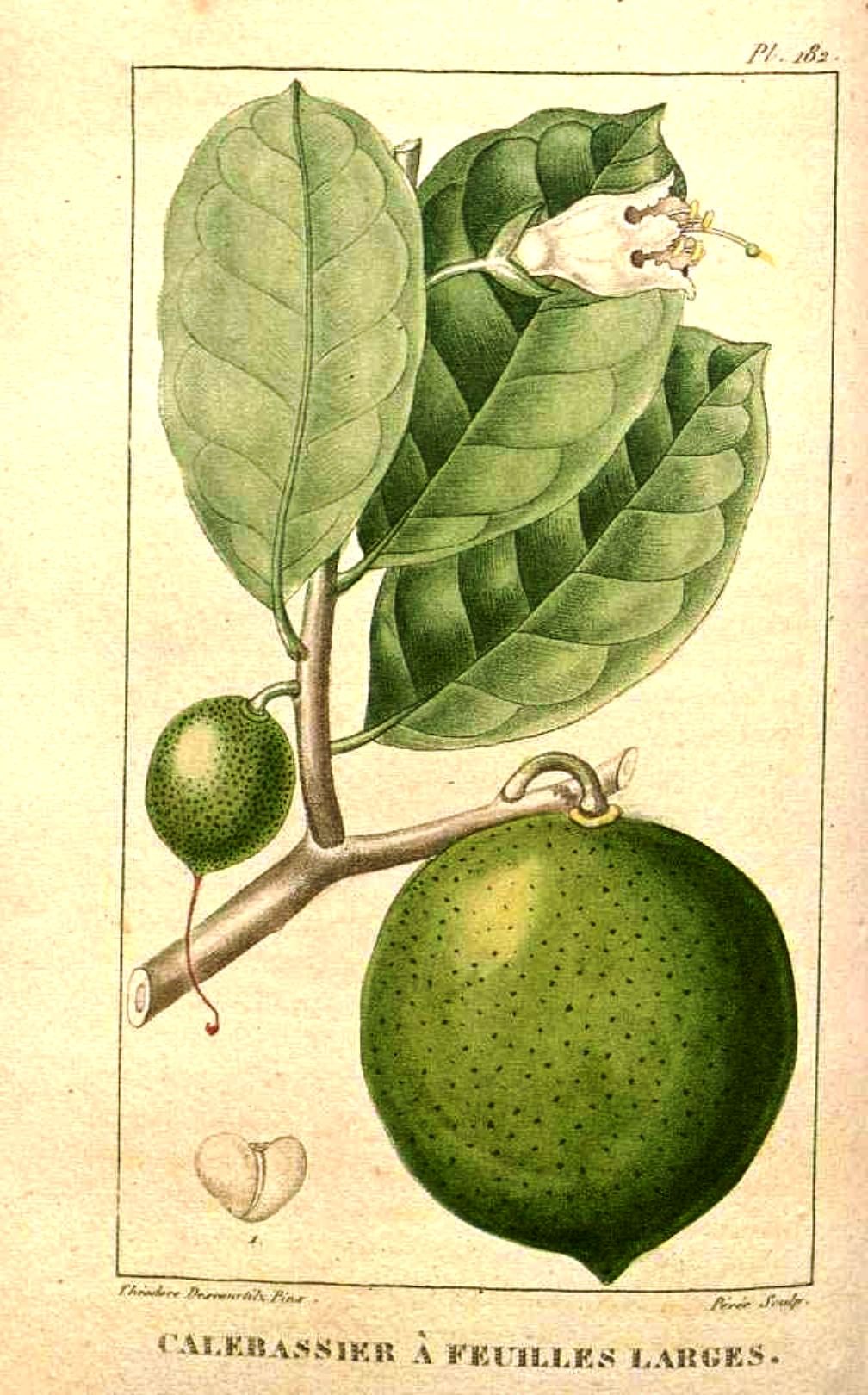 Description –
Crescentia cujete is a plant that grows in the form of a small evergreen or semi-deciduous tree, up to 4-10 m in height.
The foliage is open and irregular, with long almost horizontal branches.
The trunk grows up to 50 cm in diameter at the base and has greyish bark initially smooth, wrinkled and vertically fissured in the old specimens.
The leaves are almost sessile, alternate, simple, whole and oblanceolate to spatulate, 4-20 cm long and 3-7 cm broad; these are gathered in groups of 2-5 of different lengths on short shoots along the branches, of a glossy dark green color above, paler and opaque below.
The flowers are solitary and arise directly on the trunk and along the branches (caulifloria) on a short peduncle; these have a calyx divided up to the base into two concave ovoid lobes, 1.8-2.5 cm long and 1.2-2.4 cm broad, green in color, campanulated corolla, 5-7 cm long and 4- 6 cm of diameter, with five unequal triangular lobes with pointed apexes and wavy margins, fringed and retroflexed, of a yellowish green color streaked with purple, and 4 not very prominent stamens; the flowers, which open at night, give off an odor considered by many to be unpleasant. Pollination occurs mainly by some bats.
The fruit is a berry with a spherical to ellipsoid shape of 15-30 cm in diameter; this is initially green then yellow and finally brown when ripe, with a smooth, woody and particularly hard epicarp, about 0.5 cm thick, containing numerous dark brown flat obovate seeds, about 0.7 cm long and 0 wide. , 5 cm, edible, immersed in a poisonous white pulp that contains precursors of hydrocyanic acid.

Cultivation –
Crescentia cujete is a plant that prefers a fertile and moist soil in a sunny position. The now freed plants are very drought tolerant but do not bloom until they are large enough, after which they can bloom all year round.
In the evening the flowers give off a pungent musky scent of cabbage.
The large fruits have nectars that are believed to attract stinging ants. These ants then ward off herbivores such as goats.
The trees appear to offer a particularly good habitat for epiphytes and in nature they are often covered with orchids, bromeliads and other plants.
The plant propagates by seed, which must be sown in a soil mixed with draining material, kept humid at a temperature of 24-26 ° C, which germinates in 10-15 days, and easily by semi-woody cutting in summer.

Customs and Traditions –
The common names of this plant are: calabash, calabash-tree, gourd tree (English); calabasse, calebassier (French); pumpkin tree (Italian); coité, cuieira, cuité, cujeté (Portuguese – Brazil); árbol de las calabazas, cabeza, calabacero, cimarrona, crescencia, cujete, guacal, guira, jicaro de cuchara, maraca morro, palo de huacal, rasp guacal, tapara, taparito, totumo (Spanish); Kalebassenbaum (German).
Crescentia cujete is a very important tree in the history and customs and rituals of indigenous peoples. It was already known in pre-Columbian times for dried fruits emptied of pulp, resistant and very long-lasting, used as containers for liquids, for cups, plates, spoons, musical instruments, such as maracas, and other handicraft items, usually richly decorated.
This plant is grown in Africa, Central America, South America, the West Indies and in the far south of Florida. It is also the national tree of Saint Lucia.
In Mexico, the hardened peel of the fruit is used to make small pots to serve or drink. In Cuba, dried fruit is commonly used as a cup of coffee by rural farmers. In Colombia, dried fruit is halved and then partially filled with stones, beads, seeds, broken glass or a combination and is then used to keep the beat in bullerengue music. The dried fruit is filled with some seeds and a handle is made for making maracas in multiple Latin American countries (especially Colombia and Cuba). In western and southern Africa it is also used for decoration and musical instruments.
In the Caribbean it is mainly used to make utensils such as cups, bowls and bowls in rural areas. It can be used for transporting water or for transporting fish while fishing. In some Caribbean countries, it is worked, painted and decorated and transformed into objects by artisans and sold to tourists. For example, cups, bowls, or even a typical water pipe or “bong” are built, the pumpkin is considered consistent with the “Ital” lifestyle or vital not to use refined products such as table salt or methods of modern cooking, such as microwave ovens. In Haiti, the plant is called kalbas kouran, literally “running gourd”, and is used to make the sacred rattle emblematic of the Vodou priesthood, called the asson. As such, the plant is highly respected.
In Costa Rica, a traditional annual pumpkin dance (baile de los guacales) is held in the Costa Rican city of Santa Bárbara de Santa Cruz. Since 2000 the activity has been considered of cultural interest to the community and all participants receive a hand-painted pumpkin vase to thank them for their financial contribution (which they paid in the form of an entrance ticket).
Native Americans across the country traditionally serve chicha in pumpkin pots to attendees of special events such as the baile de los diablitos (dance of the little demons).
In some rural areas of Mexico, gourd is dried and hollowed out to make a bule or guaje, a gourd used to carry water like a canteen. The jícara fruit is cut in half, which gave the parallel name to a clay cup also called jícara.
In Brazil pumpkin bowls were used by Brazilians as utensils for serving food and the practice is still preserved in some remote areas of Brazil (originally by populations of various ethnicities, origins and regions, but today mainly by Native Americans). The fruits are also commonly used in Brazil as a resonator for berimbau, the distinctive instrument of capoeira, a martial art and dance developed on Brazilian plantations by African slaves.
Today Crescentia cujete is now cultivated, as mentioned, in various regions of the world, also as an ornamental plant for its characteristic fruits, exclusively in areas with a tropical and subtropical climate, as it cannot bear temperatures close to 0 ° C, if not exceptional and for very short period.
The wood of this plant is hard, heavy, flexible, easy to work and resistant to xylophagous insects. It is used in construction, for boats and tools of various types; a particular use of wood and bark is an excellent support for epiphytic orchids.
The seeds, rich in proteins, are edible, dried and ground used to prepare a refreshing drink. Various parts of the plant are used in the traditional medicine of indigenous populations both in the places of origin and in those where it has been introduced for some time, often naturalizing, for various pathologies; the high toxicity of the pulp must be kept in mind, which was also found to have carcinogenic activity; laboratory studies have highlighted the presence of various bioactive compounds of possible interest in the official pharmacopoeia.
In general, the fruit pulp is astringent, emollient, expectorant and laxative.
The fruit is abortive, emetic, emmenagogue, purgative and vermifuge.
A syrup made from the pulp of the fruit is a popular remedy for colds.
The juice of the fruit is used to treat diarrhea, pneumonia and intestinal irregularities. It is made into a strong tea and drunk to induce abortion, to facilitate childbirth, and is used in a blend to relieve severe menstrual pain by eliminating blood clots.
The leaves are astringent, cholagogue, emetic (in larger doses) and purgative.
Sometimes an infusion is given to treat dysentery.
They are boiled with sugar, soft fat or Buckley’s white rub to make a syrup which is used to treat colds. Juice from young leaves is drunk to treat colds and lung diseases.
The leaves are chewed to treat a toothache. They are also used as a wash to clean dirty wounds. Crushed leaves are applied to wounds to stop bleeding and promote healing. The crushed leaves are applied as a poultice for the onset of headache.
The whole plant is used as a diuretic against dropsy and diarrhea.
A decoction of the bark is used to clean wounds.
Ripe fruit pulp contains crescentic, tartaric, citric, tannic, chlorogenic and hydrocyanic acids and can cause abortion in cattle.
Seed oil contains oleic acid.
The stem bark and leaf show antimicrobial activity.
Among the other uses of this plant are those agroforestry as the plant is sometimes grown in hedges.

Preparation Method –
In addition to medicinal uses, the plant has various uses for food use.
Unripe fruits are occasionally pickled, similar to pickled walnuts. The seeds can be eaten cooked. They are also used to make a drink. A syrup and a famous package called “carabobo” are obtained from the seeds.
To make the syrup, the seeds are finely ground, mixed with sugar, a little water and then boiled.
Roasted seeds, combined with roasted wheat, are used as an aroma and flavor instead of coffee.
The leaves are sometimes cooked in soups.