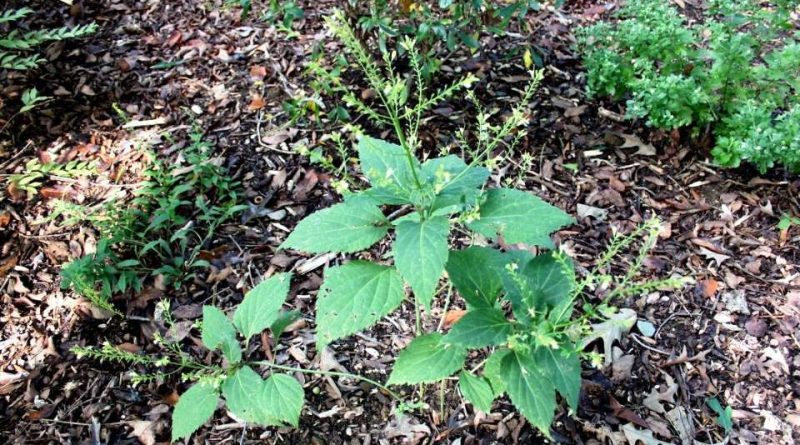 The Stone root or Horse Balm or Richweed (Collinsonia canadensis L.) is a herbaceous species belonging to the Lamiaceae family.

Etymology –
The term Collinsonia of the genus was dedicated by Linnaeus to Peter Collinson (1694-1768), an English merchant who, with his brother James Collinson, managed a trade with the American colonies and created a garden where he cultivated exotic plants.
The specific canadensis epithet refers to Canada, but sometimes used to indicate North America.

Geographic Distribution and Habitat –
Collinsonia canadensis is a plant native to eastern North America, mainly from an area east of the Mississippi River, where it is widespread, and is found as far north as Quebec and as far south as Florida.
This plant is rarer in east-central Illinois and southern Illinois while it is absent in the rest of the state.
Its natural habitat is the nutrient-rich mesic forests, most often in rocky and limestone areas. This plant tends to occur in oak-walnut and beech-maple woodlands, especially in areas where the sandstone substrate is not far from the soil surface. 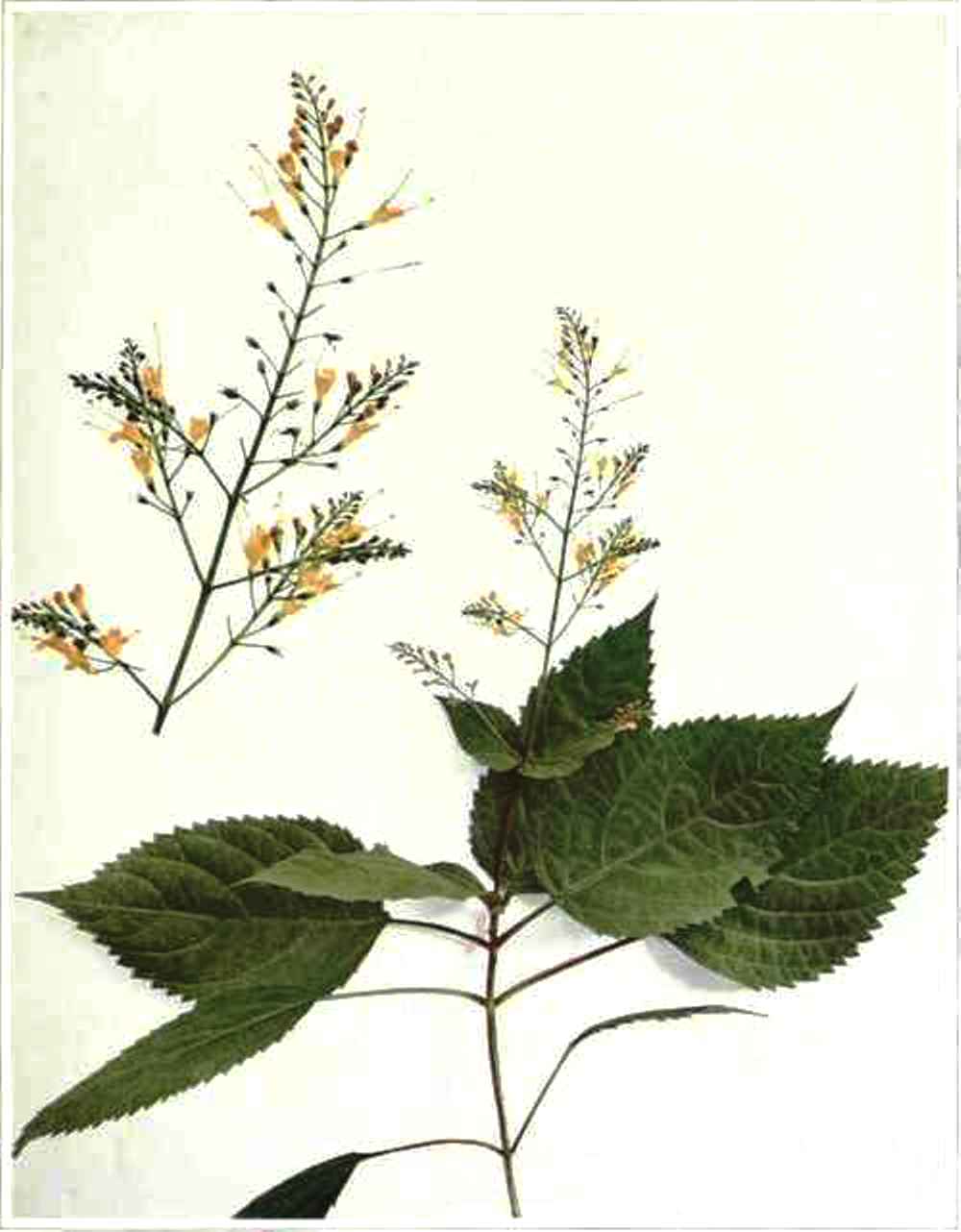 Description –
Collinsonia canadensis is a perennial herbaceous plant up to two meters high.
The root system consists of hard woody rhizomes with coarse fibrous roots. This plant often forms clonal colonies from its rhizomes.
The central stem is light green in color, with 4 rounded corners with shallow channels along the sides and usually unbranched; is hairless or moderately pubescent.
The leaves are in opposite pairs along the entire length of the stem. The leaves are 5-15 cm long and 4-20 cm broad, usually oval in shape and roughly serrated-crenate along the margins. The tips of the leaves are usually acute, while the bases of the leaves are rounded wedge-shaped. The upper leaf surface is medium to dark green and glabrous to pubescent sparsely short, while the lower leaf surface is light greyish green, hairless to sparsely pubescent and glandular-dotted (appearing as sparkling spots in bright light ).
The petioles are narrow and 1.3 – 5 cm long, light green and hairless to moderately pubescent; sometimes the tallest leaves are sessile or nearly so.
The central stem of this plant ends in a spike-shaped raceme or a pyramidal panicle of flowers (depending on the strength of the individual plants).
The individual panicles are up to 20 cm long and 15 cm wide, consisting of a central stem and several lateral branches that become progressively shorter towards the top.
The individual flowers are about 8–13 mm long and consist of a short tubular bell-shaped green calyx with 5 teeth, a two-lipped tubular corolla that is predominantly cream or yellow in color, 2 persistent fertile stamens, and a styled ovary slender also persistent.
The calyx is minutely pubescent and glandular-pointed; it has 2 linear-lanceolate lower teeth and 3 linear-delta upper teeth; the lower teeth are longer than the upper teeth. The calyx also has 10 narrow longitudinal ridges which are dark green in color. The corolla has a narrow tubular base, but becomes wider and more trumpet-shaped towards the mouth with 5 enlarged lobes (2 upper lobes, 2 side lobes and 1 larger lower lobe).
The upper and lateral lobes are oval or delta-oval in shape, while the lower lobe is violin-shaped, mostly white, and strongly fringed along the outer lip. Sometimes there are reddish streaks or bars along the upper and middle lobes of the corolla, while spots or streaks of faded red may appear towards the base of the lower lobe. The throat of the corolla is a little wider than it is high, where there is a patch of thin white hairs.
The filaments of the stamens are white-light yellow or light greenish yellow, while the fertile anthers are white or light yellow. The stylus is slender and dark red in color and usually bent towards one of the stamens.
The flowering period (lasting about 3-4 weeks) occurs from mid-summer to early autumn.
Subsequently, after the fertilization of the flowers, small peanuts are formed (0-2 peanuts per flower) which develop inside the enlarged calyxes. The individual peanuts measure about 1.5 mm and are a little flattened globe-shaped and dark brown in color.

Cultivation –
Collinsonia canadensis prefers a substrate consisting of a sandy and humid peat but is easily cultivated in normal garden soils as long as they are not dry. It grows well in partial shade.
The plant can be propagated by seed, both in late autumn and in spring, although its germination may be slower.
The transplant should preferably be done in spring or early summer of the second year.

Customs and Traditions –
Both the flowers and leaves of this plant have a lemon or lemongrass scent.
The whole plant, but especially the fresh root, is alterative, antispasmodic, diaphoretic, diuretic, sedative, tonic, vasodilator and vulnerary.
From the roots a strongly diuretic tea is obtained which is precious in the treatment of all disorders of the urinary system and rectum and is used in the treatment of hemorrhoids, indigestion, diarrhea, kidney disorders, etc.
It has been shown to be effective in the treatment of irritable bowel syndrome, mucous colitis and varicose veins.
The root is rarely used alone, but is contained in remedies with other herbs, especially Aphanes arvensis, Eupatorium purpureum and Hydrangea arborescens.
The roots contain more than 13,000 parts per million of rosmarinic acid, the same antioxidant found in rosemary. Fresh leaves are highly emetic.
Collinsonia canadensis was used by Native Americans to treat a variety of ailments. However, European-American settlers in North America did not often use this species after initially discovering it; its use resumed after the mid-1800s when it regained popularity as a medicinal herb.
As for the precautions in the use of this plant, it is emphasized that minimal doses of fresh leaves can cause vomiting, although the root is well tolerated by the body. In addition, a possible increase in blood pressure may occur.

Preparation Method –
The leaves of Collinsonia canadensis can be infused into tea and the underground stem was once used as a diuretic, tonic and astringent.
A poultice of leaves or roots is also applied to burns, bruises, sores, sprains, etc.