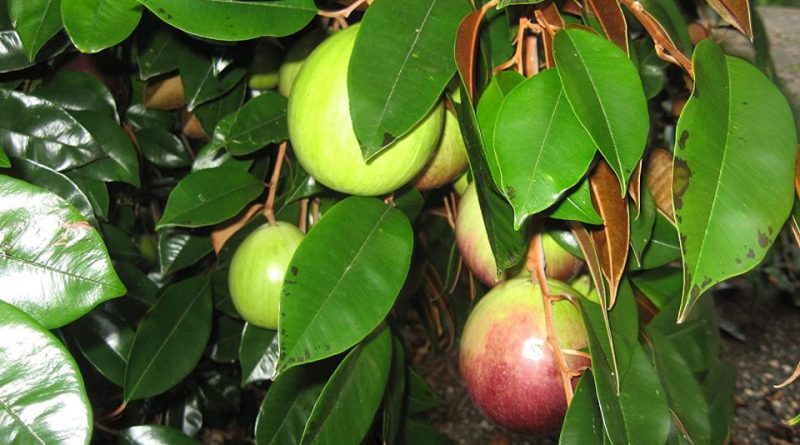 The Star apple (Chrysophyllum cainito L., 1753) is an arboreal species belonging to the Sapotaceae family.

Etymology –
The term Chrysophyllum comes from the Greek χρυσόϛ chrysós gold and φύλλον phýllon leaf: many species belonging to this genus have a tomentum of golden hairs on the underside of the leaves.
The specific Cainite epithet is the term used for this plant from the Arawak language spoken by the peoples of South America, eastern Venezuela, Guyana, Suriname and French Guiana.

Geographic Distribution and Habitat –
Chrysophyllum cainito is a plant that grows in warm humid climates at latitudes below 25 N and 20 S. The tree is native to the Greater Antilles and West Indies and has spread to the plains of Central America where it is now grown in all the tropics, including Southeast Asia. 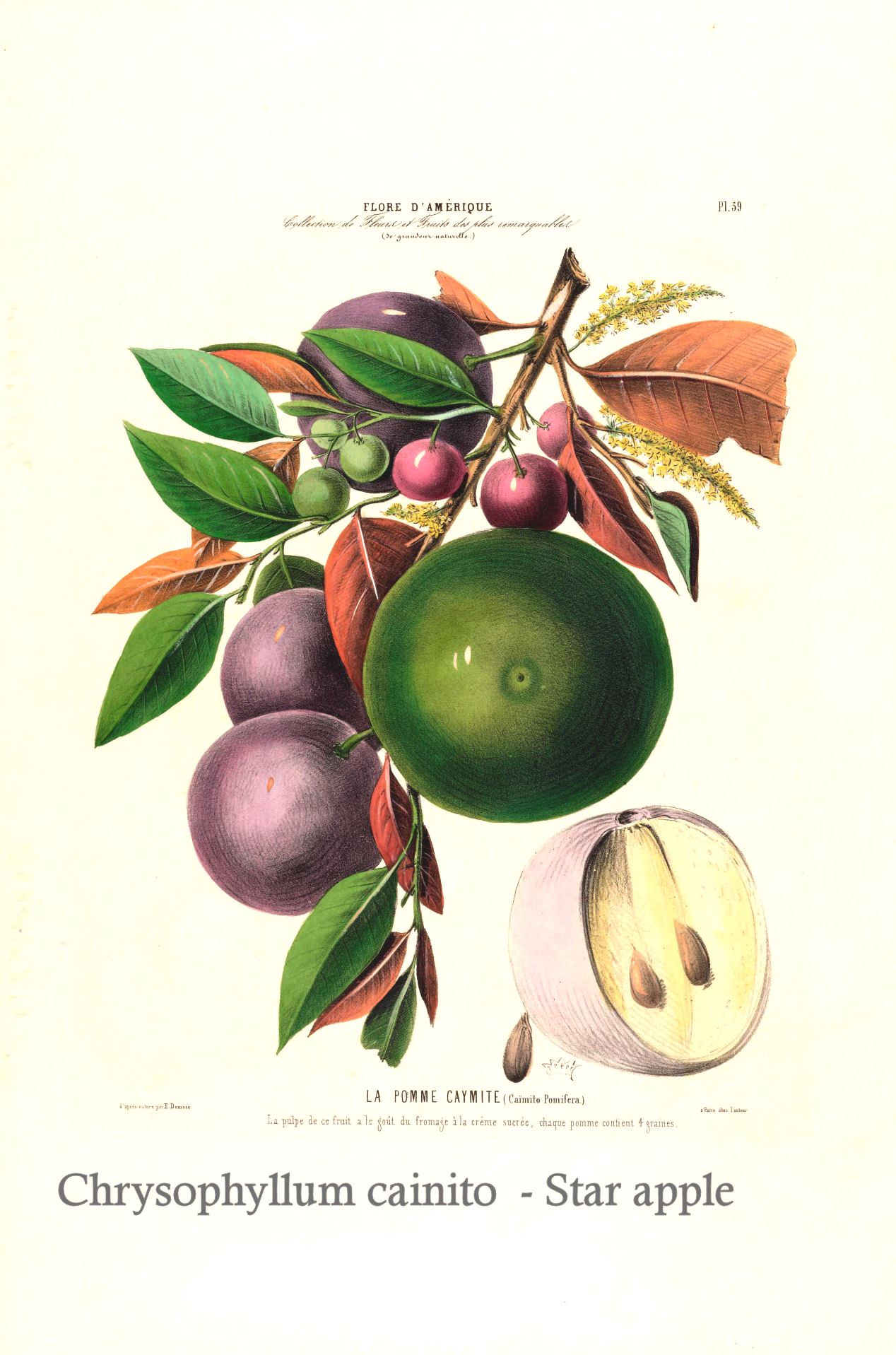 Description –
Chrysophyllum cainito is a tree that reaches 20 m but can also reach 30 m in height with rapid growth.
The trunk reaches a maximum of 1 m in circumference and is short with branches that immediately develop in width and give an expanded appearance.
A latex exudes from the wood.
It has bright green leaves that are decorative in the upper part and gold in the lower part; these are perennial, with an oval shape and about 10 cm long and 5 cm broad.
The flowers are small and vary in color from yellow to pink.
The fruits measure 6-8 cm, are round and with a skin that can be purple or green, depending on the variety, which contains a lot of latex and is not edible.
The seeds are 5-10, brown, gelatinous and hard.

Cultivation –
The Star apple is cultivated for the production of its fruit: the cainetta.
This plant also seems to adapt to some subtropical environments, in fact it produces well in Florida and Northern Argentina.
Instead it suffers excessively prolonged periods of temperatures close to 0 ° C, while adult plants are killed already at -2 ° C, which makes it difficult almost everywhere to cultivate it outdoors in the latitudes of the Mediterranean.
The cainetto starts producing fruit from the seventh year and is self-fertile.

Customs and Traditions –
Chrysophyllum cainito is known by various names also depending on the countries or populations that cultivate it.
It is also divided into two macro-varieties. The purple one has a thicker rind and a firmer and darker pulp, the green one has a fine rind and a more liquid and clear pulp. In Florida a morato fruit cultivar called “Haitian Star Apple” is occasionally bred, with seedlings originating in Haiti, which is the one found sporadically in the Miami markets: this produces 7 cm fruit, of excellent flavor and regularly shaped. spherical.
The fruits are used as fresh dessert fruit; they have a sweet taste and are often served cold.
In addition, the infusions of the leaves have been used against diabetes and joint rheumatism.
The fruit has antioxidant properties.
The bark is considered a tonic and stimulant, and a decoction of the bark is used as an antitussive.
The seeds are used in Venezuela as a diuretic and a febrifuge.
In Cuba, a decoction of the leaves is used as a remedy for cancer, while a decoction of the bark is used as an antitussive (cough suppressant).
Other uses of the fruit see it employed in the treatment for diabetes.
As mentioned, there are some varieties that in summary are distinguished by the color of the fruit which can be of three colors: dark purple, greenish brown and yellow.
The purple fruit has a denser skin and texture while the greenish-brown fruit has a thin skin and a more liquid pulp; the yellow variety is less common and difficult to find.

Preparation Method –
Its leaves and bark are used for medicinal purposes, especially in the traditional medicine of the countries of origin.
The pulp of the fruits being juicy, refreshing and with a delicious aroma, makes this fruit one of the best in the American tropic eaten fresh or even served in cold desserts.